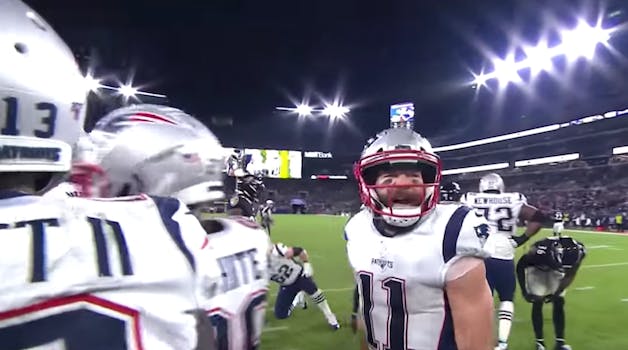 How to stream Patriots vs. Eagles live

The New England Patriots are going to be just fine. For the Philadelphia Eagles, it might be a different story.

Before its bye last week, New England looked very mortal against Lamar Jackson and the wildly-productive Ravens rushing attack. No teams have really had an answer for Jackson so far this year, though, and there is no need to panic in Boston.

By contrast, even though they won before their bye week, the Eagles continue to hang on by a thread this season. Though Carson Wentz has played well, considering his circumstances, the receiving corps has never been healthy or talented enough to produce. While the defense has played well, it hasn’t been enough to beat elite competition.

It’s going to be hard for an NFC team to make the playoffs with more than five losses this year, and that means the Eagles need to win two out of three tough games in the coming weeks. Philly still has to contend with the Seahawks and the Cowboys once the Patriots leave town.

It’s a desperate team against a dominant team this week. Here’s everything you need to know to live stream Patriots vs. Eagles, including what to watch for on the field.

There are a number of options for watching Patriots vs. Eagles on streaming platforms that carry CBS. However, consult a coverage map to see what game your regional channel will be playing.

Patriots vs. Eagles live stream: How to watch NFL online

New England Patriots vs. Philadelphia Eagles: What to watch for

It’s never a good thing to get demolished by a team in your conference. But it certainly isn’t the end of the world when you leave that demolishing with an 8-1 record.

The Patriots might take another loss or two this season simply because their offense isn’t that productive. Bill Belichick has coached a defense-first team this year, and for the most part, it has worked out. Even after the loss to the Ravens last week, New England is still number one in Defensive DVOA. If its season ends at 13-3 or 12-4, it will still be considered a Super Bowl contender heading into the postseason.

New England isn’t perfect. Its run defense has been weak despite the overall dominance of the unit. We saw this against Baltimore, but Nick Chubb ran for 131 against them and Frank Gore went for 109, so it isn’t a one-week issue.

Tom Brady has also been playing behind a particularly bad offensive line. Brady doesn’t take a lot of sacks or throw a lot of picks, so it isn’t as obvious as on other teams. A lot of the problem comes down to bad luck, but regardless of the reason, Brady has often been under siege.

Though the Eagles have won two in a row, things are not great in Philadelphia. This so-so offense really needed the boost of DeSean Jackson, but he returned from injury only to go down again. Now, the Eagles are probably wishing they had made a move or two before the trade deadline to give this passing game something extra down the stretch. Rumors of the Eagles begging retired receivers to get off the couch and come play for them underscore just how dire the need is for pass catchers in Philadelphia. (While he tries, running back and receiving threat Miles Sanders can’t do everything.)

On defense, Philadelphia just doesn’t look dominant enough to make up for this anemic passing game. There are great players like Fletcher Cox, but an improving pass rush has been undermined by dumb mistakes, particularly in the secondary and from some particularly weak linebackers.

If Miles Sanders and Jordan Howard have a great game and this pass rush comes alive, you could see the Eagles challenge the Pats. But, without a perfect game from Philly, you have to like Tom Brady and company to notch another win here.