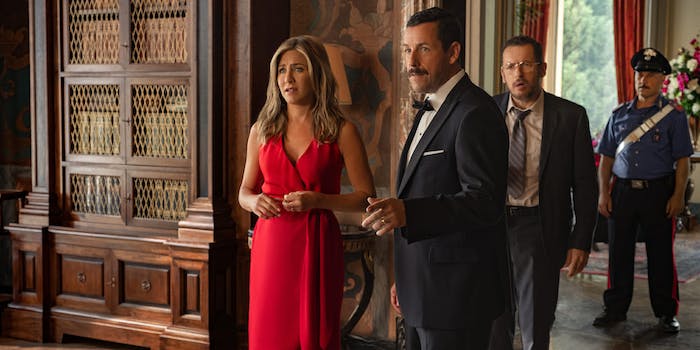 ‘Murder Mystery’ is a refreshingly fun whodunnit from Adam Sandler

The Sandler/Jennifer Aniston joint lets viewers in on the fun.

If you scan the internet, you’ll probably find plenty of reviews dunking on Adam Sandler’s latest Netflix movie, Murder Mystery. This isn’t one of them. Murder Mystery is an easygoing movie where, for the first time in a long time, Sandler lets the audience in on the fun. That doesn’t make the movie great, but it goes a long way toward keeping the viewer engaged.

I should confess upfront that I’m an easy mark for murder mysteries, and as such, I felt the film playing to my sensibilities. The Happy Madison brand of comedy stopped working for me back around Little Nicky, but after Sandler’s recent run including The Meyerowitz Stories, standup special 100% Fresh, and his return to Saturday Night Live, he’s built up some goodwill with me, which Murder Mystery maintains.

The film reunites Sandler with his Just Go with It co-star Jennifer Aniston to play married couple Nick and Audrey Spitz. Audrey is a hairdresser, and Nick is an NYPD officer who can’t pass his detective exam. They’re a cozy couple, the kind that buys each other Amazon gift cards as anniversary gifts because they’re both practical and out of ideas. They get knocked out of their comfort zone when Nick takes Audrey on an impromptu trip to Europe for their 15th anniversary. Never mind how he can swing a spur-of-the-moment trip abroad. The movie asks the question a few times but never answers it. It plays better if you think of it as a running joke. Besides, anyone familiar with Sandler’s comedies knows the stories usually take the path of least resistance.

Before Audrey and Nick can say bonjour, they’re on a yacht with the devilishly handsome Charles Cavendish (Luke Evans), a far cry from their modest New York home. The Spitzes meet the head of Cavendish’s family, billionaire Malcolm Quince (Terence Stamp), who has gathered everyone on the boat to insult them and tell them he’s cut them out of his will. It’s a delicious moment of schadenfreude, with a bunch of well-off leeches being put in their place. But just as Quince is about to sign his will, the lights go out, screams pierce the darkness, and somebody fires a gun. When the lights come on, Quince is dead on the ground with a dagger plunged into his chest—and his will unsigned.

With a room full of suspects, the game of whodunnit begins. Is the killer Cavendish, the scorned heir apparent? Or Grace (Gemma Arterton), the famous actress angling for a payday? Perhaps Quince’s son, Tobias (David Walliams)? Or the one-eyed, one-handed Colonel Ulenga (John Kani, combining the injuries of Happy Gilmore’s Chubbs and the alligator)? Nick, racked with self-doubt after failing his exams, and Audrey, emboldened by her knowledge of mystery books, take it upon themselves to crack the case.

Suffice to say, there are twists, red herrings, and late reveals to keep the mystery a secret until the end. Murder Mystery wears its genre tropes proudly. Credit goes to the self-aware screenplay by James Vanderbilt, who wrote the script for Zodiac and clearly knows his way around a convoluted mystery. (He also wrote the White House Down screenplay, but hey, they can’t all be zingers.) The movie runs through cliches like a checklist, with characters—usually Audrey—calling them out as quickly as they appear. You better believe someone is going to say, “The butler did it!” at some point.

Murder Mystery knows exactly what it is and doesn’t try to be anything else. It’s not a Scream-style satire; it just wants to spin an entertaining yarn and mostly succeeds, coming off as a JV version of Game Night. Director Kyle Newacheck keeps the plot moving, and the film’s aesthetic skews toward that of a sitcom, which makes sense given Newacheck’s work on Parks and Recreation, Community, and Workaholics, among others. The European locales look great, and Newacheck gets to flex his muscles with a couple of solid action sequences.

My biggest takeaway from Murder Mystery is that I have reached a place of zen with Adam Sandler. Yes, I would love it if he made more Punch-Drunk Loves and fewer Grown Ups. But that’s me being selfish. Sandler is living the dream, making movies with his friends in exotic locations. Who am I to begrudge him that? I would do the same thing in a heartbeat if I could. The resulting movies may be bad most of the time, but with Murder Mystery, the audience finally gets to share in the fun—and it makes a big difference.