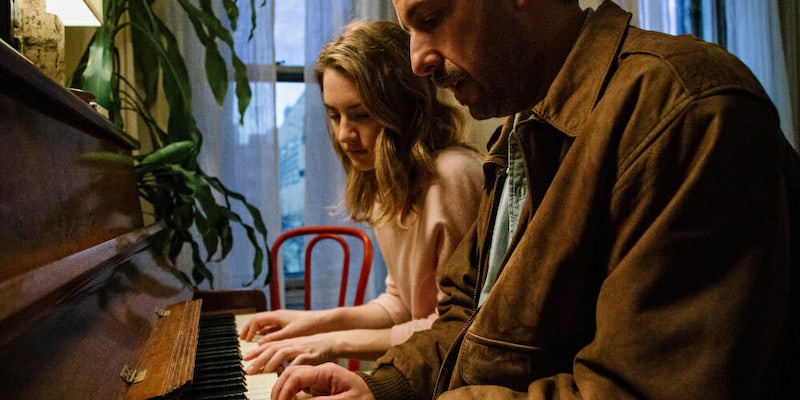 Can Netflix’s ‘The Meyerowitz Stories’ win Adam Sandler an Oscar?

Noah Baumbach has successfully usurped Woody Allen’s title as the greatest living director of New York comedies. He builds upon Allen’s legacy of neurotic, witty character studies set in that most cinematic of cities.

Baumbach’s latest love letter to New York comes in the form of The Merowitz Stories (New and Selected), about an artist patriarch played by Dustin Hoffman and his children. Hoffman’s Harold Meyerowitz is an aging sculptor, largely overlooked in his time. His children, played respectively by Ben Stiller, Adam Sandler, and Elizabeth Marvel, are all semi-dysfunctional thanks to Harold’s over- or under-involved parenting. The film forces them to reconnect over a potentially devastating illness and parse out their feelings toward a father whom they all have complicated relationships with.

Let’s get this part out of the way, since it’s the element of the film that most people have been talking about and which they will likely continue talking about over the course of the next few months. Sandler stuns in this movie. It’s unclear why he doesn’t pursue this type of role more often.

Whether it’s because he’s mad at the public for failing to recognize his intermittent attempts at serious acting, or because he has more fun shooting on location with his friends than challenging himself, or simply because he likes getting paid a lot of money, it continues to be hard to understand why Sandler forfeits opportunities to be great. For a long time, the story has been that he’s trying to convince everybody he’s a serious actor, waylaid by the long list of terrible films he’s forced to act in to maintain his stardom. But if you compare the work he’s doing in The Meyerowitz Stories to any one of his Netflix exclusives, another narrative emerges. Perhaps Sandler has always been a great actor, who’s determined to prove that he can still be funny, despite the fact that he shines far brighter when given dramatic roles.

As Danny Meyerowitz, a failed musician who’s never held a real job in his life, he wears a kind of sadness that only people whose true talent never got a chance to blossom exude. And he’s funny too! It’s not that Sandler can no longer be funny, it seems, but rather that he can no longer be funny in the sophomoric comedies he built his brand on. Which makes sense, given that he’s 51 years old. Sandler’s career choices haven’t made it easy to like or appreciate him, but remember this: If he doesn’t get a best supporting actor nomination this year, then the Academy will have made a serious oversight. (When the film played at Cannes, the Oscar buzz began in earnest.)

Not for nothing, but Stiller is good here too. As Matthew, he received all the attention growing up that Danny so desperately craved from his father, and yet he resents Harold all the more for it. Stiller’s a funny guy, but he’s most convincing on-screen playing cynical hotheads who can’t seem to be content in life.

Hoffman also does some of his finest work in years, in a role which he fits like a glove. Harold Meyerowitz feels like a part which only he could play, and in a movie with a weaker supporting cast, his is the performance people would be talking about.

As daughter Jean, Elizabeth Marvel gets short shrift among the cast, although she’s still terrific. Baumbach has done a great job writing women in films like Frances Ha and Mistress America. One wishes Marvel had a little bit more to do here. In the few scenes she does have, Marvel is lovable as a withdrawn loner who doesn’t know how to speak up for herself. A clumsy abuse storyline is trotted out later in the movie to give Jean more work, but it becomes an afterthought.

Grace Van Patten, who also appeared in the critically acclaimed but underseen Netflix film Tramps earlier this year, is a surprising delight as Danny’s daughter, Eliza. Their relationship is sweet and believable, and Pattern imbues Eliza with a strong mix of youthful intelligence and naivete.

Emma Thompson gets lost in the shuffle as Harold’s wife, Maureen. Plenty other actors pop up in fun cameos throughout The Meyerowitz Stories.

Baumbach’s always been great with dialog, writing lines which are effortlessly droll and subtly heartbreaking. Yet his screenplay is more stilted than his usual work. As a filmmaker, however, he’s come of age.

Baumbach shot on digital to great effect with Frances Ha (still his best-looking work, and best film overall), but has moved back to film since, and while The Meyerowitz Stories is unlikely to earn Irish cinematographer Robbie Ryan any awards, it looks great. The movie falls somewhere in between the freewheeling camera of Frances Ha and the more restrained work Baumbach did on something like While We’re Young. Toward the end, his stylistic choices get the best of him. He trolls the audience with fadeouts: There’s one particularly aggressive zoom at the end which seemingly has to be the end of the movie… and then it goes on for several more minutes.

The Meyerowitz Stories (forget about that pretentious subtitle) is still effective. He’s stepped into the ranks of the best filmmakers of the era. Netflix bet big on two auteurs at Cannes, and both of its gambits paid off with great films.

As The Meyerowitz Stories takes a dark turn in its second half, Baumbach gives us a thoughtful meditation on the challenge of letting the pain caused by a parent go, even when that parent is still alive. As a comedy, it certainly isn’t a laugh riot, but damned if it doesn’t leave an impression.