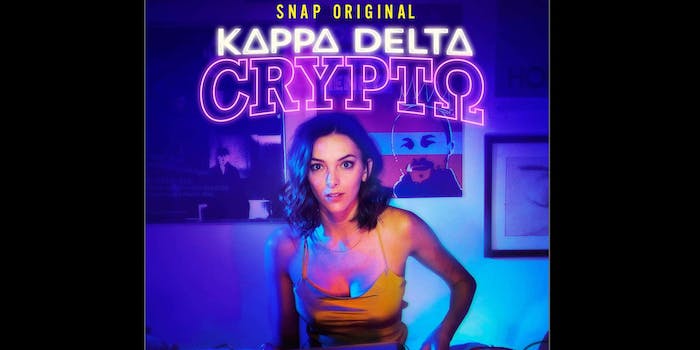 The show centers around Maddie Sullivan, a sorority girl and a hacker and cryptographer who gets recruited by the FBI.

Kappa Delta Crypto is the story of Maddie Sullivan, a California-based sorority girl who can also code and has excellent cryptography, hacking, and computer skills—which gets the attention of the FBI. It premieres on Snapchat Saturday. The Daily Dot spoke with L.A.-based screenwriter Katherine Craft, who created the show.

How long have you been working on the show?

Craft: The original idea was in January, but I started really writing it between February and March.

What gave you the idea for the show?

The show is produced by Indigo, in partnership between Snapchat and NBC. When Indigo and I were talking about ideas, they really wanted something that would promote young women in STEM. At the same time, they wanted to create a show that would be really fun and exciting while promoting women in STEM.

And we discussed several different ideas and this is the one we knew from the start that was a winner.

How was the process of bringing it together?

It was really centered around the main character Maddie and depended on figuring out her character—the sorority girl who codes and has cryptography skills. She holds the world that moves between those worlds.

We really thought of developing the FBI world and sorority world, which are widely different. She’s a codebreaker, she’s a little scammer, but she’s had to shoehorn her way into all of these worlds. She’s not a 100 percent typical sorority girl, or 100 percent typical computer science girl, or definitely not FBI agent material—until she shows she is because she has all these skills.

She doesn’t 100 percent fit in anywhere and she’s always navigating these spaces to figure out where she belongs, where she fits and how she can get those around her to accept her.

Is this your first Snapchat show? How was your experience?

Yes, it was really interesting to figure out how to write for this platform, because they all have to move really quickly.

On Snapchat, you really have to fight for your viewers’ attention. You have to keep moving, make sure you close the episode with a bang. And you shoot vertically, which was really interesting.

It’s just a different way of storytelling. I was a bit skeptical at first but it was awesome.

What kind of shows did you produce before?

I come from a non-profit social justice background. I’m a little bit new to TV writing. I was a playwright before this and did a lot of educational and social outreach theatre. I ran a theatre program for women at a county jail in Austin, Texas as part of a program in jails and prisons in central Texas.

I got my MFA in screenwriting at University in Texas and got into an HBO fellowship in 2017. That’s when what I moved out to L.A.

How was the transition for you?

I bring my viewpoints and myself into my writing and that is why Indigo wanted to work with me.

My samples are cheerful comedies about social issues and when you read my writing it’s very clear I have a strong viewpoint. They hired me because of that, not in spite of that. So I was encouraged to bring that into the writing and into the world of Kappa Delta.

Snapchat and Indigo were open to that. And we have a very diverse cast and gender roles. We work really hard to break stereotypes around characters.

So it’s been really interesting to go from non-profit to screenwriting. But I also think more and more of our audience are wanting to have these conversations and want to see it on screen.

This show is not a heavy social justice commentary. It’s fun and a comedy and you can do both—you can have really well-rounded characters and that in and of itself can start conversations.