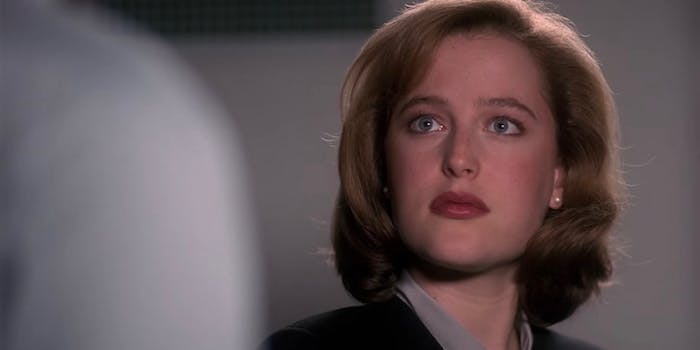 Dana Scully had a big influence on women starting careers in STEM fields.

X-Files’ FBI agent Dana Scully has long been one of television’s great protagonists and a revolutionary character for many fans, but now a new study reveals just how much influence Scully has had.

Women have long cited Scully, who was a medical doctor on top of working alongside Fox Mulder at the FBI, as part of the reason they chose a career in STEM (science, technology, engineering, and mathematics) or law enforcement. For many of those fans, the presence of Scully in male-dominated fields as a smart and intuitive agent (and not a stereotype) did wonders to change their perception of male-dominated fields. It’s even got a name—the “Scully Effect”—and it was even referenced by Gillian Anderson at San Diego Comic-Con in 2013 after she was asked about how often women told her that Scully influenced them to pursue science careers.

A new study conducted by 21st Century Fox, the Geena Davis Institute on Gender in Media, and J. Walter Thompson Intelligence now shows what fans have anecdotally known for years: Dana Scully has had a profound effect on female fans and women who went into STEM careers. More than 2,000 women participated by filling out an online survey, with participants all being old enough to watch The X-Files when it originally aired (ages 25 and older, with the majority of them being in a position to enter the workforce when it aired) and many of them had careers in STEM fields.

The effect that Scully had on women and female X-Files viewers, is expansive. She influenced how women viewed STEM fields, with two-thirds of participants saying that Scully “increased their belief in the importance of STEM” while roughly half said Scully was behind their own interest in STEM. Sixty-three percent of women said that Scully was a role model for them, and 63 percent of women said that Scully showed them it was possible to work and succeed in male-dominated fields. Her presence on television made her an instant favorite, with 91 percent of people who knew of Scully citing her as a “strong female character on television.”

The study shows a small sample of women—with an emphasis on women in STEM—but the effect Scully has had on women and STEM is already profound. And as Star Trek long demonstrated with many citing it as why they wanted to work at NASA, seeing that possibility (and seeing a reflection of yourself on TV) goes a long way.

You can read the full study here.