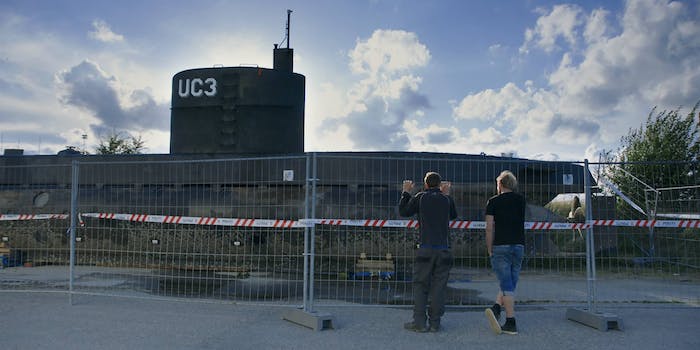 This documentary's existence is a marvel.

The most fascinating documentaries can often be the ones where the final product takes filmmakers where they didn’t expect to go. With Honeyland what started out as a commissioned documentary short about a river in central Macedonia turned into a devasting story about beekeeping, climate change, and ecosystems after the directors met who would become the film’s protagonist; the resulting documentary is all the more powerful for it, and Honeyland has since received two Oscar nominations.

Into the Deep, the feature-length documentary debut of Australian filmmaker Emma Sullivan, has a somewhat similar origin story, though its end results are far more nefarious and disturbing. She set out to film a documentary on the Danish inventor Peter Madsen and his efforts to build a rocket. She spent over a year filming him and his crew at the RLM Spacelab, but on Aug. 11, 2017, Madsen was rescued from his sinking submarine and Kim Wall, the Swedish journalist who had gone on the submarine with Madsen as part of a story she was writing, was nowhere to be found, leading to his arrest. Sullivan then pivoted to tell a story she never signed up for, and the fact that this documentary exists is astounding.

Danish inventor Peter Madsen was arrested for the disappearance of Swedish journalist Kim Wall. In the wake of a police investigation, employees are left to grapple with what they knew (and didn’t know) about the man they once admired.

Told through two timelines—before and after Aug. 10, the day that Wall died—Sullivan paints a personal and harrowing picture as she and the crew members Madsen left behind are forced to reckon with the fact that the man they admire turned out to be a monster.

If you paid any attention to this case as it unfolded, you already know how Madsen’s story ends: He was convicted for murdering Wall in April 2018 and is serving a life sentence in Denmark; according to a note in the documentary itself, footage Sullivan shot for what became Into the Deep was used to help convict him. So when you initially see footage of Madsen and his crew of unpaid volunteers and interns at RML smiling, laughing with one another, and goofing around in his lab down in Copenhagen, it’s completely jarring. Perhaps it’s because you had a different idea of who he was or how someone who would eventually brutally murder a journalist would act or sound.

Into the Deep eases you into Madsen’s inner circle, and it’s easy to see why so many people became enamored by him. They gravitated toward Madsen, they wanted to push scientific and engineering limits to make a difference, and when they’re working with someone like Madsen, they not might have to deal with the kind of bureaucratic bullshit that might’ve come up at a larger company. He’s charming, friendly, supportive, and you can see why a group of young engineers and scientists would revere him.

When they learn that Madsen is arrested in connection to Wall’s disappearance, a defensive wall starts to build, but Sullivan never vilifies Madsen’s colleagues. There’s no way that Madsen could be capable of killing someone, they tell each other with less certainty the more they say it; they lose faith in him as they learn more about the case and see the discrepancies. It’s a similar path that some people have taken in the Me Too era, the idea that someone can’t be bad because he was nice to them.

Part of that sympathetic edge is because she spends a lot of time immersing us into the inner workings of RML and the people really running the Spacelab. So when the gruesome details of Wall’s murder, the many, many lies Madsen tells investigators to try and save his own skin, and his damning internet history all emerge, you witness just how the rug was pulled from under their feet. The film is a little too long, but you can see where Sullivan is coming from in that Into the Deep wants to avoid framing staffers as being completely complicit. They fell for Madsen’s charm, just as Sullivan did—and it’s through the trust she built that Into the Deep is possible; Sullivan herself is often part of the story.

But now, Madsen’s older insights only raise flags as the increasingly horrifying realization that a more sinister side always existed on the surface arises; they reevaluate their interactions with him, seeing his narcissistic and predatory tendencies with new eyes. The clues were all right there, even if they could’ve never imagined that Madsen was capable of murder, and later in the film, Madsen’s musings on psychopaths prove downright prophetic.

We learn plenty about Madsen and the people who worked for him, but it only delves into who Wall was at the surface level and through her journalism. For much of the film, she’s something of a blank avatar that the crew can project upon—for example, they initially blame her when they still think Madsen is innocent—and it’s not until heaps of evidence piles up against Madsen that they begin to see her humanity; like the cases with many predators in the news, it takes a lot of evidence against Madsen including a dismembered body. One of Madsen’s volunteers is wracked up with guilt over Wall’s death because she realizes, after looking over texts Madsen sends to her shortly before Wall met up with him, that it could’ve easily been her who died in that submarine. But it’s hard to get a grasp on Wall herself solely through a film that largely deals with how she died.

With the story that Into the Deep does tell, the shadow of Kim Wall looms large, one that the documentary can never quite shake off. But the one left in its wake will nonetheless chill you to the bone.

Into the Deep premiered at the Sundance Film Festival.