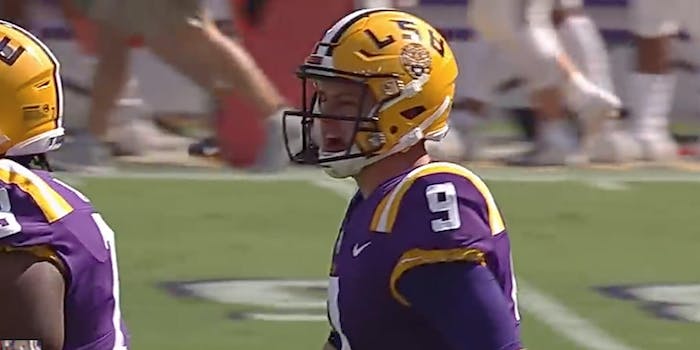 How to stream Florida vs. LSU

It's a Top 10 battle of SEC teams, as Florida tries to slow down Heisman candidate Joe Burrows and LSU in Death Valley.

Let the SEC madness begin! No. 7 Florida at No. 5 LSU commences the punishing high-stakes portion of each team’s schedule. LSU moved up from No. 6 to No. 5 after a 42-6 win over a talented Utah State team in what initially appeared to be a somewhat interesting game. Florida remained at No. 12 following its 24-13 home win over Auburn, arguably the Gators’ biggest victory since Urban Meyer was still running the show.

The Gators held the previously-undefeated Tigers scoreless in the second half, making great use of a pass rush that assisted in its three interceptions on the backend. Florida began pulling away after a timely 88-yard TD scamper by Lamical Perine, which put the Gators up two scores with less than 10 minutes left.

Quarterback Joe Burrow has continued his march toward the official Heisman shortlist, leading the Tigers to 601 total yards of offense (versus 159 from Utah State). It was a straightforward woodshedding, serving as a walkthrough for LSU’s starters.

Figuring to be a close game throughout, LSU sits uncomfortably as the home favorite, though ESPN’s Football Power Index significantly favors LSU with a 76 percent chance to win. However, expect a serious challenge from Florida on Saturday night in Death Valley. One critical note: Special teams could be the difference, and the Tigers have an edge. LSU kicker Cade York has hit 34 of 35 extra points and seven of eight field goal attempts (with a long of 48).

Burrow will have a tough time negotiating space against the Gators’ fearsome front seven to throw to his dynamic receivers.

Florida vs. LSU: What to watch for

Talk about the rubber meeting the road – LSU boasts the nation’s best offense, but Florida is in the top 10 in points allowed. The Gators are allowing just 183.3 passing yards per game, while leading FBS in takeaways (17) and interceptions (12) in 2019. Florida’s 26 sacks are tied for third nationally. Its 50 tackles for loss? Tied for fourth.

LSU will likely continue its aggressive downfield throwing, given that Burrows takes such good care of the ball. In fact, LSU has given the ball up only six times, and two were against Utah State.

Still, something says Florida’s dominant pass rush is going to put Burrow in some precarious spots, which means the Tigers’ running game—led by Clyde Edwards-Helaire—needs to be prepared to hold the Jonathan Greenard-led Gator defense from pinning its ears back on each play. This could be a breakout game for true freshman RB John Emery Jr.

Conversely, with QB Kyle Trask battling a knee sprain, Lamical Perine will need to provide balance on the ground to keep LSU off the field.

Holding the chalk line, LSU is a slight favorite at home, according to Odds Shark. But expect one the season’s best games, with the contest coming down to the wire and special teams likely coming into play.