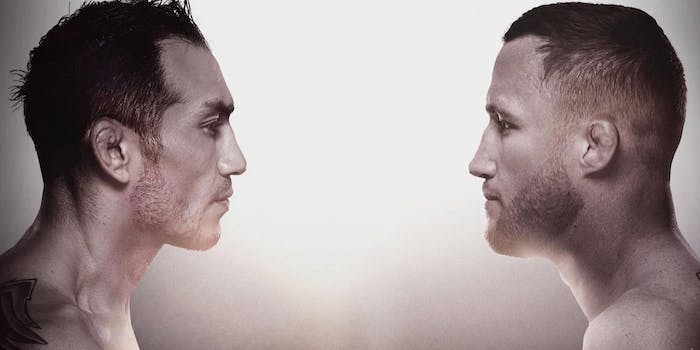 How to stream Tony Ferguson vs. Justin Gaethje in UFC 248

Ferguson is a whirlwind of unconventional attacks. And Gaethje is the hardest hitter in the division.

Not since the dark early days of MMA, when fights were always at risk of being shut down at the last minute by appalled local governments or wary state athletic commissions, has there been a UFC event as star-crossed, storm-blown, and uncertain as UFC 249—which will finally take place on Saturday with a main event of Tony Ferguson vs. Justin Gaethje.

Originally scheduled to take place April 18 in Brooklyn, New York, and featuring a long-wished-for fight between lightweight champion Khabib Nurmagomedov and No. 1 contender Ferguson, the event was wiped out, along with the rest of the sports world, by the coronavirus pandemic. At first, UFC President Dana White—a man who exhibits all the braggadocio, bullying, and delusional self-regard of a born fight promoter—did all he could to make sure the show went on. He defied government guidelines, public-health warnings, common decency, and common sense in an attempt to bolster the UFC brand; tried to make good on billion-dollar deals with the promotion’s owners and broadcast partners; and attempted to prove his personal toughness in the face of the worst global health threat in 100 years.

In the end, though, even White had to concede to the harsh reality the rest of the world had acknowledged weeks before: There could be no sporting events in the age of social distancing, not in Brooklyn, not on a Native American reservation, not even on a private island. White may have kept pushing even after Nurmagomedov got locked down in his native Dagestan, but by then, the writing was on the wall.

One month later, and with the world taking its first baby steps back toward something like normalcy, it appears White will actually get his wish and the UFC will be the first major sports promotion to return to action—though not without some serious alterations and compromises.

To start with, the main event will no longer feature Nurmagomedov (thus making UFC 249 just the latest in a long series of planned fights between him and Ferguson to get canceled). The champion is still stuck at home so he will be replaced by Gaethje, who will fight Ferguson for an interim belt. In addition, the event will take place not in a roaring Barclay’s Center but in the eerie silence of the VyStar Veterans Memorial Arena in Jacksonville, Florida.

Even in Florida, though, there are limits to how open economies can be in May 2020, and, so far anyway, Gov. Ron DeSantis is drawing the line at arenas full of potential virus carriers. In addition, all the fighters will undergo daily COVID-19 testing, temperature checks, and dietary screenings. To ensure social distancing, they’ll be staying in a hotel otherwise free of guests, they’ll have all their food delivered to their rooms, and they’ll be assigned their own workout rooms and saunas for weight-cutting.

Whether you think such precautions are adequate for pulling off a sporting event in the middle of a pandemic is probably largely an indicator of your political disposition. But let’s put aside for a moment the social risks of flying dozens of fighters and coaches and officials from around the country and exposing them and their families to countless non-MMA-related strangers (and vice versa). Instead, let’s focus on the far more predictable and pleasurable and far less morally dubious risks involved in an MMA match.

Because, even forgetting the pandemic, the fight between Ferguson and Gaethje will feature more of them than your average cage match. Ferguson is a whirlwind of unconventional elbow attacks, spins, and even somersaults that cause all kinds of damage to his opponents. While Gaethje may not possess Ferguson’s creativity, he’s the hardest puncher in the lightweight division, and he has leg kicks that break other fighters—first physically then mentally. Between Ferguson’s ability to cut and Gaethje’s to hobble, their meeting will be a bloody battle of equal and opposite fighting philosophies.

Under normal circumstances, it would be an absolute godsend for MMA fans. But these are the circumstances we’ve got. Whether UFC 249 is the joyous herald of a new, more open world or an act of colossal hubris with all manner of unforeseen but foreseeable consequences is anyone’s guess. In the meantime it puts devoted MMA fans bored by two months of quarantining in a moral quandary: forced to choose between the sport they love and their sense of shared humanity.

UFC 248: How to watch Ferguson vs. Gaethje

Thanks to a huge seven-year deal, ESPN+ is now the only way to watch UFC 249 (and all subsequent UFC PPVs). The good news: ESPN+ is now your one-stop shop for the MMA promotion’s most important fight cards. Here’s how it all breaks down:

In other words, you can buy UFC 249 for a one-time price of $64.99, but if you spend only $20 more, you’ll also receive one year of ESPN+ to go with it. That’s a $50 value, and if you’re a big MMA fan, that’s a nice deal. Along with all kinds of exclusive live events (see below), you can also watch plenty of UFC Fight Night events every year with ESPN+.

If you don’t currently subscribe to ESPN+—which now boasts more than 6.6 million subscribers—you can purchase UFC 249 from your desktop or smartphone here. If you already subscribe, you can easily buy the PPV from the ESPN app by simply clicking on the event in the ESPN+ tab.

One thing to remember: Only the UFC 249 main event and prelim cards will be featured on ESPN+, and you will have to pay the $64.99 PPV fee (full schedule and watch guide below). Here’s the main event card:

ESPN+ is ESPN’s subscription streaming service. It works as an extension of the ESPN app that you probably already have on your mobile device. Have you noticed the live events, articles, or series tagged with a gold “E+” that resides in the corner of the app? Those are the events that are locked behind the ESPN+ paywall. It’s literally thousands of broadcasts per year, including the aforementioned UFC Fight Nights and a bunch of exclusive Top Rank boxing events. You’ll also get all of the best 30 for 30 episodes, daily MLB action, every out-of-market MLS game, international soccer matches, and more college sports than you can dream of.

Unlike UFC PPVs in the past, your ESPN+ subscription will also allow you to watch the ESPN prelims for free. If you choose to watch it on the network on your TV, you’ll still need to have a cable or live TV subscription to view it beginning at 8pm ET. Here are the matches you’ll be able to watch on ESPN (and ESPN+ now):