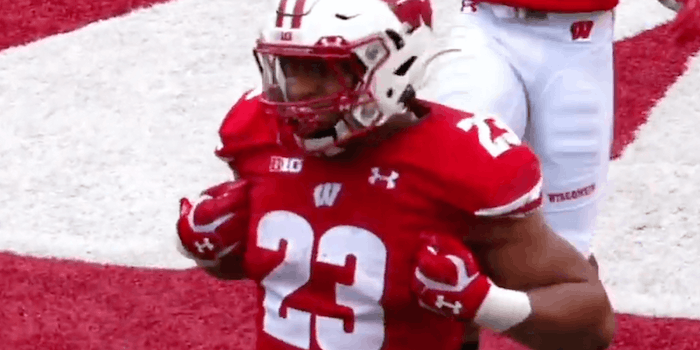 How to stream Ohio State vs. Wisconsin

Can the Badgers clean up their offensive miscues and play spoiler?

The shellshocked No. 13 Wisconsin Badgers attempt to right the ship against the No. 2 Ohio State Buckeyes, at Ohio Stadium, in Columbus, Ohio.

Wisconsin’s tragic 24-23 loss to Illinois (a 31-point underdog) was easily the biggest upset of the season, punctuated by the letdown of the Badgers’ elite defense. Heisman Trophy candidate Jonathan Taylor ran for 132 yards on 28 carries and a touchdown—but fumbled in the fourth quarter. Wide receiver Jake Ferguson grabbed five passes for 77 yards and a touchdown. Quarterback Jack Coan mostly played well, completing 75% of his passes for 264 yards and a TD. However, another late-fourth-quarter turnover—a costly interception—put Illinois in position to kick in the game-winning field goal.

The unfortunate reality: the Badgers have a long history of dropping games to teams that have no business being competitive with them.

Wisconsin averages 42.5 points a game on 447 yards a game on the season—led in principal by Taylor, who’s rushed for 136 yards per contest. Wisconsin, interestingly enough, leads FBS in total defense, allowing just 194 yards a game.

Ohio State, meanwhile, continues to shred opponents into pulp, including its 52-3 domination of Northwestern. QB Justin Fields led the Buckeyes with 194 yards with four touchdowns. Running back J.K. Dobbins scampered for 121 yards and a touchdown, with another 30 receiving yards and a score. Master Teague III also tallied 96 yards and a touchdown. The Buckeye defense allowed just 199 total yards.

Fields, the transfer from Georgia, has been overwhelming good, with 1,492 yards and 22 touchdowns this season—with just one interception. Dobbins has also been stellar, pacing the Buckeye ground attack with 947 yards and seven scores.

Ohio State, in hot pursuit of a College Football Playoff berth, continuing to handle business as a championship-level team should win. For Wisconsin to play spoiler, it will have to clean up the preventable miscues and create at least two turnovers defensively.

Hulu with Live TV includes sports programming among its offerings, including ESPN and FS1, and as a subscriber to the service, you’ll get free access to Hulu’s sizable on-demand library. (Check out the full list of Hulu Live TV channels.

Wisconsin vs. Ohio State stream: What to watch for

The major key will be in Wisconsin’s ability to put Ohio State in forever-long fields, and, in turn, keep its own as short as possible. The Badgers have the first-ranked defense in the country but don’t have the explosive offense necessary to allow for any mistakes. Ohio State, however, does with Fields and Dobbins in tow. Plus, its defense is also pretty good—as in second in the nation, behind Wisconsin.

Coan’s passing threat, a relative rarity in Wisconsin’s ground-oriented history, has to be effective for the speedster Taylor to find any room to run free. For the Buckeyes, it will be tough sledding offensively—at least tougher than usual—as a charged-up Badger defense looks to upset the apple cart.

Holding the chalk line at home, the Buckeyes are a 13.5-point favorite, according to Odds Shark. As long as they don’t lay down, the more explosive Ohio State should slowly walk away into a comfortable victory.