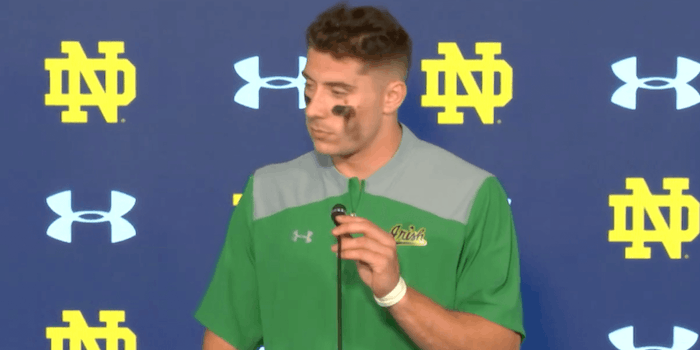 How to stream Notre Dame vs. Michigan

Both teams will have their hands full in this massive rivalry.

Fighting for a College Football Playoff berth, No. 8 Notre Dame Fighting Irish visit the “Big House” to take on No. 18 Michigan Wolverines, at Michigan Stadium, in Ann Arbor, Michigan on Saturday.

Riding a three-game win streak and a much-needed bye week, the rested Fighting Irish will be amped and ready to dominate their stretch run. Fortunately, the rest of their schedule after Michigan—Virginia Tech, at Duke, Navy, Boston College, at Stanford—is wholly manageable, and head coach Brian Kelly’s team will be heavily favored the remainder of the way.

However, with no conference championship game, Notre Dame faces an uphill battle. The Wolverines are 5-2 and are predicted to lose to the Irish and later, Ohio State. They almost need Michigan to beat Ohio State and Virginia and Georgia (who they lost to in Week 3) to win out in order to make the playoff.

Michigan looks to rebound from a 28-21 loss to Penn State. The Wolverines had 417 combined yards, 26 first downs, and a 15-minute edge in time of possession. The Wolverines were in it at the end but just got a little too far behind from the jump.

The inconsistent Shea Patterson-led offense averages 29 points, on 238 passing yards and 154 rushing yards per contest. Defensively they’ve given up 19 points a game but are allowing just 284 yards a game–which says their defense has fought against the short fields the offense creates with its turnovers and faulty special teams play.

If Michigan can build on its second-half showing at Penn State, Notre Dame will have its hands full.

FuboTV is a solid TV streaming service option, whether your tastes run to entertainment (AMC, Syfy, FX), news (MSNBC, CNN), or sports (NBA TV, NFL Network). If you’re a soccer fan, however, it will appear tailor-made for you, with all Champions League matches (via the TNT and TUDN family of channels), NBC and NBCSN, 10 BeIn Sports channels, FS1 and FS2. If you can’t watch a match live, FuboTV offers a three-day replay for each match and 30 hours of cloud DVR. (Check out the complete FuboTV channels list.)

Notre Dame vs. Michigan stream: What to watch for

The major key in this contest is whether the Wolverines can get it going early. Patterson stayed connected with his playmakers in the second half of the Penn State loss. If he and running back Zach Charbonnet can push the offense downfield during the first quarter, a minor upset could be in the making.

But QB Ian Book and Notre Dame will play with a specific urgency that Michigan hasn’t seen yet, which could spell disaster. Chances of the Irish coming out flat aren’t particularly high.

Notre Dame is just a 1-point favorite, according to Odds Shark. Expect a hard-fought game where the old-school notions of the “turnover battle” and field positioning win the day.