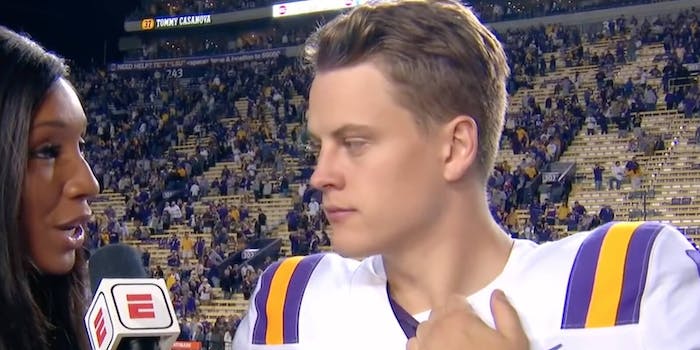 How to stream LSU vs. Auburn

Can Auburn hold off the explosive LSU offense?

The No. 9 Auburn Tigers travel into “Death Valley” in Baton Rouge, Louisiana, in a critical SEC matchup against No. 2 LSU Tigers on Saturday.

Auburn will arrive with a 6-1 record, following a 51-10 demolishing of Arkansas. Quarterback Bo Nix hit 12 of 17 passes for 176 yards and three scores, with wide receiver Seth Williams catching two of them along with 90 yards receiving.

The Tigers held the Razorbacks to just 234 yards of offense. Senior edge rusher Marlon Davidson contributed five tackles, three tackles-for-loss, two sacks, and a forced fumble. The drubbing only made highlights via a botched fake punt.

The LSU Tigers come into this matchup with a 7-0 record, after a comfortable win over Mississippi State, 36-13. Heisman favorite Joe Burrow hit on 25 of 32 pass attempts for 327 yards and four TDs. WR Justin Jefferson has led LSU with eight catches for 89 yards and a score. The defense forced the Bulldogs into three turnovers, with junior safety Grant Delpit finishing with 11 tackles.

War Eagle has a significant hill to climb: LSU has usually beaten Auburn at home. Usually means it’s won the last nine meetings by an average of 16 points.

Auburn’s chances of holding off LSU will live and die on its ability to simply keep Burrow off the field as much as possible. He’s thrown for 2,484 yards, good for second in the country, leading the nation’s second-ranked total offense

Auburn vs. LSU: What to watch for

To reiterate: Auburn’s chances of holding off LSU will fully depend on its ability to simply keep Burrow off the field as much as possible. This means using that 11th-ranked third-down defense to get the Tigers into punting situations, or long field goals. If and when Auburn gets behind, the Nix-led offense isn’t explosive enough to quick-charge them back into games. The two-headed monster of JaTarvious Whitlow and Kam Martin have to rush for 200 yards or better and eat up the clock.

Talented defensive lineman Derrick Brown has to get to Burrow, and often, to shrink up the pocket. LSU, on the other hand, appears to have the talent advantage but will need to play up to it to ensure victory. Burrow and company are the better team but shouldn’t let Auburn hang around, or they’ll be in for a rude awakening.

Holding the chalk line in the home digs, LSU is a 10.5-point favorite, according to Odds Shark.