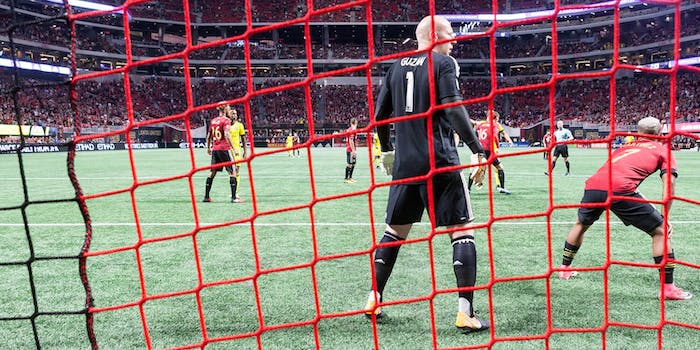 How to stream Atlanta United vs. Toronto FC in the MLS playoffs

Who will join Seattle for the MLS Cup?

Top-seed NYCFC got knocked out of the Eastern Conference playoffs by Toronto FC en route to where it finds itself now: In Atlanta to face Atlanta United for the right to join Seattle in the MLS Cup. It’s an Eastern Conference Championship featuring the most recent two champions. Atlanta defeated the Portland Timbers last year in its home stadium, whereas Toronto won in its home stadium in 2017, overcoming the Sounders in a rematch of the 2016 MLS Cup it lost in PKs.

With a trip to the MLS Cup final on the line, here’s how to stream Atlanta United vs. Toronto FC live.

The match is on FS1; the following services provide a one-week trial and therefore an easy way to this and other MLS playoff matches live.

PlayStation Vue is still (for the next few months, at least) a fantastic option for soccer fans who already own a PlayStation console, but this streaming platform is available on a variety of devices. ESPN and FS1 (where MLS games feature) and NBC and NBCSN (where the Premier League live) are part of the Core package of channels that offer soccer and other sports programming, and the options increase at the Elite and Ultra levels.

YouTube TV is a great option for soccer fans, including ESPN and FS1 for MLS matches, NBC and NBCSN for Premier League matches, and broadcasting partnerships with three MLS teams. (Take a look at the full list of YouTube TV channels here.)

Atlanta United vs. Toronto FC: What to watch for

Though Atlanta United had a rough transition to life with new head coach Frank de Boer, it’s made that transition now. Josef Martinez saw his goal record from 2018 snapped by Carlos Vela, but he still put up 27 goals in 29 matches—and made a quick recovery from a late-season knee injury many feared would end his 2019. He’s now amassed a three-year total of 77 goals in 83 matches. While the Five Stripes have other talented players, including South American Player of the Year Pity Martinez and do-everything midfielder Julian Gressel, Atlanta’s fortunes often hinge on what the dynamo up top does.

Toronto FC, meanwhile, may be without its first-choice striker, USMNT veteran Jozy Altidore. It’s been a Canadian national, Jonathan Osorio, who’s proven vital in this postseason, exploding for a brace in extra time in TFC’s weird win over DC United. Alejandro Pozuelo, who arrived this season to make up for the loss of Sebastian Giovinco, got a brace in the team’s most recent playoff win, the 2-1 knockoff of NYCFC at Citi Field.

If Atlanta wins Wednesday, it’ll host MLS Cup for a second straight year; if Toronto’s victorious, it’ll head to Seattle for the rematch of the ’16 and ’17 MLS Cups it hosted.