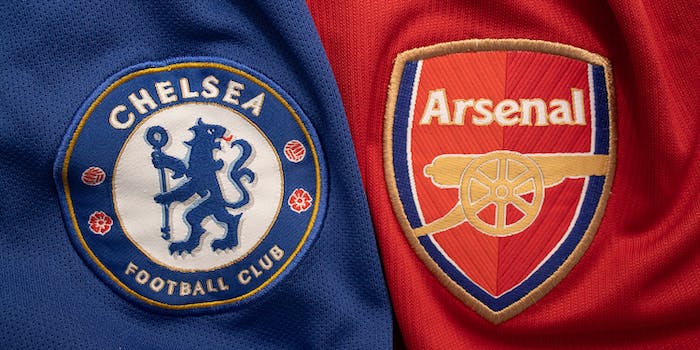 How to stream Arsenal vs. Chelsea live

The London rivals face off in a derby both teams are desperate to win.

Arsenal will host Chelsea on Sunday in one of the most inviting matchups of the Premier League holiday fixtures. Both teams are coming into this match hungry for a win. Chelsea dropped its Boxing Day match to Southampton 2-0, and has now lost five of its last seven matches. Arsenal started the Mikel Arteta era on Boxing Day as well, drawing Bournemouth 1-1 on the South Coast to continue a bad trend—the Gunners have just one win in their last 11 matches.

Certainly, Arsenal fans will look for a win in Arteta’s home managerial debut, while Chelsea wants to at least maintain its hold on fourth place.

Here’s everything you need to know to stream Arsenal vs. Chelsea live.

Sling TV provides two base channel package options, each priced at $30 per month. Sling Orange includes three ESPN channels, while Sling Blue includes sports channels like NBCSN (where many Premier League matches appear), NFL Network, and local channels. (Sling Blue customers in select markets get NBC, where some matches appear; see if yours has it here. Sling Blue also brings Fox News Channel, MSNBC, and Headline News as part of its regular slate of channels, with Foc Business Channel available for those who get the Sling Blue News Extra add-on.

Arsenal (Last 5 Premier League matches: LWLDD) managed its third result in the last four matches, which is a positive. Yet the draw against Bournemouth brought Arsenal’s record to a very un-Arsenal-like 5-9-5. While Arteta may not be able to lift Arsenal back to the Champions League rung of the table this season, fans will look for more wins and soon, and doing it against its London rivals at home would be a welcome development.

Chelsea (Last 5 Premier League matches: WLLWL) has been either feast or famine of late. The Boxing Day loss was in part due to a three-man back line that worked against Wolves but didn’t work against Valencia in Champions League play and certainly didn’t work here. Chelsea certainly looked better against Tottenham Hotspur in its previous match out.