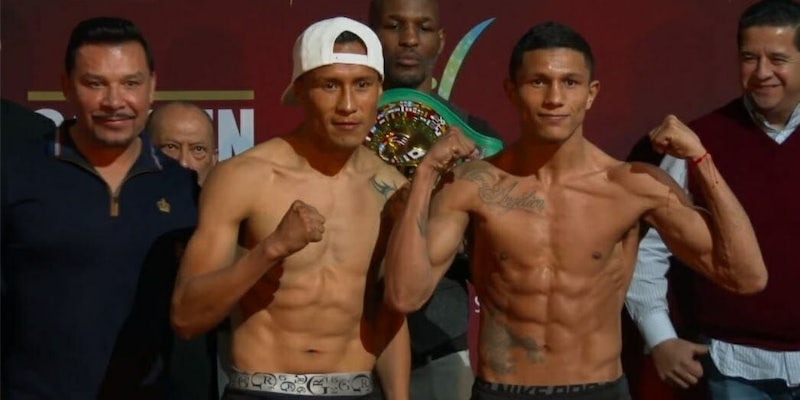 How to stream Miguel Berchelt vs. Francisco Vargas for free

It should be an epic 130-pound title rematch.

The Berchelt vs. Vargas 130-pound rematch, which you can live stream for free on ESPN, could tell us two things: whether Vargas, at the relatively advanced age of 34, has already been in too many damaging fights, and whether Berchelt is potentially good enough to take on Vasiliy Lomachenko in the future.

Either way, if the first fight was any indication, the rematch should be filled with power punches and perhaps multiple bloody faces. Here’s everything you need to know to watch the Berchelt vs. Vargas title fight on Saturday.

How to watch Berchelt vs. Vargas for free

Berchelt vs. Vargas is the main event of the ESPN (and ESPN Deportes) card. That broadcast begins at 10pm ET with the co-feature of Emanuel Navarrete vs. Isaac Dogboe fighting for a junior featherweight title opening the show. The undercard will be streamed on the ESPN+ streaming service beginning at 6:30pm ET (the entire card is listed below). Most of the major live streaming services offer ESPN, and all of the ones featured below include a free one-week trial.

The cheapest way to watch ESPN online (and keep viewing fights like Berchelt vs. Vargas) is through Sling TV. The Sling Orange package is only $25 per month and it includes ESPN, ESPN2, and ESPN3, along with a bunch of other great channels. If you really love sports, you might want to upgrade to Sling Orange + Blue (see above), for $40 per month. Sling TV is also currently offering a deal where you can subscribe for 40% off the regular price for the first three months of your subscription. (Here’s a complete guide to Sling TV channels and our Sling TV review.)

This service is great for those who want to stream live TV on a platform with nearly 60 channels and watch its massive on-demand library of movies, TV shows, and original series. Thanks to that versatility, Hulu with Live TV is a nice option. It’s also the best way to bundle your streaming services into one place. (Here’s the complete list of Hulu Live TV channels.)

If you want to watch live TV directly from your PS4, this is the best option for you. PlayStation Vue allows you to choose from four tiers of channels, but for Berchelt vs. Vargas, you can use the service’s basic package—which also includes ESPN, ESPN2, FS1, FX, Cartoon Network, and a lot more. PlayStation works with streaming devices like Roku and Amazon Fire products, but it also gets high marks for its compatibility with Kodi. You can see the full list of PlayStation Vue channels here. You can stream on up to five devices at once, and there’s also unlimited cloud DVR.

YouTube TV lets you add up to six accounts for every subscription, all of which come with free cloud DVR, and it puts all of your favorite channels in one place. It’s fantastic for convenience. Plus, if you’re a sports fan, specialty options like NBA TV and MLB Network are certainly worth considering.

To watch the entire undercard on Saturday, you’ll need to subscribe to ESPN+. The channel’s subscription service costs $4.99 per month (after a seven-day free trial), and it functions as an extension of ESPN’s main app and website, unlocking all sorts of exclusive live sports and original series. That includes plenty of UFC action and the entire 30 for 30 series. The undercard bouts start on ESPN+ at 6:30pm ET. However, the two main-event bouts will not be on ESPN+ and will exclusively be shown on the network.

Berchelt vs. Vargas: Why it matters

When Vargas faced off vs. Berchelt 28 months ago, he was coming off back-to-back Fight of the Year awards in 2015 and 2016, and he was already well-known for engaging in fights that can wear on a boxer’s mind, body, and soul. He simply didn’t have enough to fend off the younger Berchelt, who’d had less punishing battles in the ring. This is how Vargas was stopped.

Though Vargas has since won back-to-back fights against solid-but-not-elite-level competition, there is a real question whether his thrilling fights versus Takashi Miuri in 2015 (a ninth-round knockout win) and versus Orlando Salido in 2016 (ruled a draw) were so brutal that it will negatively affect the rest of his career.

“I’ve been patient,” he said. “I’ve been waiting for this fight for two years and now it’s finally here. It’s going to be a war. I did a few different things in preparation for this fight. I worked on different strategies, but we’ll see how the fight goes. You know, when two Mexicans get into the ring, they leave everything behind. My goal is to reclaim the world title.”

Since stopping Vargas, Berchelt has continued to impress, beating Miura by a wide unanimous decision (and sending him into retirement), stopping Jonathan Victor Barros, and knocking out Miguel Roman. All of them are really good fighters, and Berchelt blasted through each of them. He’s also talked about wanting to face Lomachenko, one of the best pound-for-pound fighters in the world.

“Francisco Vargas is a great Mexican warrior, just like I am,” he said. “I am training at my best to prove once again that I am not only better than him but that I am the best 130-pounder in the world.”