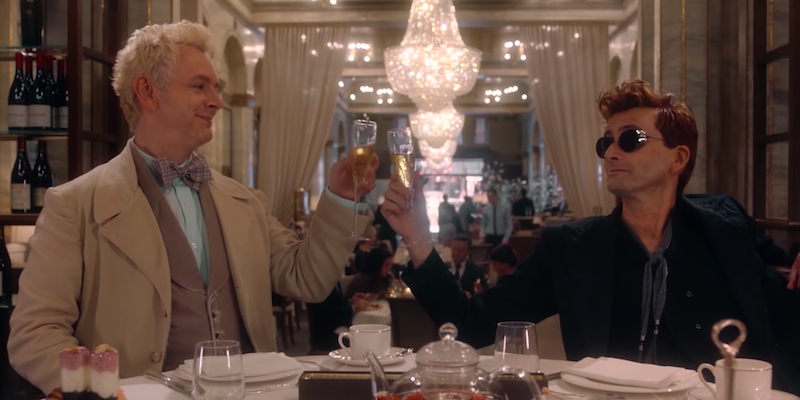 David Tennant and Michael Sheen team up to save the world in this adaptation of the 1990 novel.

A certain popular fantasy series has ended, leaving a hole for viewers who enjoy magic, mythical creatures, and the occult. There are plenty of other great sci-fi and fantasy shows out there (like The Magicians), but it’s also the perfect time to release a new series. Amazon Prime’s Good Omens, which arrives on the streaming platform on Friday, is a welcome addition to a genre that often takes itself too seriously. The six-episode series is based on Terry Pratchett and Neil Gaiman’s 1990 novel of the same name, but you don’t need to read the book to understand the plot of the show. Led by a stellar cast and imbued with playful touches, the series is a delightful comedy about the end of the world.

Good Omens follows a demon and an angel who have known each other for thousands of years. The pair teams up to stop the Antichrist—who gets switched at birth with a normal baby—from initiating Armageddon. Although the series centers around the world ending and the people who are trying to stop it, Good Omens is also a love story. David Tennant’s demon, Crowley, and Michael Sheen’s angel, Aziraphale, act like a long-married couple. Crowley calls Aziraphale his “best friend,” but the queer subtext is hard to ignore. The show never explicitly calls them a couple, but fans of the show will likely ship Crowley and Aziraphale. Gaiman responded to a fan asking if Crowley is gay in a 2017 Tumblr post, but he didn’t give a definitive answer. “Canonically, which is to say using the text in the book, you don’t get any description of Crowley’s sex life,” the author wrote. Perhaps we should be grateful that Gaiman didn’t go the J.K. Rowling route of revealing personal details about characters post-publication.

Whether you view the Crowley/Aziraphale relationship as romantic or strictly platonic, it serves as the heart of the show. Tennant, who excels at playing villains, is in his element here as a demon with a soft side. Sheen is wonderful as a buttoned-up angel who loves old books and fine dining. Although the characters are supposed to be on opposing sides, they rebel and work together. Neither Crowley nor Aziraphale agrees entirely with the instructions handed down to them from heaven and hell. Both sides want a war, but the demon and angel duo would rather continue living a peaceful existence on Earth.

Good Omens sets up this conflict with plenty of comedic moments (and an incredible assortment of wigs worn by Tennant and Sheen). Crowley cosplays as a demonic version of Mary Poppins to keep an eye on the son of Satan, while Aziraphale dresses up as a gardener and magician. As the series progresses, it introduces several other characters who play key roles in saving the world: Anathema Device (Adria Arjona), a witch who uses prophecies to see what’s coming; Newton Pulsifer (Jack Whitehall), a man who gets recruited by witch hunter Shadwell (Michael McKean); and Madame Tracy (Miranda Richardson), a medium. Then there’s the Antichrist himself, 11-year-old Adam Young (Sam Taylor Buck), who must decide how he wants to use his powers.

The series shows key moments from the Bible—Adam and Eve eating the forbidden fruit in the Garden of Eden, Jesus being nailed to a cross—but it never feels overtly religious. Good Omens creates a world that feels familiar but not entirely real. The set design is lush and colorful, and both heaven and hell feature great villains, including Jon Hamm as Gabriel. Gaiman, who served as both a writer and showrunner on the series, does an excellent job of meticulously shaping a world he created for TV. One scene even shows a security guard reading Gaiman’s novel American Gods.

Big-budget fantasy series are not always suitable for children, but it seems like Gaiman wanted Good Omens to appeal to a wide variety of ages. Besides the language, violence, and a tame sex scene, the comedic series doesn’t contain anything that would be too traumatic for children and teens. The subplot with Adam Young and his friends would also appeal to younger viewers. The Crowley/Aziraphale relationship, however, will probably win over everyone. Good Omens won’t make you root for heaven or hell, but it will make you want to see both Tennant and Sheen in more roles, preferably together.