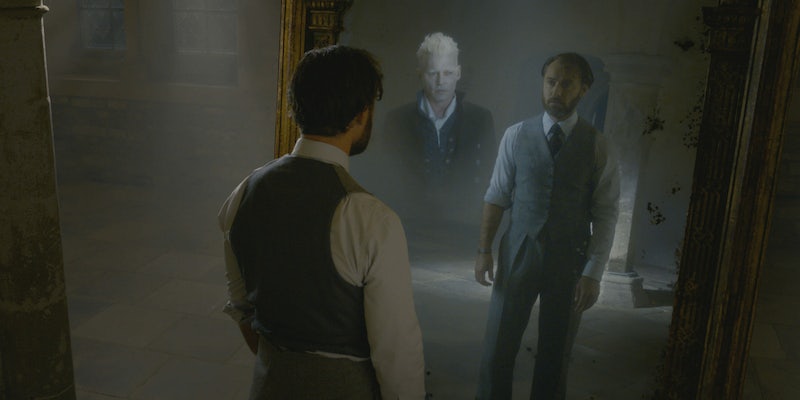 Warning: This post includes spoilers for Fantastic Beasts: The Crimes of Grindelwald.

The entire Fantastic Beasts franchise hinges on a conflict between two wizards: Albus Dumbledore and the wizard-supremacist villain Gellert Grindelwald. Divided by politics and morality, they still have much in common. Both are tremendously powerful and feared by their enemies; both have a penchant for manipulating their young followers. And while the movies haven’t acknowledged it yet, they used to be lovers—or at the very least, Dumbledore was in love with Grindelwald.

On paper, it’s a compelling relationship. Unfortunately, the first two movies have done a poor job of exploring it. The Crimes of Grindelwald sees Dumbledore and Grindelwald use Newt Scamander and Credence Barebone for a kind of long-distance proxy war, but Grindelwald’s characterization is thin and the movie avoids admitting what their relationship actually is.

Then there’s the matter of Johnny Depp, whose domestic violence allegations and reported unprofessional behavior hang over the film like a bad smell. Knowing how many Harry Potter fans actively object to his presence, Warner Bros. tried to downplay Depp’s role during the press tour. But Grindelwald’s name is in the title, and he has a lot of screentime. Depp is unavoidable, giving a forgettable performance as a villain who should be spine-chillingly disturbing. He’s meant to be a wizard Hitler, the international precursor to Voldemort, yet The Crimes of Grindelwald offers a shallow glimpse of his appeal as a leader. His appeal to Dumbledore is even more puzzling, partly because Rowling insists on revealing things at a glacial pace.

The Crimes of Grindelwald is a far cry from the carefully plotted mysteries of the Harry Potter books, telling an overstuffed story whose final twist has no emotional impact. It’s a microcosm of Rowling’s attitude to the Fantastic Beasts franchise as a whole: determined to withhold information as long as possible. Film one felt like a prologue, and film two feels like a prequel to whatever happens in film three: another long wait for more things to happen later. That includes Dumbledore and Grindelwald’s relationship, which Dumbledore euphemistically describes as “closer than brothers.”

Rowling revealed years ago that Dumbledore is gay, but the films still haven’t made this official. While the straight characters’ love lives are front and center, Dumbledore and Grindelwald’s relationship is intentionally ambiguous. In other words, precisely what many fans feared. Dumbledore could be a groundbreaking example of queer representation in a family blockbuster, but Warner Bros. seems too cowardly to seal the deal. He and Grindelwald are as subtextual as Holmes and Watson. In one flashback, they clasp hands during a blood pact (a moment that director David Yates ludicrously described as “very sensual”), but that’s it. The most interesting aspect is the pact itself, but even that gets watered down.

We know from the start that Dumbledore and Grindelwald can’t face each other in person. They recruit Credence and Newt to do their dirty work, and Dumbledore explicitly says he can’t fight Grindelwald himself. At first, we assume it’s because the emotional wound is too raw, but we later discover it’s because they made a magical vow. This blood magic resides in an amulet worn by Grindelwald, preventing them from harming each other. Narratively speaking, this transforms a compelling emotional conflict into a McGuffin—a physical plot device like a Horcrux or the Elder Wand. Instead of confronting his past, Dumbledore just has to break a magical necklace. By sidestepping the reality of his relationship with Grindelwald, the story becomes less interesting.

Two movies in, you have to wonder if Rowling bit off more than she can chew. The political worldbuilding is milquetoast compared to Harry Potter, and the films carefully avoid the contentious topic of Dumbledore’s sexuality. Admittedly, this situation is more complicated than including a gay character in the next Avengers movie. A doomed romance between a hero and a fascist supervillain is already a hard sell, but Rowling created this problem for herself.

Dumbledore’s love life isn’t just an issue of representation—it’s a central driving force of the plot. These films can’t live up to their potential until they face up to what really ties Dumbledore and Grindelwald together.