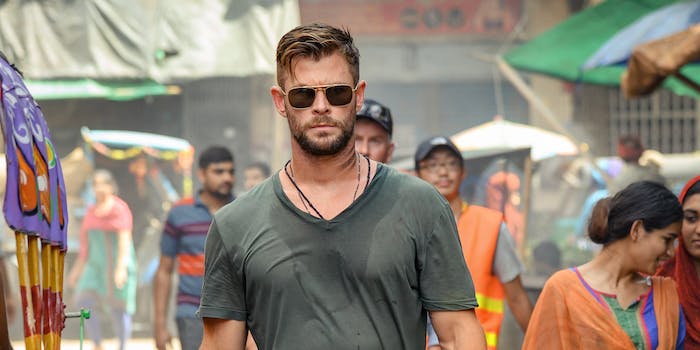 Netflix is notoriously cagey about releasing viewing data, routinely canceling and renewing shows without revealing how many people are watching them. On the occasions when the platform does share some info, it’s generally to celebrate the popularity of an original title. Go figure!

The latest update is a top ten list of Netflix’s biggest original movies, published in Bloomberg. Chris Hemsworth’s action movie Extraction is at number one, with 99 million views in four weeks.

As always, we must take the idea of a “view” with a pinch of salt. Netflix updated the company’s internal definition of a “view” this year, categorizing it as whenever a subscriber watched something for more than two minutes. This is apparently long enough to “indicate the choice was intentional.”

Given the fact that high-profile Netflix originals like Extraction are often heavily promoted on the front page with autoplay trailers, it’s not hard to imagine 99 million people tuning in for two minutes. Whether they watched to the end of the movie is another question entirely.

But, Netflix’s top ten list suggests that the platform’s blockbuster strategy is paying off: hiring A-list actors to star in Netflix-branded versions of commercially successful genres.

Just like with traditional movies and TV, the hottest titles on Netflix follow familiar formulas that audiences can enjoy without investing a ton of mental energy after a stressful day at work.

Netflix’s more serious, Oscar-contender dramas (Roma, Marriage Story, The Two Popes) don’t tend to be as popular as their streaming-friendly blockbusters—which, once again, reflects the same trends we see in cinematic releases.

This all points toward a scenario where Netflix releases more Adam Sandler-style comedies and star-studded action flicks like The Old Guard, with a few mainstream horror films thrown in. However it would still be interesting to see how many people are actually watching these films to the end, as opposed to clicking on Chris Hemsworth’s face and tuning out after five minutes.