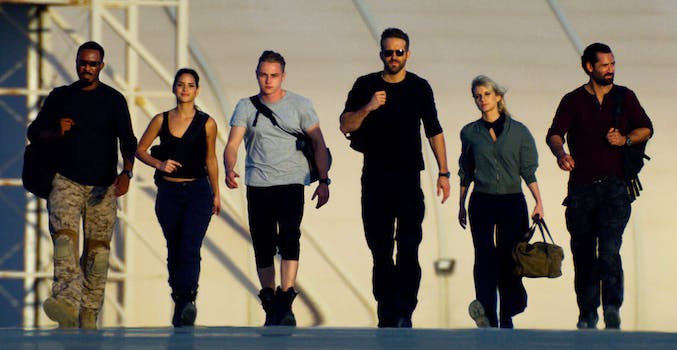 Even the star power can't save this film.

6 Underground kicks off with a roughly 15-minute car chase. Well, technically it starts with Ryan Reynolds as tech billionaire “One” (the titular team only calling one another by their numbers is a major plot point) flying around in a jet as he monologues about the “freedom” of being a “ghost.” He faked his own death, you see, and he put together a team of five other assorted outlaws and badasses who faked their deaths, too, so they could live off-the-grid (“underground,” if you will), spending the rest of their lives killing bad guys without the pesky families and friends from their previous lives getting in the way.

RELEASE DATE: 12/13/2019
DIRECTOR: Michael Bay
STREAMING: Netflix
Are you a Michael Bay fan? You’ll like this, assuming you could look past some troubling political implications. Everyone else need not apply.

But mostly, everything you need to know about 6 Underground can be gathered from that opening chase sequence. Ryan Reynolds (I’m not going to confuse readers by repeatedly referring to characters by their numbers), playing an irreverent, smartass alpha-male as per usual, took on an Italian mob boss in a brief flashback. Now he and his team, including spy Two (Mélanie Laurent), hitman Three (Manuel Garcia-Rulfo), master thief Four (Ben Hardy), doctor Five (Adria Arjona), and driver Six (Dave Franco), must make a daring escape through the streets of Florence with a seemingly infinite array of mobsters on their tail.

Reynolds, as the leader, rides shotgun and quips sarcastically. Laurent shoots people as the doctor patches up her gruesome gunshot wound. Garcia-Rulfo blows stuff up. Hardy (and surely his stuntman) does parkour from rooftop to rooftop, because apparently parkour is still a thing in 2019. And Franco gleefully burns rubber, though he’s distracted by beautiful Italian women. At one point, he hits a civilian, forcing the man to tumble over the car. Reynolds warns Franco about hitting more, suggesting that this is not the first such incident.

It’s played for laughs, and your reaction to that moment may determine whether you want to watch the rest of the movie. For some, it’s surely madcap, turn-your-brain-off fun, even more than a good number of Michael Bay films (one of my biggest problems with his Transformers films is that there isn’t *more* giant robot action, since I can’t bring myself to care about any of the human characters). For others, it’s a mean-spirited, exhausting exercise in “might makes right” worldview.

Those troubling political implications become more evident when the opening car chase finally ends. We’re introduced to new recruit Seven (Corey Hawkins, providing more pathos in his performance than this boneheaded film deserves), an ex-military sniper. He’s wracked with guilt, because when a suspicious truck approached his base, he wasn’t given clearance in time to shoot the terrorist, and all his brothers-in-arms were killed. Reynolds promises that if Hawkins joins his team, he’ll never tell him “not to pull the trigger.”

So they fake his suicide, join him in watching his own funeral (a scene that tries and fails to provide comic relief), and plan the mission that makes up the rest of the movie: staging a coup against Rovach Alimov (Lior Raz), the blandly brutal dictator of Turkmenistan, so they could replace him with his more liberal brother, the milquetoast Murat (Payman Maadi).

There’s also a joke about how Turkmenistan sounds similar to other Middle Eastern “stans” like Afghanistan. That’s the kind of commentary we’re dealing with here, folks.

6 Underground was written by Paul Wernick and Rhett Reese, best known for writing both of Ryan Reynolds’ Deadpool films. 6 Underground is more of a traditional action film than the quippy action/comedy of either Deadpool, but Wernick and Reese still try to give Reynolds plenty of funny moments, most of which fall flat. Reynolds still has his usual charms, but Bay has stumbled with attempts at humor since the ’90s (2013’s underrated Pain & Gain is an exception), and most of these jokes, like the rest of the script, feel lazily written.

The plot’s difficult to follow, and few characters have a clear motivation. Bite-sized pieces of backstory are peppered throughout, and lip-service is paid to character development, but the film seems more committed to fleshing everyone out in the inevitable sequel than it is to providing satisfying clarity and closure to the film we already have. That said, nobody here is interesting enough to care about their mysterious pasts anyway.

Sometimes 6 Underground’s boneheaded commitment to testosterone-fueled absurdity works in its favor. One of the most interesting scenes involves an invention by Tony Stark-esque wunderkind Reynolds that allows him to manipulate magnetism. Michael Bay isn’t always as deft at directing action scenes as his reputation as an action director might suggest, but his notoriously shaky camera isn’t as nauseating here, and he takes advantage of 6 Underground’s R-rating with some refreshingly visceral combat. And of course, there are explosions and slo-mo shots galore.

Yet it’s not as easy as it should be to enjoy all that, because 6 Underground is too adjacent to real-world concerns not to take it at least a little seriously. There’s a real conversation to be had about U.S. intervention in foreign governments, and how our media, including our most ridiculous action movies, may inform some harmful beliefs about foreign policy. Obviously I’m not remotely pro-dictator, but reducing even the cruelest authoritarian leaders to mustache-twirling action movie villains obfuscates serious conversations we should be having about this tumultuous moment in history we’re all experiencing right now in the real world.

That’s to say nothing of the glorification of a tech billionaire taking it upon himself to kill the people he’s decided need to be killed. I’m the biggest Batman fan you’re likely to meet, but there’s never been a story about Bruce Wayne flying the Justice League to North Korea on a mission to assassinate Kim Jong-Un.