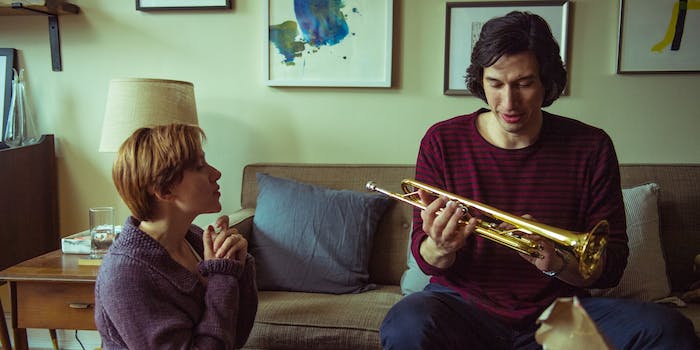 ‘Marriage Story’ excels at just about everything

The Netflix film by Noah Baumbach is both funny and heartbreaking.

In Marriage Story, writer/director Noah Baumbach takes a well-covered subject—a young couple on the brink of divorce—and turns it into a film that feels completely original. The couple in this story are Charlie and Nicole, played by Adam Driver and Scarlett Johansson, in performances that should easily net both of them Oscar nominations. It’s hard to take a side here, as the film portrays the couple as sympathetic characters who once loved each other but have since grown apart.

It’s clear from the advertisements and trailers, which highlight the two perspectives, that Marriage Story is not out to paint either character as the bad person. Baumbach, who spoke Friday on a panel after a screening of the film at New York Film Festival, said that his intention was to make a “love story in a different way.” The filmmaker also covered divorce in his 2005 film The Squid and the Whale, but Marriage Story focuses more on the couple and how their relationship evolved. “When something isn’t working, you see it in a more clear-eyed way,” said Baumbach. “In looking at divorce, I could explore marriage.”

Since the film follows two creative types—Charlie is a theater director, while Nicole is an actress—this is also a film about the difficulties of dating when both people are ambitious and trying to go down separate career paths. But you certainly don’t need to be involved in a creative industry to understand the dynamics of their relationship.

We’re introduced to the couple through a montage of scenes from their daily lives, along with voiceovers by both Charlie and Nicole describing the other person. These opening scenes are touching and intimate, yet devoid of schmaltz. After the creative introductions to both characters, we see the couple meeting with a mediator, and it’s clear that their marriage is ending. The mystery is how it fell apart. Baumbach slowly reveals this crucial element of the story. Nicole’s “how” is shown in an emotional scene with her lawyer, Nora (Laura Dern, in a role that feels tailor-made). In this monologue, we hear Nicole’s reasons for wanting to end the marriage, which all seem completely valid: She felt that her needs and ideas were not valued. “He didn’t see me as something separate from himself,” Nicole says.

Charlie also has difficult conversations with divorce lawyers Jay (Ray Liotta) and Bert (Alan Alda). But since Nicole was the one who started the divorce process, several of his conversations revolve around trying to be prepared for Nicole’s demands and custody arrangements for their young son Henry (Azhy Robertson). While neither person is painted as the villain, both Nicole and Charlie become wrapped up in “winning” and trying to make the other one look like a bad parent. We see how easy it is for a couple to reach this point, even if they never imagined that they would become that couple.

For a film about a couple ending their relationship, Marriage Story is surprisingly funny. There are many laugh-out-loud moments that arise from the strong supporting cast—which includes Merritt Wever, Wallace Shawn, and Julie Hagerty. And, since the film is set in both Los Angeles and New York, there is a repeating joke about how the former has more “space.” The film is bookended by Halloween over different years, which also adds some humorous commentary on trick-or-treating in L.A. and gifts us with the image of Driver dressed as the Invisible Man. Marriage Story develops both Charlie and Nicole so well that it’s hard not to feel shaken up after watching it. You experience the divorce with them, and all the emotions that go along with it; anger, fear, sadness, pity. But, through it all, there’s love.