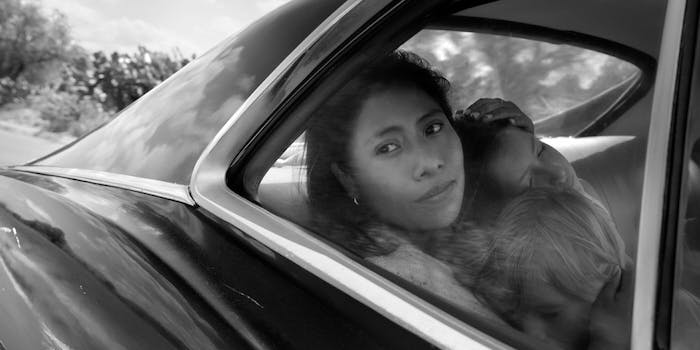 The autobiographical drama is one of the best films of 2018.

Inspired by the life of his childhood nanny, Roma is Alfonso Cuarón’s most personal movie to date. Filmed in black and white, with actors speaking Spanish and Mixtec, it’s another bold move from a director whose career spans everything from intimate dramas (Y Tu Mamá También) to children’s movies (Harry Potter and the Prisoner of Azkaban) to sci-fi blockbusters (Gravity).

Roma draws heavily from Cuarón’s upbringing in 1970s Mexico City, focusing on a young housemaid and nanny played by first-time actress Yalitza Aparicio. Cleo is warm and loving, working in the house of a wealthy family whose parents’ marriage is on the rocks. She’s part of the household but not quite part of the family—a beloved figure to the children, but regularly reminded of her place by their mother, Sofia (Marina de Tavira). It’s the kind of viewpoint one rarely sees from a male filmmaker: a subtle and intimate exploration of women’s everyday lives, told with a thoughtful eye for race and class dynamics.

We typically use the word “immersive” to describe big movies with plenty of special effects—which, in fact, covers much of Cuarón’s recent work. Gravity is about as far as you can get from an autobiographical drama, but echoes of Children of Men appear in Roma. Cuarón’s 2006 dystopian thriller is famed for its long single-shot sequences, including an extensive scene following Clive Owen through a chaotic street battle. Roma may be a $15 million indie film, but it has that same sense of immersion. The camera weaves through bustling urban scenes and family parties and hovers unobtrusively in Cleo’s home with virtually no close-ups. There’s no musical score at all, leaving viewers to focus their attention on the background sounds of the house and the street outside, which build to a tumult during crowd scenes.

The setting feels so real that it’s almost like entering a memory, and I was astounded to learn that many of the key locations were built from scratch. Cuarón recreated a version of his childhood home, sourcing vintage furniture and describing the smell of each room to set designer Eugenio Caballero (Pan’s Labyrinth). More impressively, they rebuilt an entire street for some of the outdoor crowd scenes, creating an environment with documentary-level realism.

Of course, this is all iceberg work, hiding beneath the surface of a decidedly un-flashy film. Roma unfolds in your brain over a matter of days, as details begin to percolate through the initial reaction to a beautiful, funny, emotionally intense experience. Viewers don’t need to know the technical labor behind the end result, but ultimately it makes the film even more fascinating. Cuarón went to tremendous lengths to deliver a feeling of authenticity, rejecting soft-focus nostalgia in favor of meticulous detail—all for a memory that is not actually his own. The setting draws from his childhood, but viewers see everything from Cleo’s young adult perspective, showcasing an immense work of empathy for Cuarón’s real-life nanny, Libo.

Cuarón invites viewers into his world, reexamining his childhood with the wisdom (and political insight) of middle age. The characters’ cultural backgrounds shape their lives, as Cuarón acknowledges the sheltered nature of his own white, wealthy upbringing. As a rural Mixtec girl who moved to the city to work as a maid, Cleo has a much different experience. And since this all takes place in 1971, viewers witness the build-up to the Corpus Christi Massacre of student activists, a backdrop of political upheaval that the main characters barely notice until it invades their everyday lives.

Like Ava DuVernay’s documentary 13th, Netflix will bring Roma to a much wider audience than a typical arthouse release. But if you have the opportunity, it’s best viewed in a theater. Roma deserves to be seen on a big screen, in a dark room, with a switched-off cellphone. Netflix, belatedly, seems to understand. Reacting to glowing film festival reviews, the streaming giant decided to give Roma a theatrical release, with screenings beginning before it arrives online.

In other words, Netflix realized Roma has staying power, and it wisely invested beyond the usual method of leaving new releases to sink or swim in the vagaries of the algorithm. It’s undoubtedly one of the greatest movies of 2018, destined to live on as a highlight of Cuarón’s career.

Roma arrives on Netflix and general release on Dec. 14, with screenings in select theaters from Nov. 21.