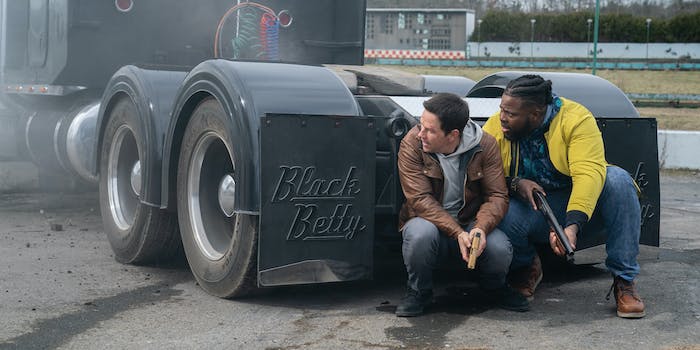 The new action-comedy is, above all else, an exercise in machismo.

Spenser Confidential, the new action-comedy from Peter Berg, begins with Mark Wahlberg’s Spenser, a Boston cop, recounting the details of his assault of Police Captain John Boylan (Michael Gaston) to a judge. Although he claims that he suspected Boylan of covering up evidence in a murder investigation, he admits that he knew that he was behaving outside the law and against the Boston Police’s code of conduct, and has therefore chosen to plead guilty—but, he adds, before music kicks in triumphantly over the film’s title card, “The son of a bitch deserved it.”

RELEASE DATE: March 6, 2020
DIRECTOR: Peter Berg
STREAMING: Netflix
Mark Wahlberg stars as a former cop who roots out corruption in the Boston Police in this anemic action-comedy from Peter Berg.

On the same day that Spenser is released from prison, five years later, Boylan is murdered, and the police quickly pin his killing on another cop whose body is found the next morning, despite his widow’s protests. Spenser, who was at home with his mentor Henry (Alan Arkin) at the time, steps in where the police will not and sets out on a quest to find the son of a bitch responsible on behalf of the widow. Over the course of the film, he appeals to and then dismisses one ineffectual institution after another: the cops are crooked, the FBI unconcerned, journalism afraid. Spenser himself is the only reliable moral authority in the land. Even his unhinged ex-girlfriend praises him for his strong moral code—a moral code that, apparently, includes cheerfully resorting to torture when the FBI won’t lend him a hand.

Spenser Confidential is the fifth film Wahlberg has made with Berg in seven years, and the first either has made for Netflix. Though more ink has been spilled in the media about the films Netflix has campaigned for Academy Awards, including Roma and The Irishman, the company has made a concerted effort to recruit A-list movie stars for original, direct-to-streaming projects with more mainstream appeal (most notably, Adam Sandler). Wahlberg, who has become one of Hollywood’s most reliable (and highest-earning) leading men in the past decade, is an obvious candidate for this project, and from a business perspective, this film is an undeniable coup. From an artistic perspective, unfortunately, it is an abysmal failure—which probably won’t stop Netflix from making a sequel.

It is easy, and perhaps justifiable, to dismiss Wahlberg as a two-dimensional star of banal action movies (and the occasional comedy). The last good, serious film he starred in—and produced—was The Fighter, in 2010, David O. Russell’s biopic of Boston-area boxer Micky Ward. But before he graduated to action stardom, Wahlberg made a name for himself playing character parts in films by respected auteurs: After his breakout role as porn star Dirk Diggler in Paul Thomas Anderson’s Boogie Nights (1997), he starred in multiple films by James Gray and Russell, including I Heart Huckabees (2004). He was nominated for an Academy Award for his small but ferocious role in Martin Scorsese’s The Departed (2006) as Sean Dignam, a sergeant working in the undercover division of the Massachusetts State Police’s Special Investigations Unit.

In nearly all these successful roles, Wahlberg plays characters who are, for one reason or another, deeply insecure and discontented. When Dirk Diggler’s abusive mother destroys his room and tells him he’s stupid at the beginning of Boogie Nights, Dirk sobs and tells her, “I’m not stupid … please, please don’t be mean to me,” before fleeing to find love elsewhere. Dignam, in The Departed, is whip-smart but incapable of holding a conversation without insulting his interlocutors. And in Russell’s I Heart Huckabees, his character, a firefighter obsessed with the evils of petroleum, finds himself in the midst of a (literal) existential crisis. As he patiently explains, “If this world is temporary, identity is an illusion, then everything is meaningless … and that’s got me very confused!”

These existentially challenged characters could not be farther from the macho leading roles to which Wahlberg has graduated. It is dangerous to read too much into an actor’s biography to interpret their career path, but in Wahlberg’s case, some context is useful. He became addicted to drugs as a young teenager and was arrested and jailed for violently attacking and shouting racist slurs at two Vietnamese men, for which he has since apologized; he is now a devout Roman Catholic. As he has grown increasingly famous and successful, his work has shifted away from the messier and more emotionally searching work that he did in several excellent films in the 1990s and 2000s and contracted into a conservative template in which he is, almost always, the reassuring hero who can be trusted to get the job done. Regrettably, those roles also drain him of everything that makes him interesting as an actor.

Like many Wahlberg protagonists, Spenser has a chip on his shoulder, but whatever insecurities he nominally possesses as a result of serving time and losing his job on the force are quickly swept away by his righteous moral certitude that something is amiss in the Boston PD, and only he can set things right. Spenser Confidential is not designed to make viewers think, but merely to entertain them, which wouldn’t be a crime if it weren’t so terminally dull. Wahlberg and Berg clearly enjoy working together, but Berg, primarily a director of action-thrillers, is a poor fit for this action-comedy. His direction, which can be kinetic at its best, is muddy and uninspired here, and though Wahlberg can be very funny when he wants to be, as Spenser he’s flat and self-serious.

The film is, above all else, an exercise in machismo. Over the course of the movie, Spenser coaches his new roommate and investigatory partner Hawk (Winston Duke) in MMA fighting, implausibly fights off more than one large group of enormously fit men on his own, and chides the man responsible for masterminding the corrupt scheme to “Do your time like a man, like I did.” The film’s Boston setting is an essential component of this fantasy. The real, complex politics of Boston—which include a long history of racism towards its African American residents, often by members of the police force—are not addressed here, although the film does feature several Black characters; instead, the film depicts a fantasy of the city rooted in a romanticized view of its working-class, Irish American population.

Midway through the film, Spenser dismissively describes a gangster as an “Irish mob throwback. Back when the Irish mob existed outside all those shitty movies.” This line might be intended as a self-referential joke, but it isn’t played for laughs, and the focus of the film is police corruption, not the mob. The Departed, which revolved around the intersection of the Irish mob and police corruption in Boston, and in which Wahlberg starred, marked the beginning of Boston’s movie boom. It remains one of, if not the, best films ever made about the city. Though the Boston of The Departed—a heightened, melodramatic mob movie—is not “real,” it evokes the taste and smell of the city with startling intensity, and it deeply understands the city’s Irish American population. Class tensions simmer between lower- and upper-class Irish Americans and the Catholic Church is omnipresent. The mobsters and cops alike affect a vulgar machismo that Leonardo DiCaprio’s undercover protagonist labors, with increasing exhaustion, to persuasively mimic.

None of this granular detail or critique of masculinity can be found in Spenser Confidential. Though Wahlberg played the most vulgar, furious cop in The Departed, his public persona has become synonymous with the romanticized fantasy of Boston’s Irish Americans in which this film traffics. The Boston of Spenser Confidential is not the city itself but instead a curated set of embarrassingly obvious signifiers: a Dunkin Donuts bag, a shot of the Leonard P. Zakim Bunker Hill Memorial Bridge, location titles that read “SOUTHIE” and “LOBSTAH,” and—most groan-worthy of all—shots of a crowd at Fenway singing “Sweet Caroline.”

These symbols have become a quaint shorthand for an imagined city dominated by a white working class—a phenomenon largely a thing of the past in America, including in Boston. This imaginary setting is appropriate for the imaginary vision of justice that Spenser enacts. Though the Boston PD is rife with corruption, the film retains a sense of reverence for the police. It is Spenser’s training as an officer, after all, that has prepared him to investigate this cover-up, and he does so largely to clear the name of a “good” cop who has been framed. When he finally catches the man responsible for the chaos, Spenser asks him, “Cops killing cops? When did that ever become okay?” As the film ends, Spenser sees a news spot on television suggesting another frame-up of a “good” cop, which he’ll presumably investigate in the sequel. Spenser, now, is the police—but a freer version of the police, one that doesn’t have to worry about the law, and can beat up all the sons of bitches who deserve it.

Update: This article was corrected to reflect the name of the bridge seen in the film. It’s the Leonard P. Zakim Bunker Hill Memorial Bridge.