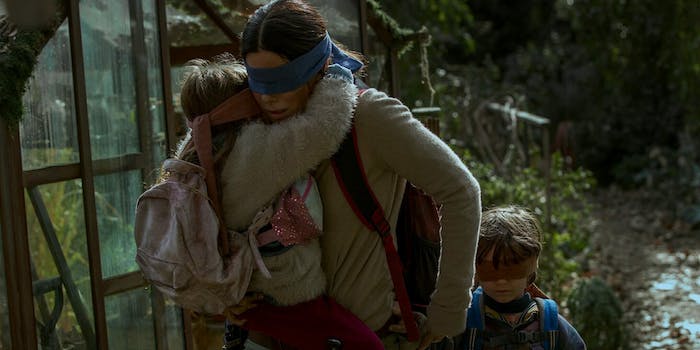 This post-apocalyptic Sandra Bullock thriller sadly pales in comparison to 'A Quiet Place.'

Netflix’s Bird Box invites obvious comparisons to the survival horror hit A Quiet Place, although those comparisons are not especially flattering. Both are post-apocalyptic thrillers about parents shielding their kids from an unseen foe, and both focus on one of the five senses. A Quiet Place had aliens who hunt by sound, forcing the main characters to live in silence, while the monsters of Bird Box are only dangerous if you look at them. People in Bird Box spend a lot of time blindfolded and waving weapons at invisible enemies, but unlike A Quiet Place, the film doesn’t do anything interesting with its central conceit.

Sandra Bullock stars as Malorie, a single mother of two 5-year-olds. We see her at two points in her life: heavily pregnant when the apocalypse hits, and on the run with her children five years later, embarking on a perilous voyage to a safe haven. Her chilly parenting style is refreshingly different from A Quiet Place’s almost propagandistic depiction of an idyllic nuclear family, but Bird Box makes the mistake of using the kids as props.

Oddly docile and obedient, Malorie’s children don’t have personalities or distinctive relationships with their mother. An unfortunate reminder that helpless kids are a useful tool for lazy horror filmmakers, because audiences can’t help but worry about their safety. Sure, it works, but it feels pretty cheap. Bird Box portrays parenthood less like a two-way relationship and more like a quest where Malorie must protect a pair of portable mannequins. The kids only have meaningful screentime when they’re in danger; a far cry from the well-characterized children of A Quiet Place or The Haunting of Hill House. So despite a predictably strong performance from Bullock, the emotional manipulation is too obvious. The same goes for the mid-apocalypse flashbacks, which rely heavily on gory shock value.

Adapted by writer Eric Heisserer (Arrival) and director Susanne Bier (The Night Manager) from a novel by Josh Malerman, Bird Box opens with a spate of gruesome mass suicides. Joining a house full of survivors—your typical apocalyptic movie cast of bickering strangers, including John Malkovich and Moonlight star Trevante Rhodes—Malorie gradually learns what happened. Some kind of demonic entity has invaded Earth, driving people to seek a violent death if they see it for even a second.

The survivors adopt methods of staying alive without opening their eyes outdoors, until (of course) something forces Malorie to go on the run with her two kids. Along the way, they’re hampered by a dubious twist that I’d count as a minor spoiler, so don’t read the next sentence if you care about that kind of thing. Tying into the suicidal violence of the main conceit, we learn that “criminally insane” people are immune to the monster’s powers, and want to expose other survivors and force them to kill themselves. What a sensitive depiction of mental illness!

Most apocalyptic thrillers rely on the same collection of tropes, so their success lies in the execution. Sometimes you see smart, inventive examples like The Girl With All The Gifts or 28 Days Later, and sometimes it’s just another movie about people fleeing danger and looking implausibly attractive in a world without hot running water.

Bird Box is better than Netflix’s recent apocalypse movie Extinction (also co-written by Eric Heisserer), but in a year with so many excellent horror films, it doesn’t have much to offer. Compared to the surging adrenaline and neat worldbuilding of A Quiet Place, it feels both manipulative and unimaginative. The thrills are effective enough and the cast props up a formulaic narrative, but you can see why it wound up on Netflix instead of getting a big cinematic release.