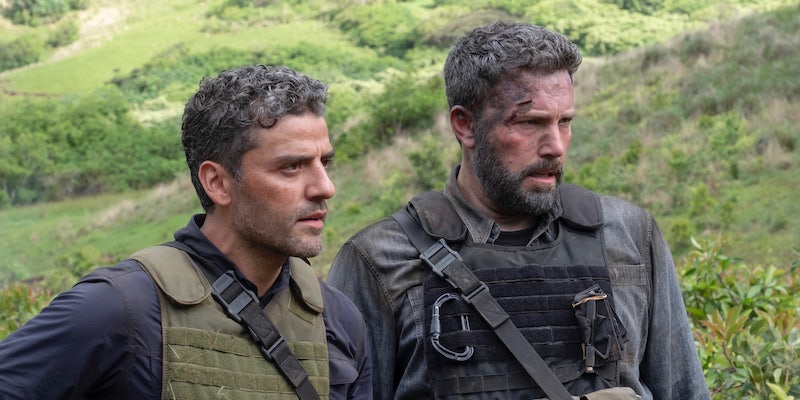 ‘Triple Frontier’ takes on a big heist but falls short

The cast can't save the movie from itself.

With its all-star cast taking on a high-stakes heist, Triple Frontier packs a lot of power. But the film suffers from paper-thin characterization and fizzles in its execution, leaving you hanging as some of its more interesting aspects go untapped.

The five men at the center of Triple Frontier already had blood on their hands during their time in the military, but they did it for their country. As they get older, they see firsthand just how little the military cares for its own once they’ve given the best years of their lives. Redfly (Ben Affleck) is divorced and unable to sell condos. Pope (Oscar Isaac) works with law enforcement in other countries to take down the corrupt. Catfish (Pedro Pascal) is a pilot whose license gets suspended after he’s busted for cocaine. Ironhead (Charlie Hunnam) gives motivational speeches to younger soldiers to convince them to stay in the military, while his brother Ben (Garrett Hedlund) is a cage fighter.

They’re all, in their own way, in dire straits. Their pension isn’t enough to care for their families, their bodies are falling apart from years of toil (surgery didn’t help), and they’ve all gotten the sense that the government for which they chose to fight isn’t going to take care of them. So when Santiago tries to recruit them for One Last Job, they’re hesitant but intrigued.

The payout is a guaranteed $17,000 apiece for a week of work, but it could be much more if they help take down a notorious, rich drug lord in South America. It’s clear this heist money would massively help all of them, and they might not be so desperate if the country they served took better care of them. But any motivation they had—which is flimsy at best—gets thrown aside the minute the money comes into play.

The main actors in Triple Frontier make do with what they’re given, although Affleck and Isaac, as the leader and mastermind of the operation, get much more to work with. Together, they instantly click and make much of the film more watchable.

Once the heist begins in earnest, the men start to butt heads. The script takes shortcuts to build the mistrust as everything starts to go wrong; money makes monsters of us all. At one point, Pope jokes that Redfly can buy his daughter’s way into Harvard with all of the money he’s getting from the heist, an unplanned but incredibly timely joke if there ever was one.

Triple Frontier has longer shots of money falling, being passed around, and burning than it does any kind of development for several of its characters. Yovanna (Adria Arjona)—one of a handful of female characters in the film to have a speaking role, and the person on the inside who gives intel to Pope—is addressed as the informant more than by her name. Another female character appears for one scene almost solely to give insight on a male character. There’s much more telling than showing here.

It doesn’t take long for the men to throw out any kind of common sense and morals they held before the job. The film’s uneven pace takes some getting used to: It’s too slow up until the big moment, but then new developments appear so quickly you barely have time to process what just happened. Triple Frontier never quite recaptures the suspense of the heist itself, which isn’t great when you still have half a film left to watch.

Amid the personality clashes also lies a muddied message about toxic masculinity. The characters could all use the money—one of the five men dreams about the Ferrari he’ll buy with his share—but it’s not enough to get a guaranteed share with a group takedown. Redfly in particular seems to harbor an internalized sense of failure for not being able to provide for his family. The men have got to take all the money themselves, and they cling to it as long as humanly possible even though it puts them directly in harm’s way. (With their egos running the show, how else could it have gone?) But the moments in which the film actually wrestles with this are brief, never leaving you with a clear indication of where it stands.

If you don’t dig far below the surface, Triple Frontier is a jam-packed heist film with a great cast and some incredible visuals. But once you begin to think about it, the film reveals about as many holes as the central heist itself.