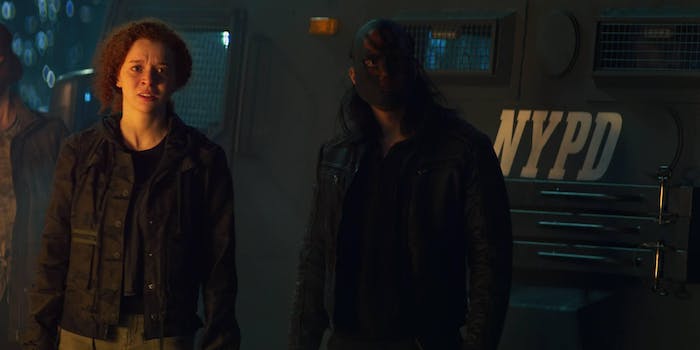 ‘The Falcon and the Winter Soldier’ delivers a muddled, overstuffed finale

Sam Wilson gets a satisfying conclusion in an otherwise chaotic episode.

Unlike the typical superhero finale of defeating evil in an epic battle, The Falcon and the Winter Soldier offers us a different but equally attractive fantasy: Sam Wilson solves a complicated systemic problem by delivering an inspiring speech to some heartless politicians. If only that worked in real life! Although yes, we do also get a lengthy battle sequence as well.

While WandaVision started out strong and culminated in a rather lackluster finale (not a story that should’ve ended with a CGI fight scene), The Falcon and the Winter Soldier really found its feet in episode 5. Unfortunately this left us with only one episode to wrap things up, and the finale was predictably uneven. On the one hand, we got some interesting elements like Sharon Carter’s heel-turn as the Power Broker (a very appropriate twist for a former CIA agent/current crime boss), the warm friendship between Sam and Bucky, and the simple thrill of watching Sam don the Captain America costume and fling his shield around. On the other hand, there’s no escaping the show’s clumsy politics. And the finale really emphasized the overstuffed cast of supporting characters and clashing subplots.

It would’ve been much cleaner to dedicate the whole show to Sam’s journey vs. John Walker’s role as Bad Captain America. But the inclusion of the Flag-Smashers and Zemo meant far too many strands had to be wrapped up at once—including another scene with Isaiah Bradley, a happy ending with Sam’s family, and the over-arching problem of the post-Blip refugees. The show never explained this refugee crisis in a satisfying way, and the Flag-Smashers’ goals were frustratingly nonspecific. We know they’re meant to be sympathetic antagonists, but we’re offered virtually no background for their ideology or motives. So when Karli Morgenthau starts ordering her followers to kill hostages at a Global Repatriation Council summit, this final conflict feels kind of unearned.

During an extended battle sequence (where we must suspend our disbelief about Bucky failing to use a gun), Sharon kills Karli and Zemo assassinates the other prominent Flag-Smashers. A narratively convenient ending that allows Sam to mourn Karli and share her message in a more “peaceful” manner to the politicians and TV cameras outside. So while Sam is supposedly working outside the system, he still believes that the system can be changed from within. Leveraging his symbolic power as Captain America, he highlights Karli’s humanitarian goals while arguing that more terrorists will emerge if the GRC fails to help post-Blip refugees. The GRC eventually cedes to a combination of Sam’s rhetoric and Karli’s tactics.

When Sam goes public as the new Captain America, the show heavily emphasizes his power to represent and inspire. Moreso than other Marvel heroes, Captain America is meant to be a symbolic figure. But the way this happens feels pretty weird alongside Isaiah Bradley’s grim backstory.

After speaking with Bradley about the horrific racism he faced at the hands of the U.S. government, Sam’s immediate reaction is to don a stars-and-stripes uniform, work with law enforcement to defend a government building, and deliver a moral lecture to a white politician. These choices are endorsed by the narrative, culminating in Sam proudly unveiling an Isaiah Bradley statue at the Smithsonian. There’s an underlying suggestion here that Bradley’s suffering belongs to the past. Meanwhile, this episode features a jarringly heroic role for the NYPD. At one point, a squad of armed cops literally show up to save the day, arresting the Flag-Smashers thanks to a call from Bucky. So in order to appreciate Marvel’s anti-racist commentary, we must ignore the show’s large-scale support of law enforcement. The final battle uncritically includes dozens of cops who act as backup for Sam and Bucky, tacitly implying that the racist police in episode 2 were outliers.

Over the past six weeks of covering The Falcon and the Winter Soldier, much of my criticism has focused on the show’s incoherent politics. But as I said after episode 5, we don’t really expect airtight political writing from a Disney/Marvel product. Audiences are perfectly capable of enjoying the good points and ignoring the bad. The Falcon and the Winter Soldier‘s real problem is clumsy and uneven writing overall, making poor use of the time we’re given.

If we accept the common industry parlance of big-budget miniseries as “six-hour movies” (side note: they are not), then The Falcon and the Winter Soldier pales in comparison to the normal-length movie Captain America: The Winter Soldier. Despite including some more hard-hitting ideas like the Isaiah Bradley storyline, this show does less with its two main characters. In CA:TWS, Steve Rogers receives a more cohesive emotional and moral journey than Sam does here. The same goes for Bucky, whose Falcon and the Winter Soldier role relies on leftover audience engagement from earlier films. For a six-hour show that combines heavy themes with high-octane Marvel fun, Sam and Bucky’s character development was surprisingly shallow. And I think the audience reactions reflect that lack of depth.

Many of the show’s most popular moments are analogous to the shawarma scene in The Avengers: moments where we engage with the characters on a low-stakes personal level. Things like the Zemo dance scene, the Wilson family boat, Bucky’s love life, or the banter between Bucky and Sam. Serialized comics offer this material alongside more complex storylines, which is why fans stay invested for years on end. Marvel’s Disney+ shows should clearly do the same, balancing deeper storytelling with more intimate character moments. But in the end, The Falcon and the Winter Soldier was unable to focus on either.