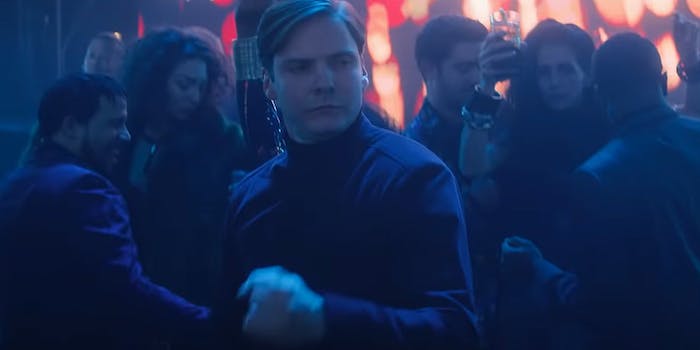 Marvel gave us an extended cut of his dance moves.

People appreciate a good dance move, but in the case of Falcon and the Winter Soldier, it’s the utter awkwardness of Baron Zemo (Daniel Brühl) dancing at a club in Madripoor in “Power Broker” that made the Marvel villain-turned-antagonist into a meme superstar. But nearly a week after Zemo’s dance moves spread far and wide, Marvel gave fans what they really wanted: more dancing Zemo.

When the seconds-long clip of Zemo dancing first debuted, it didn’t take long for people to latch onto Zemo’s utter relatability even though he’s incredibly wealthy, technically a royal, someone who killed a Wakandan king and tried to frame Bucky Barnes (Sebastian Stan) for it, and puppeteered the Avengers’ falling out.

And of course, in the episode’s wake, @zemodancingto, which does exactly as its username advertises, emerged to gift us the mashup of Zemo dancing to any song.

“[That moment] was improvised when I saw the crowd dancing, going loco,” Brühl explained. “I felt the beat and was like, Zemo has been sitting in a dodgy German prison cell for years. So, he needs to let off some steam and show his moves. Let’s go for it! I enjoyed so much the reaction of Anthony [Mackie] and Sebastian [Stan] looking at me. Still, I was 100 percent sure that they would cut it out [of the show]. I was really surprised and happy that they kept it. It was a long dance. There’s more to it, but they cut this little moment.”

There’s a logical explanation as to why we didn’t get to see more footage in the show. It’s a matter of editing, and even the brief shot we see before Sharon Carter comes in to drive the episode’s John Wick-esque plot further already stands out. But the revelation that there was more footage of Brühl’s dance moves led to fans calling to see what they dubbed the “Zemo Cut.”

People lost their minds, especially when they learned that Marvel also posted a one-hour edit of Zemo dancing on YouTube. And some took to comparing Marvel’s speed in delivering the “Zemo Cut” to how long Warner Bros. took to releasing the Snyder Cut.

While you can see why people are comparing Disney+’s delivery of footage fans asked for to Warner Bros.’ version of that, it doesn’t work far beyond a surface level. Zack Snyder’s Justice League involved some reshoots, getting a new score, and a $70-million budget—which included new visual effects—to put it all together. In the case of Falcon and the Winter Soldier, the assembly was likely far simpler. The crew had to find the footage of Brühl’s dance moves among everything that was shot from Falcon and the Winter Soldier and edit it together if it wasn’t already edited that way; for the hour-long cut, someone had to then stitch it together.

If anything, Marvel releasing the Zemo Cut is far closer to its reaction to “Agatha All Along,” Agatha Harkness’ new theme song, after it debuted on WandaVision. People clamored onto it, played the scene on repeat, and ripped the audio to loop it into TikToks, and in response, Marvel released the soundtrack for episode 7 a full three days before it was scheduled to debut on streaming platforms. And once it did, “Agatha All Along” climbed to the top of the iTunes charts.

Fittingly, there was also an edit of Zemo dancing to “Agatha All Along.”

Doing something like that, or uploading the “Zemo Cut” is a win-win. Marvel and Disney+ get praised and it got people to be vocally excited for Falcon and the Winter Soldier ahead of the new episode. And given the far more mixed reception to Falcon and the Winter Soldier compared to WandaVision, it really works in Marvel and Disney+’s favor to occasionally throw fans a bone.