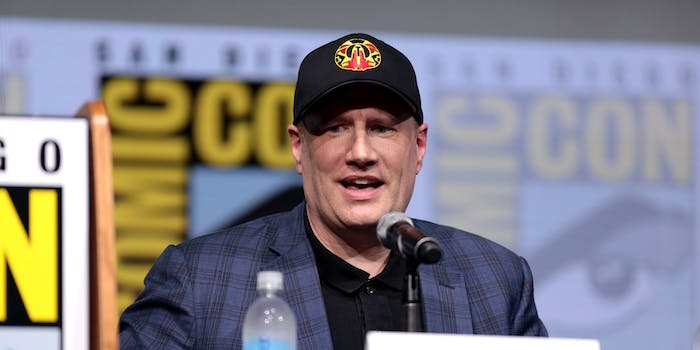 MCU producer Kevin Feige attracted a lot of mockery from film buffs this week thanks to an interview about director Chloé Zhao’s work on Eternals.

Speaking to Variety, Feige seemed shocked by the the impact of Zhao filming scenes on location instead of relying on CGI. In other words, he was dazzled by a ubiquitous technique that appears in a vast array of other movies.

“I had to keep saying, ‘This is right out of a camera; there’s no VFX work to this at all!’” Feige said, describing a sample reel from Eternals. “It was a beautiful sunset, with perfect waves and mist coming up from the shore on this giant cliffside—really impressive stuff.”

After watching Nomadland (for which Zhao just won the Oscars for best picture and best direction), Feige said he realized, “This is a signature style.”

Zhao’s first two films were also praised for their rugged, natural beauty. But Feige’s statement makes it sound like a) he didn’t watch those films before hiring her, and b) he’s flabbergasted by the concept of pointing a camera at some real scenery.

Now, Feige obviously has seen Zhao’s other work. In earlier interviews, he praised her ability to make “small, personal movies” while thinking in “grand, cosmic, gigantic terms,” making her a smart choice for a fantasy film like Eternals. However, these new quotes inspired widespread derision because instead of making Zhao look good, they just make the MCU look bad. Feige unintentionally highlighted Marvel’s reliance on green screen soundstages, directed by filmmakers who (with a few exceptions like Taika Waititi and Ryan Coogler) are often criticized for their lack of visual flair.

Despite the clueless tone of his comments, Feige does make a valid point. Zhao’s style of filmmaking is a departure from Marvel’s typical aesthetic. It is cool that she pushed for more location shoots, playing to her strengths as a filmmaker. But this detail is also a central element of Disney’s marketing strategy for Eternals. Feige’s comments are a perfect example of how the studio builds hype by lowering our expectations.

For almost a year now, Zhao and Feige have publicized their excitement about “magic hour” location shoots, and how Marvel allowed Zhao plenty of creative freedom. These talking points follow Marvel’s typical PR strategy of choosing one or two spoiler-free details about an upcoming project and repeating them throughout an extensive promotional campaign. That’s why everyone was ready to praise Doctor Strange‘s visual effects and “psychedelic” imagery, and why Captain Marvel was received by many as a feminist triumph. Those ideas were exactly how those films—a pair of derivative, formulaic blockbusters—were advertised.

There’s always grain of truth to these marketing statements, inflated by Marvel’s PR machine. Yes, Captain Marvel was the first MCU movie with a female lead. But there are plenty of other action films with female protagonists. Likewise, Doctor Strange and WandaVision are only weird by MCU standards. These PR campaigns encourage us to grade on a curve, praising Disney for ideas that are only revolutionary within the Marvel franchise. That’s how we end up with absurd situations like Feige hyping up Zhao’s ability to shoot on location.

Zhao is one of the most artistically accomplished filmmakers to work within the MCU, and her creative vision sounds far more appealing than the bland aesthetic of the Avengers movies. But Feige is trying to convince Marvel fans that “filming outdoors” is a groundbreaking technique, despite being a central element of countless movies, including mainstream blockbusters like, uh, Star Wars.