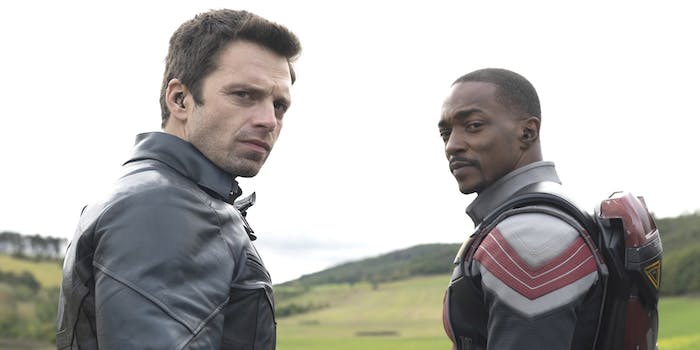 What do the Falcon and the Winter Soldier actually stand for?

This post includes spoilers for episode 4 of The Falcon and the Winter Soldier.

Marvel’s Flag-Smashers are an increasingly familiar type of Hollywood villain: terrorists whose goals seem objectively positive (equality; anti-fascist rebellion), but are demonized by their violent methods. Meanwhile, the heroes stand for a vague and politically neutral brand of “peace” and “justice,” which they support by, uh… violent methods. But it’s fine when they do it, because they’re the good guys.

Four episodes in, The Falcon and the Winter Soldier‘s politics remain deeply incoherent. We finally have a bit more detail on what Karli Morgenthau and the Flag-Smashers are fighting for, painting them as sympathetic figures. Apparently, when Thanos removed half the world’s population, the survivors came together to rebuild society without international borders. But governments are now trying to reinstate their old immigration laws, causing millions of people to fall through the cracks. Karli is fighting to help these vulnerable civilians, abandoned in refugee camps by the Global Repatriation Council. This subplot echoes some real-life reactions to the idea of “returning to normal” after the Covid-19 pandemic, arguing that “normal” isn’t actually a desirable goal. Maybe we should strive to make things better in the aftermath, reevaluating the way we live our lives.

Based on what we know so far, the Flag-Smashers have the most explicit moral stance in the show. They provide medical supplies and community support to displaced refugees. And while they do occasionally kill their enemies, you could say the same of the show’s heroes—and indeed the U.S. government. Episode 1 begins with Sam Wilson killing (alleged) criminals while invading Tunisian airspace on military orders, so the moral contrast between him and John Walker (the new Captain America) is frustratingly murky. Walker is a loose cannon who technically works with government oversight, while Sam and Bucky are vigilantes who just broke a supervillain out of jail for narratively incoherent reasons.

Perhaps unintentionally, episode 4 offers a cynical view of American interventionism. Obviously John Walker is a bad guy, ending the episode by beating a guy to death. But Sam and Bucky are almost as incompetent and unsympathetic. To find Karli Morgenthau, they track down her adoptive mother Donya Madani, who recently passed away. Their plan is to spy on Donya’s funeral and catch Karli during a vulnerable moment. To do this, they (and their supervillain sidekick Baron Zemo) barge into a refugee settlement, frightening the locals and bribing children to rat out Karli’s location.

This all plays out in Riga (the capital city of Latvia), where Sam, Bucky, and Walker incite noisy public fights in the middle of civilian neighborhoods. Since the Flag-Smashers are an international organization based in Europe, it’s unclear why these American superheroes are in charge of tracking them down. The Wakandan intervention subplot is subtle and precise by comparison, as a small squad of dora milaje warriors arrive with a specific goal: to recapture Baron Zemo and get out.

When they track Karli down at Donya Madani’s funeral, Sam tries to engage with her on a diplomatic level. As a former trauma counselor (a detail the show seemingly forgot until this moment), he offers Karli a sympathetic ear. However, this rather hackneyed scene is deeply muddled on a political level. We, like Sam, can easily sympathize with Karli’s cause. Meanwhile, John Walker is easy to hate. But when Karli argues that she’s making the world a better place, Sam says, “It’s not a better place if you’re killing people.” Which: sure. Murder is bad! But this seems pretty hypocritical in the context of Sam’s military backstory (he literally has killed people to “make the world a better place”!), and the Avengers’ body count throughout the MCU.

Also, Sam doesn’t actually engage with Karli’s motives. He doesn’t offer an alternative solution to the Flag-Smashers’ problem, possibly because Sam isn’t capable of helping. Sam and Bucky are classic, individualistic American heroes: a pair of self-motivated men who confront specific enemies in battle. Meanwhile the Flag-Smashers are attempting to tackle a complicated social problem as a community, to enact widespread political change. So far, The Falcon and the Winter Soldier seems totally unqualified to deal with these contrasting methods of “making the world a better place.” The overall theme is: Peace and equality are good, and violence is bad, unless that violence is doled out by the Good Guys.

The Falcon and the Winter Soldier is ostensibly about Sam Wilson coming into his own as a superhero. Earlier episodes touched on the idea of him becoming Captain America, and how this might intersect with his identity as a Black man. But beyond that, his characterization is surprisingly shallow. We don’t know what Sam Wilson actually stands for. Whereas in the Captain America movies, we always understood Steve Rogers’ moral goals. Introduced as an anti-fascist hero, Steve hated bullies and inequality. His main storylines were motivated by two things: rebellion against abusive authority figures, and loyalty to his best friend Bucky. He disobeys orders and brings down a government agency to reveal a neo-Nazi conspiracy at its core. Sam displays none of this moral clarity in The Falcon and the Winter Soldier. And the thing is, this doesn’t even fit with his earlier characterization.

Captain America: The Winter Soldier introduced Sam as an empathetic person with strong values, risking his life to help Steve bring down Hydra. He later becomes an international fugitive while fighting against an unjust law. But we now see Sam put civilians in danger while chasing after the Flag-Smashers, for reasons that aren’t adequately explained. Bucky’s motives make more sense—he’s personally invested in the supersoldier serum, which was stolen by the Flag-Smashers—but he’s also a more morally ambiguous character than Sam. In earlier films, he’s mostly driven by loyalty to Steve, and by a desire to escape and/or atone for his personal trauma. That continues here, as he tries to protect Steve’s legacy while joining Sam on his mission. And unlike Sam or Steve, he’s not really framed as a political or moral leader with a wider allegorical role.

Protagonists don’t need to be good guys to be interesting (see also: the entire prestige TV genre from Mad Men to The Wire), but The Falcon and the Winter Soldier is meant to be a pretty straightforward superhero story. It’s not pitched as a morally ambiguous drama like Jessica Jones. And with two episodes left to go, the show’s lack of moral and political clarity is a major problem. What are Sam and Bucky fighting for? Are they actually good at being superheroes? Are they helping anyone in a meaningful way? Or are they just slightly better than John Walker, a character specifically designed for us to hate?