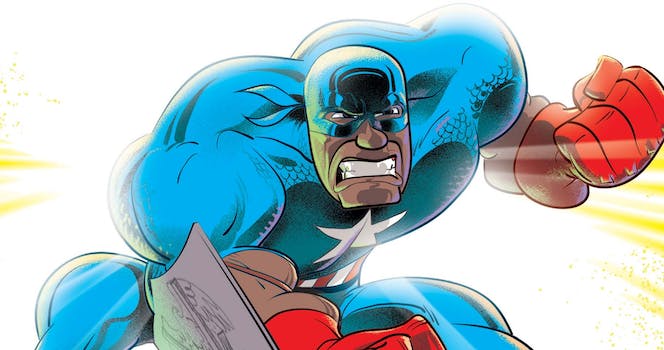 An introduction to the original Black Captain America.

This post includes spoilers for episode 2 of The Falcon and the Winter Soldier.

In between some fast-paced fight scenes and Sam/Bucky banter, this week’s Falcon and the Winter Soldier introduced an important new element to the Captain America mythos: Isaiah Bradley. Played by 69-year-old actor Carl Lumbly, Bradley is a retired supersoldier who gained super-strength from government experiments like Steve Rogers. But unlike Steve Rogers, Bradley didn’t become a patriotic icon. He’s a Black superhero whose existence was erased from the history books.

Created as a direct analogue to Steve Rogers, Isaiah Bradley made his debut in the 2003 comic Truth: Red, White & Black. Writer Robert Morales described his original pitch as “staggeringly depressing” for a Marvel comic: A Black superhero who gains his powers through government experiments (an intentional reference to the Tuskegee Study), but suffers due to institutional racism and ultimately comes to a tragic end.

In The Falcon and the Winter Soldier, we meet Isaiah Bradley as an elderly and embittered man living in a run-down part of Baltimore. He tells Sam and Bucky that he spent 30 years in jail, enduring unwanted experiments on his body. “How could nobody bring him up?” Sam demands, after Bradley kicks them out of his house. Sam is shocked to learn that the government created a Black supersoldier and treated him so poorly, removing him from the public eye. We can already see echoes of this experience in how the new (white) Captain America, John Walker, is being promoted as a celebrity replacement for Steve Rogers, sidelining Sam’s rightful role as his successor.

Isaiah Bradley’s original backstory was even grimmer than this. In the comics, Bradley was part of an all-Black regiment who were experimented upon to develop the supersoldier serum. Bradley is the only survivor, meaning that dozens of Black men died so Steve Rogers’ origin story could happen. The comic depicts white officers dehumanizing Black soldiers and sending them to die, and then lying to their families about what happened. And although Isaiah Bradley fought the Nazis in a Captain America uniform, he was punished for doing so. Sentenced to life in prison for stealing the Captain America costume, he spent 17 years in solitary confinement, and was eventually pardoned in exchange for keeping his mouth shut. By the time Steve Rogers discovers the truth in the present day, Bradley is suffering from brain damage as a longterm result of the serum. His story is only known as a word-of-mouth legend in the Black community.

Truth: Red White & Black is, needless to say, a major inspiration for The Falcon and the Winter Soldier. The first two episodes have already deepened Sam’s role as a superhero and touched upon Steve Rogers’ complicated legacy as Captain America. And by including Isaiah Bradley, the show introduces a political allegory that is, by Marvel standards, relatively hard-hitting in its attitude to the U.S. military.