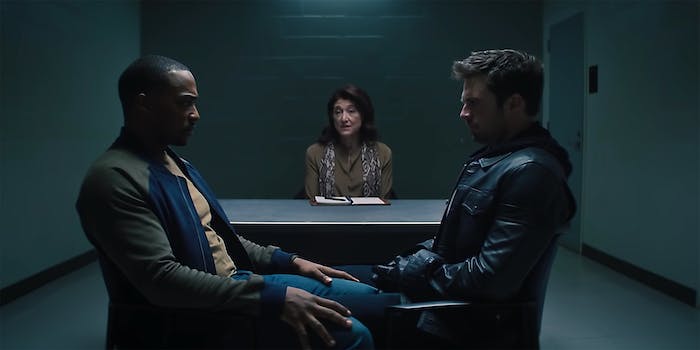 ‘The Falcon and the Winter Soldier’ embraces queerbaiting in episode 2

That Sam/Bucky therapy scene felt like a live-action fanfic prompt.

Queer subtext has been a core element of the Captain America franchise since day 1. The Falcon and the Winter Soldier is already embracing this theme, with Bucky Barnes’ court-mandated therapist forcing him to do couples exercises with Sam Wilson. But we’ll get into that in a moment. For now, some backstory.

Warning: This story includes spoilers for The Falcon and the Winter Soldier.

Steve Rogers’ relationship with Bucky was the emotional driving force of the Captain America trilogy, a star-crossed tragedy with romantic undertones. Steve/Bucky is probably the most popular romantic pairing in MCU fandom—which may actually have impacted the movies themselves. After Captain America: Civil War, Marvel began to downplay Steve and Bucky’s friendship, backing away from the emotional intensity of the first two movies. It wasn’t the first time a popular media franchise tried to distance itself from a queer fandom response. And in Avengers: Endgame, this storytelling strategy led to a uniquely unsatisfying finale for Steve, Bucky, and indeed Peggy Carter.

Of course, this love triangle is actually more of a love square. After positioning Bucky as Steve’s emotional motivation and damsel-in-distress in the first movie, Captain America: The Winter Soldier introduced Sam Wilson in what was, structurally speaking, the love-interest role. Befriending Steve in a classic meet-cute, Sam talks to Steve about his feelings while Black Widow receives the taciturn sidekick role. So there’s plenty of material for Sam/Steve shippers as well, leading into the later movies where Sam uproots his life to support Steve on the run. Meanwhile, Captain America: Civil War introduced the bickering dynamic we see between Sam and Bucky in The Falcon and the Winter Soldier.

Forced together by circumstance, Sam and Bucky are reluctant partners who constantly get on each other’s nerves. It’s a familiar buddy-cop dynamic, and episode 2 ups the ante with flirty moments like Bucky falling on top of Sam during a fight scene (an action movie classic!) and, yes, that couples therapy session.

Dr. Raynor (Amy Aquino) is a textbook example of a TV therapist. Her role in episode 1 isn’t to provide plausible mental health treatment, it’s to explain Bucky’s emotional state to the audience. Sure! Then in episode 2, she’s basically god’s gift to fanfic writers. Faced with two squabbling superheroes, her solution is to make them sit with their legs tangled together and gaze into each other’s eyes. Inspired! And really, this nails a key issue at the heart of the show. For Sam/Bucky shippers, it’s a godsend of new material. But it’s also a transparently obvious example of queerbaiting.

The MCU’s queerbaiting habit is a real “your mileage may vary” situation. Some fans are grossed out by how Disney capitalizes on queer fandom while refusing to include meaningful queer characters in the movies. Others are happy to just sit back enjoy stuff like the Sam/Bucky therapy scene. Honestly, plenty of people manage both perspectives at once. MCU fandom is often pretty far removed from what Disney is attempting to sell, and every queer headcanon is filtered through an awareness of Hollywood homophobia. It’s similar to how viewers can enjoy the franchise while also acknowledging its role as military propaganda.

To me, some of these Sam/Bucky moments felt pretty cynical. Marvel has faced years of criticism for its lack of queer representation in the movies, and queer ships play a central role in MCU fandom. Bucky Barnes, in particular, is widely interpreted as a queer-coded character. So while we can enjoy those Sam/Bucky scenes on their own terms, it’s hard to ignore the wider context. We’re used to seeing shows and movies tease their audience in similar ways—Sherlock, Supernatural, the Star Wars sequel trilogy—by either turning this subtext into a joke, or minimizing its role onscreen. After Steve Rogers’ aggressively heteronormative sendoff in Avengers: Endgame, this almost feels like an attempt to encourage queer fandom under more controlled conditions. A way to give fans what they want… without actually giving them what they want.