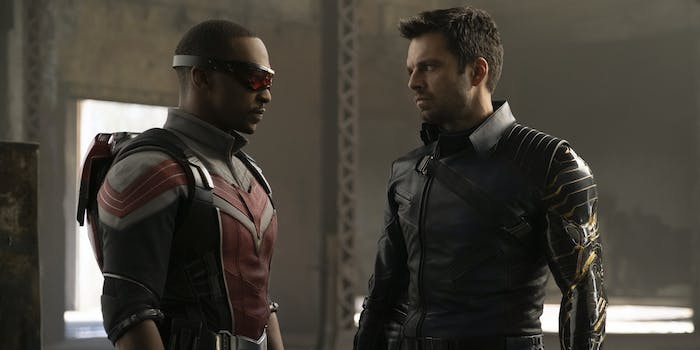 Falcon and the Winter Soldier/Disney+

He's getting a frosty reception from fans—and that's likely by design.

Like Spider-Man: Far From Home, in which we see a world that tries to grapple with the loss of Iron Man, Falcon and the Winter Soldier has to reckon with a world without Captain America. But in a post-blip world, the U.S. government opts for a quick and dirty solution by finding the next Steve Rogers, a move that doesn’t sit well with at least one Avenger as well as Marvel fans. His arrival has become a meme.

Warning: This article contains spoilers for the first episode of Falcon and the Winter Soldier.

At the end of FATWS’s series premiere, Sam Wilson (Anthony Mackie) is prompted by his sister Sarah (Adepero Oduye) to watch the TV. When she turns it on, a man is unveiling a new Captain America to the world, a response to recent events that made a country feel particularly vulnerable.

“While we love heroes who put their lives on the line to defend Earth, we also need a hero to defend this country,” the man says. “We need a real person who embodies America’s greatest values. We need someone to inspire us again, someone who can be a symbol for all of us.”

As the crowd cheers, a man wearing a costume that both looks very much like Captain America’s uniform and decidedly wrong walks out. To drive it home further, this Captain America is holding Steve Rogers’ shield, the one that Sam had just donated to the Smithsonian earlier in the episode.

Sam doesn’t say a word as he watches the events unfold on TV, but he doesn’t look happy about any of it.

Who is John Walker, a.k.a. new Captain America?

Who is this man? The show doesn’t reveal that information up front. We do know that the actor wearing the new Captain America costume is Wyatt Russell and that Russell is portraying John Walker, who was initially introduced as a villain called Super-Patriot in Marvel Comics. He’s also been called U.S. Agent and at one point took up the mantle of Captain America.

But with little context to the closing minutes of “New World Order,” all we have right now is our initial gut reactions. John Walker is wearing a lesser quality version of Captain America’s uniform and picked up Steve’s shield, and he probably doesn’t deserve either of them.

At one point, some fans were using #NotMyCap to reject this new Captain America and even compared the character’s square jaw to Carl from Pixar’s Up.

Set photos also revealed an aspect to the character that might not be very appealing: Captain America carries a gun now.

And some people even pointed out to John Walker appearing, even at a glance, a certain kind of outdated ideal.

Russell even foresaw that people would not be big fans of his character when he made his debut.

“People are probably going to hate it, and some people are going to love it,” he told USA Today. “[Movies and TV shows] are there to make people feel emotions, and I’m hoping that that’s what this show can do for people. Hopefully, they don’t hate me too much. It would be an honor, I guess, to be disliked in the Marvel universe.”

We will undoubtedly learn more about John Walker and how he embraces the Captain America mantle over the next five FATWS episodes. According to Marvel.com, “The patriotic flag flier U.S. Agent loves his country so much, he undergoes experimentation to gain superhuman strength and better fight for freedom.” For one, it’s unclear if Walker will also be an enhanced character in the show as well or if he’s just parading around as Captain America in costume. But in the comics, Walker is envisioned as Steve Rogers’ opposite, so as a character, Walker going to feel wrong and anti-Steve by design. Walker initially starts out as a villain, but he’s eventually convinced to use his abilities for good.

It’s likely that while Walker has the shield now, he might not have it by the end of FATWS. For one, Steve gave the shield to Sam at the end of Avengers: Endgame. (Falcon is another comic book character who took up the Captain America mantle.) “I don’t know if there’s ever been a greater symbol,” Sam said when he donated Steve’s shield earlier in the episode. “But it’s more about the man who propped it up.”

And while Sam might not find himself worthy now, chances are, that’s going to change by the end of the series. Steve knew what he saw in Sam.