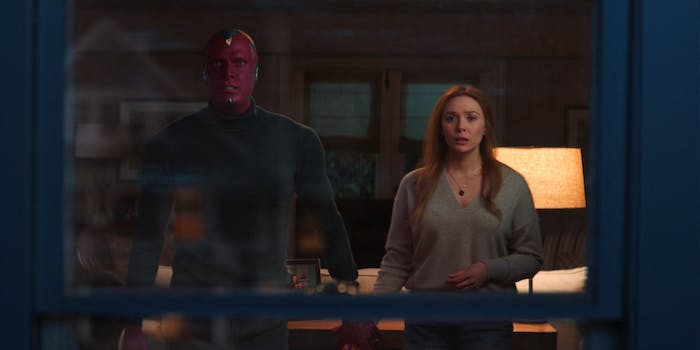 We probably should've seen this coming.

After several movies where Wanda Maximoff spent most of her screen time flinging beams of red CGI light, WandaVision gave her far more emotional depth and explored some more interesting elements of her superpowers. While her mind-control abilities were already known, the show gave them more nuance with its eerie sitcom dreamworld. But as the series drew to a close, the scale tipped toward a more typical MCU style.

Warning: This article contains spoilers for the WandaVision series finale.

The WandaVision finale ends, as expected, with Wanda acknowledging her hold over the citizens of Westview and (more or less) coming to terms with her grief. However, this is all couched in an extended sequence of—you guessed it!—Elizabeth Olsen flying around in a superhero costume, flinging beams of CGI light. Coupled with Monica Rambeau‘s Captain Marvel 2 teaser and a Magical Girl transformation sequence revealing Scarlet Witch’s new costume, the WandaVision finale leaned heavily on Marvel movie action over emotional storytelling.

And sure, Wanda’s superpowers and emotional state are connected; that’s the whole basis of the story. But Wanda’s catharsis has to share the stage with Agatha Harkness literally whipping out a magic textbook and reading some exposition about Scarlet Witch lore. The show made sure that we know Wanda is technically “more powerful” than Doctor Strange (her next big-screen co-star) and could theoretically end the world, but her children’s deaths are consigned to a footnote.

The weirdest moment was probably Vision’s final scene, a conversation that felt torn in several directions at once. Paul Bettany’s performance is one of the highlights of the show: moving and funny, providing a sensitive foundation alongside Wanda’s fragility and rage. This week, his role culminates in a well-thought-out showdown where he outwits White Vision through logic and empathy. But obviously he can’t survive for long, because this version of Vision is a simulacrum.

Vision’s goodbye seems oddly low-key compared to Wanda’s battle with Agatha, which is framed as the “real” ending before the peaceful epilogue where Wanda deactivates the Hex around Westview. Vision gazes into his wife’s eyes as they wait for him to dematerialize, and instead of launching straight into a tearful farewell, he asks, “What am I?”

So we’re treated to a weird blend of exposition and romantic farewell, where Wanda explains that Vision is “the piece of the Mind Stone that lives in me” (who cares about Infinity Stones at a time like this?), as well as a physical manifestation of her love and grief. Vision also hints that he could return from the dead once again, leaving things open for future spinoffs. And then they kiss goodbye, after frontloading the conversation with MCU ephemera. Huh?

Considering Marvel’s track record of interrupting emotional subplots with shared-universe minutiae, WandaVision‘s shaky conclusion isn’t a huge surprise. But it’s still disappointing. No one expected the show to deliver nine straight episodes of quirky sitcom dramedy, but instead of striking a more equal balance from beginning to end, it crammed most of its MCU tie-ins into the last two episodes. Once again, the WandaVision finale reminds us that Marvel is more interested in teasing and setting the stage for its upcoming projects, rather than sitting still to fully appreciate the story at hand.