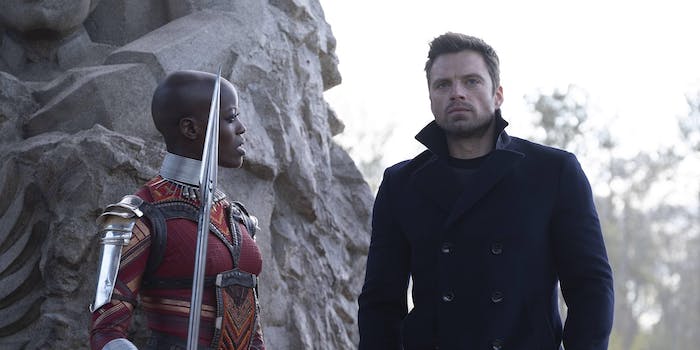 This episode felt like the show we actually wanted to see.

The Falcon and the Winter Soldier‘s fifth episode is a fully engaging hour of television, inviting the question: Why did it take so long for the show to find its feet? The first two-thirds of the series were disappointingly uneven in tone, struggling to develop the main characters or focus on any of the half-dozen disparate subplots. But episode 5 feels like the show we wanted from the beginning: a buddy-cop story with a healthy balance between action, Sam and Bucky’s emotional arcs, and the show’s more serious themes.

The political storytelling remains deeply flawed, ranging from clunky to downright incoherent. But the thing is, that doesn’t have to be such a big deal. We don’t generally expect radical politics or airtight logic from a Disney/Marvel product, in the same way that we can enjoy the Fast & Furious franchise without worrying about the laws of physics.

A show like The Falcon and the Winter Soldier primarily needs to be entertaining and emotionally engaging—which is, for the most part, what we got this week. Sam Wilson and John Walker both received more in-depth scenes tackling their attitude to heroism, with Sam sharing more screentime with Isaiah Bradley, a Black supersoldier who was penalized by the American government. Sam also returned home to reunite with his sister and explore his roots in Louisiana. And most importantly, we got plenty of Sam/Bucky scenes where the characters collaborated and talked about their feelings.

Montages can sometimes feel like filler, but this episode’s montages were fun and did some useful narrative legwork! We got to see Sam and Bucky working together with Sam’s community to repair the Wilson family boat, and Sam had a kick-ass training montage where he learned to use Captain America’s shield. Coupled with the scenes where Sam discusses his role as a Black superhero (which still involved a lot of stating-the-obvious, but felt more coherent than earlier episodes), this felt like the team-up show Marvel advertised in the first place. In general, it’s also what fans want to see more of in the MCU.

The MCU relies on making its audience care about characters who appear repeatedly throughout the franchise, but don’t necessarily get much emotional development. One of the main selling points of these Disney+ shows is they allow us to explore these characters without an apocalypse getting in the way. WandaVision was almost exclusively based around this concept, but The Falcon and the Winter Soldier muddied the waters by introducing three (now four) antagonists instead of just giving Sam and Bucky some room to breath.

Thanks to the dedicated nature of Marvel fandom, the MCU inspires a lot of intense analysis. Sometimes that analysis digs into the franchise’s flaws (for instance the uneven characterization, the heteronormative themes and the recurring military propaganda), while others extrapolate deep, thoughtful subtext from the source material. With The Falcon and the Winter Soldier, we have a show whose explicit political ideas often don’t stand up to scrutiny, and whose characterization is frustratingly thin. But episode 5 reminds us why so many fans are happy to overlook those flaws and enjoy the good points. There’s a kernel of a good show here, about a pair of characters we’re already primed to like. It’s just too bad it took five episodes to arrive.