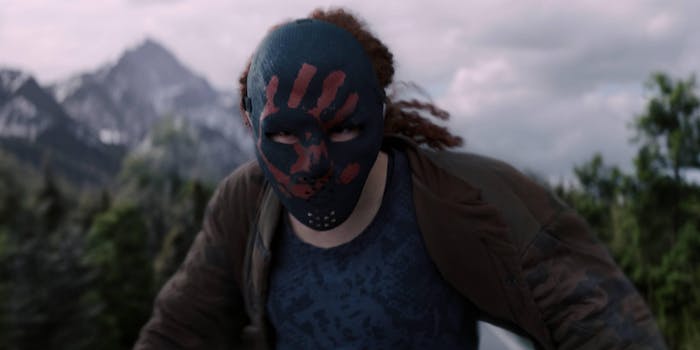 Did ‘The Falcon and the Winter Soldier’ delete a pandemic subplot?

This fan theory could explain why the Flag-Smashers storyline is so incoherent.

Some parts of The Falcon and the Winter Soldier just don’t make sense. That’s not unusual for superhero media, where suspension of disbelief is key. But in this case, those troublesome details mostly exist in one area: the Flag-Smasher subplot.

According to a popular fan theory, there’s a reason for that: The show originally included a pandemic storyline, which was later deleted due to COVID-19.

In the first two episodes, many viewers noticed that the Flag-Smashers were stealing “vaccines” with no mention of what those vaccines were actually for. We also see Karli Morgenthau’s mentor Donya Madani die from tuberculosis. But in general, this worldwide refugee crisis (and related issues involving medical care and disease control) is thinly written. It feels as if we’re missing chunks of the story, especially involving Karli and the Flag-Smashers’ goals as a political group.

YouTuber Nando v Movies explores this deleted pandemic subplot theory in a 16-minute video that feels increasingly plausible as the show wears on. Along with details like the vaccine thefts, he points out that many Flag-Smasher scenes feature a lot of ADR (automated dialogue replacement). This is a signal that something had to be rewritten or clarified after the scene was already filmed. New dialogue is recorded by the actors, and the audio is edited back into the scene.

Nando v Movies theorizes that Donya Madani’s “tuberculosis” was originally a different disease, and the Flag-Smasher storyline was meant to involve some kind of pandemic. Since The Falcon and the Winter Soldier began filming in October 2019, they’d already shot most of the show by the time COVID-19 reached Europe in March 2020. They were filming in the Czech Republic at the time, and the Flag-Smasher subplot mostly takes place in Central Europe. Then there was a gap of several months during the first wave of the pandemic, and production restarted in August 2020, wrapping in October.

Considering that timeline, it’s easy to imagine how a pandemic-induced rewrite may have played out. They couldn’t reshoot the entire show, but by deleting certain scenes and replacing certain dialogue in post-production, Marvel could remove an unwanted subplot.

As it stands, the Flag-Smashers storyline is incoherent. The show vaguely mentions that they want to “return to how things were during the Blip” but fails to explain what that really means. We also know they’re stealing resources for displaced refugees, but the backstory for those refugees is unclear. Likewise, the show doesn’t dig into the logistics of the Flag-Smashers’ anti-border agenda. This could be explained by a deleted subplot where the Flag-Smashers are stealing and redistributing vaccines during a pandemic. If so, then Disney decided this wasn’t an appropriate storyline to include in 2021.

No one from Marvel or The Falcon and the Winter Soldier has commented on the idea of a deleted storyline, but there were rumors of pandemic-related rewrites last year. Of course, maybe the Flag-Smasher subplot is just messy because Disney wanted to avoid its more controversial political themes. Either way, the result is a show where one storyline makes sense (the rivalry and political contrast between Sam Wilson and John Walker), while the other main element (the Flag-Smashers) feels totally disjointed and underwritten.