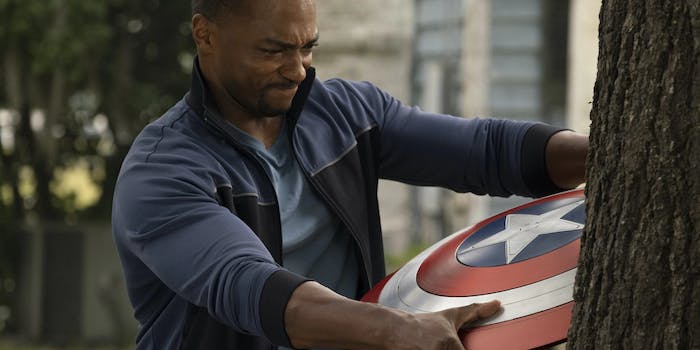 Review: ‘The Falcon and the Winter Soldier’ is already a political quagmire

This review includes minor spoilers for an early scene in episode 1.

Continuing the Captain America saga, The Falcon and the Winter Soldier‘s politics are deeply chaotic from the get-go. Glossing over any criticism of Marvel’s military ties, the show begins with the Falcon (aka Sam Wilson, played by Anthony Mackie) invading Tunisia with his lovable robot drone Redwing. In real life, Tunisia is home to one of the USA’s secret drone bases. In the MCU, it’s background scenery for a fun and thematically unexamined action sequence.

The Falcon and the Winter Soldier

RELEASE DATE: March 19, 2021
CREATOR: Malcolm Spellman
STREAMING: Disney+
Anthony Mackie and Sebastian Stan star in this action-packed Captain America spinoff. They’re a charismatic duo, and the show does a good job of expanding the Falcon’s role. But the political themes are already deeply messy within the first few minutes of episode 1.

Watching as Sam flies overhead, his military liaison (Danny Ramirez) hurriedly points out that Sam can’t cross into Libyan territory. Thus we meet a central theme of the show: the sanctity of international borders. As per the trailers, some of the show’s main villains are a terrorist group known as the Flag-Smashers. They want a “unified world without borders”—an implicitly leftist goal. Premiering shortly after the Trump administration left office, this whole concept is troublesome, to say the least. I assume more nuance will emerge in episodes, but for now, we watch an American hero kill people in North Africa.

This eye-popping introduction is some of the most blatant military propaganda we’ve seen in the MCU; a competitive field including Captain Marvel’s Air Force recruitment campaign and Iron Man’s work as a weapons manufacturer. But the focus shifts as the episode wears on. Without going into spoilers, Sam Wilson soon gets more character development than he received as Captain America’s pal. Underutilized in the movies, most of his screentime was previously devoted to action scenes or charming banter.

Six months after Avengers: Endgame, both of the title characters are at a loose end. Bucky is struggling with memories of his time as a brainwashed HYDRA supersoldier, while Sam isn’t sure how to proceed as a superhero. And, of course, their mutual BFF Captain America is gone. Created by writer/producer Malcolm Spellman (Empire), the show quickly establishes Sam as a relatable middle-class figure, introducing more of his personal life. Echoing the comics where Sam Wilson became the new Captain America, the show will explore his identity as a Black superhero—and his conflicted relationship with patriotism. In Mackie’s own words, “How does a Black man represent a country that does not represent him?”

Like Scarlet Witch’s role in WandaVision, this show has a lot of freedom to expand Sam’s role. Bucky, however, is a different matter. The first two Captain America movies gave him a compelling emotional arc and origin story (perhaps my favorite in the MCU) that was later interrupted by the Avengers sequels. That means he arrives on Disney+ with plenty of baggage —and the show will unavoidably prioritize some elements of his backstory over others. Comic book readers will recognize this situation all too well, since Marvel and DC characters shift and evolve from book to book. The Falcon and the Winter Soldier‘s Bucky Barnes is wrestling with guilt (continuing his earlier arc) while also being amusingly grouchy, setting the scene for a buddy-comedy dynamic with Sam.

Directed by Kari Skogland (Vikings, The Handmaid’s Tale), the show embraces straightforward Marvel fare. Plenty of action, with a distinctive split between the Sam’s airborne scenes and the Winter Soldier’s intimidating physical heft. There’s more screentime for emotional storytelling than we saw in the movies, but overall it’s a familiar MCU vibe where all the key themes are explained simply in the text. Episode 1 teases an appealing pair of character arcs, while reminding us of Anthony Mackie and Sebastian Stan’s charisma. It also gives some much-needed attention to how normal people fared during the cataclysmic “blip” between Avengers: Infinity War and Endgame. However, the show’s politics are already pretty dubious.

As a fan of Captain America, I do think it’s possible to tell a smart, politically relevant story using these characters. In the comics, Sam Wilson and Steve Rogers have both inspired fruitful discussions (and criticisms) as Captain America, reflecting back on real-world issues. But while the MCU is capable of exploring progressive and anti-racist themes (Black Panther; Thor: Ragnarok), the closer it gets to realistic American politics, the more conservative it becomes.

This fact ties into the franchise’s love affair with law enforcement and the military. Plenty of MCU projects include military or government villains (Captain America: The Winter Soldier), but they’re invariably portrayed in a “bad apple” context, exposed or defeated by the good soldiers and government agents. So while Steve, Sam and Bucky could be portrayed as progressive and/or anti-establishment figures (a common theme in Captain America fanworks, rooted in the first two movies), Disney always returns them to their military roots.

That’s how we end up with the somewhat dubious tone of The Falcon and the Winter Soldier‘s first episode. The show will explore Sam’s role as a relatable Black hero, adding weight to his rather superficial part in the films. At the same time, he now stars in an allegorical story where the villains are explicitly anti-patriotic and anti-border. We’re invited to agree that borders are good and important, and it’s Sam’s job to defend them. The show also thinks that it’s fine for the U.S. military to invade foreign airspace and kill a bunch of people. Can a Marvel spinoff untangle this web of conflicting ideas? Well, we have five more episodes to find out.