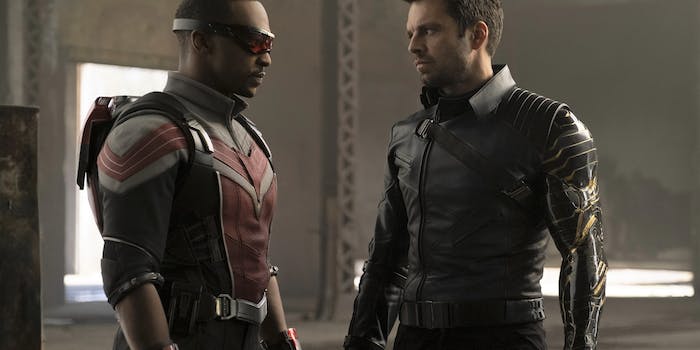 Who are the Flag-Smashers, Marvel’s new anti-patriotic villains?

A look at the politically contentious antagonists of 'The Falcon and the Winter Soldier.'

The Falcon and the Winter Soldier‘s first episode gave fans plenty to chew on, exploring Sam Wilson and Bucky Barnes’ everyday lives and introducing a new antagonist, the Flag-Smashers. Described as an anti-nationalist organization that wants a world without borders, they’re inspired by a classic Captain America villain—whose backstory I’ll explain in this post. But their role also ties into some controversial political themes for the MCU, particularly Marvel’s relationship with the U.S. military. (Warning: This post only includes spoilers for episode 1, but I do mention casting announcements for upcoming characters.)

The Flag-Smashers are introduced via Sam’s new sidekick Joaquin Torres (Danny Ramirez), who tracks the organization using an app. This app allows him to infiltrate a Swiss meet-up, where disgruntled civilians don masks and distract the police during a bank heist. The scene ends with Torres getting beaten unconscious by a Flag-Smasher. Earlier in the episode, Torres explains that the Flag-Smashers believe “the world was better during the Blip” after Avengers: Infinity War, a period of (we assume) socioeconomic chaos. “They want a unified world without borders,” he says.

The show will actually include three antagonists, the other two being Baron Zemo (Daniel Brühl, Captain America: Civil War) and John F. Walker (Wyatt Russell), a new Captain America who usurps Sam Wilson’s rightful ownership of Steve Rogers’ shield. Walker and Zemo seem like clean-cut villains (one for Sam and one for Bucky), while the Flag-Smashers could potentially be more sympathetic and misunderstood. The MCU hasn’t really dug into how the world changed during the Blip, but this episode does give Sam’s sister a relatable subplot about Blip-related economic hardship. There’s an obvious link between her being rejected for a loan, and the Flag-Smashers cutting out the middleman by robbing a bank.

To be honest, there should be way more societal fallout from a five-year event where half the world’s population vanished into thin air. But the MCU simply isn’t going to tackle that level of worldbuilding, so The Falcon and the Winter Soldier is doing the best it can with stuff like the Flag-Smashers.

The Flag-Smasher in Marvel Comics

In the comics, Flag-Smasher is a person rather than an organization. The original version was a Swiss man named Karl Morgenthau, a direct ideological opposite to Captain America’s fascist nemesis the Red Skull. After Morgenthau’s father was killed in an embassy riot, he became an anti-nationalist terrorist. The TV show will introduce a female version of this character, played by Erin Kellyman—who had an arguably similar role as the masked rebel leader Enfys Nest in Solo: A Star Wars Story.

While the Red Skull is a straightforwardly evil monster, the Flag Smasher is one of those supervillains whose argument kind of makes sense… but who is otherwise just a cartoonishly violent extremist. His introductory comic, Captain America #312 in 1985, shows him symbolically destroying flags and then holding a crowd at gunpoint so he can explain his manifesto. Like, sure! Worldwide equality sounds good! But the scene clearly sets him up as a dangerous weirdo compared to Captain America’s calm and reasonable persona.

The Falcon and the Winter Soldier‘s Flag-Smashers echo mainstream imagery of antifa protesters and the hacktivist movement Anonymous. They’re a decentralized group who are radicalized online, and they wear identical masks during IRL meet-ups. So far, so V for Vendetta.

If we trust Torres’ description of the Flag-Smashers, we’re about to see a storyline where Sam Wilson… defends the philosophical concept of borders and patriotism? Kind of? Of course, the show also sets up a subplot where Sam Wilson fights a branch of the U.S. government, embodied by the new Captain America. The Flag-Smashers may turn out to be sympathetic figures by comparison; a civilian group with relatable motives. However, there’s absolutely no way this show will conclude with Sam taking a stand against nationalism. It’s going to end with him picking up the shield and modeling the right kind of nationalism.

As I discussed in my initial review, The Falcon and the Winter Soldier is a clear example of the MCU’s military propaganda. This particular detail often inspires one of two reactions among Marvel fans: “Duh, who cares if it’s propaganda, I’m just here to watch Sam and Bucky kick ass.” (Fair!) Or, “The MCU can’t be propaganda, it openly critiques the U.S. government and military!” This latter argument misunderstands the way these stories work on multiple levels.

Obviously, most people aren’t going to watch The Falcon and the Winter Soldier and walk straight into the nearest Air Force recruitment office. They’re going to open a new browser tab and start looking at Tumblr gifs. But the show does have close ties to the military, as proven by its official premiere on an Air Force Base. The first episode begins with Sam heroically fighting foreign criminals in Tunisian airspace, using a high-tech flight suit developed by a military contractor. This scene explicitly echoes real-life American warfare in North Africa and the Middle East, framed in a positive light. A local man literally thanks Sam for his service, with Sam replying, “Always happy to help.”

While the show also includes a U.S. military/government villain (John F. Walker), this sets up a familiar formula. The MCU will happily tell stories where fascistic villains infiltrate U.S. government agencies, but the story always ends with a military/law enforcement hero defeating them so we can return to the status quo. That’s what happened in Captain America: The Winter Soldier and Civil War, Agents of S.H.I.E.L.D., and even WandaVision, where a pair of heroic FBI and S.W.O.R.D. agents depose the evil Director Hayward. Problem solved! Except five minutes before they do this, a platoon of S.W.O.R.D. footsoldiers were happy to hold two children at gunpoint. So the organization largely remains the same, just with Hayward out of the picture.

“Massive government overhaul” isn’t a fun topic for a superhero movie, so it makes sense for the MCU to focus on simpler conflicts. But in terms of political messaging, these stories encourage us to sympathize with military/government heroes (Sam Wilson, Steve Rogers, Nick Fury, Agent Coulson, Jimmy Woo, Carol Danvers, Sharon Carter, James Rhodes), who use violence and superior technology to protect America. Many of these heroes are women and people of color, tying into Disney’s push for more diverse and inclusive casting. Photos from Disney’s upcoming Ms. Marvel show depict the MCU’s first Muslim hero (a civilian teenager) wearing an Air Force jacket.

It’s not breaking news to say that Marvel loves military stories. That’s been a central theme since Iron Man, and it’s an obvious choice for a Falcon/Winter Soldier show. But the introduction of the Flag-Smashers definitely raises some questions. As I said before, they may turn out to be sympathetic antiheroes, tying into a storyline where Sam Wilson clashes with the “official” government-endorsed Captain America. At the same time though, this show premiered at an Air Force base, and Marvel Studios has a close relationship with the Pentagon. Make of that what you will.