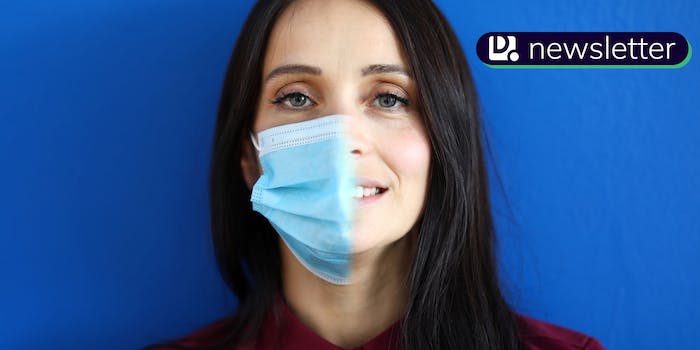 It’s Monday, and I hope you had a good weekend. We kick off this week with our Tech Reporter Mikael and his “One Dumb Conspiracy” column. It’s about a fake Bill Gates suspension on Twitter duping people online.

As always, we’ve also got all of the internet culture news you need to know… like what is a “pre-COVID time capsule?” So, let’s dive right into it!

DYSTOPIA: The Staten Island District Attorney used asset forfeiture to pay for controversial facial recognition software from Clearview AI, according to legal documents. The attorney paid $10,000 for one year of the software, which created a massive database of images of people’s faces scraped from the internet. You can check out our full report here.

BEFORE THE DARK TIMES: A TikToker says that after more than two years of working from home because of the COVID-19 pandemic, he returned to his office to see that his desk was like a “pre-COVID time capsule” that a calendar from March 2020 and a used coffee cup.

LABOR: Amazon Labor Union President Christian Smalls detailed the tech giant’s union-busting efforts in testimony before Congress. Some of the tactics included bringing in “classrooms” to warehouses that would be used to spread anti-union sentiment, Smalls said. That’s only part of what he testified. Check out our full report to read more.

No, Elon Musk did not suspend Bill Gates from Twitter

A fabricated screenshot circulating on Twitter for the last week has convinced some conspiracy theorists that Tesla CEO Elon Musk suspended billionaire Bill Gates from the platform.

Since announcing his plan to purchase the social media platform for $44 billion, Musk has unwittingly led countless conspiracy theorists to believe that Twitter had become the Wild West of the internet overnight.

Yet despite Musk’s acquisition being far from finalized, prominent conspiracy theorists who had previously been banned from Twitter began flooding back in. Not only that, supporters of the QAnon conspiracy theory were even analyzing Musk’s tweets in an attempt to uncover what they believed were hidden messages.

Even with all signs pointing to the reality that no changes had been implemented, one tweet appearing to show Gates’ account being suspended was shared nearly 4,000 times. Gates seems to be a magnet for conspiracy theories, ranging from ones about his farmland, to him unleashing smallpox, to him attempting to block out the sun.

The tweet, however, was clearly a joke and did not even correctly resemble a suspended account. Accounts that have been suspended do not show profile images or other information as was seen in the image.

Either way, numerous conspiracy theorists were quick to celebrate the imagined victory while others wondered how Gates had gotten suspended in the first place.

“What was the violation?” one user asked. “Anyone know?”

Another user argued that the move seemed to undermine Musk’s stated goal of having a platform that adhered to free speech absolutism.

“Wouldn’t this go against what @elonmusk wants?” they asked. “Pretty sure he wanted everyone to have open dialogue.”

But others were actually skeptical over the legitimacy of the tweet. Despite this, some conspiracy theorists attempted to argue that no one had really fallen for it to begin with.

The tweet even made its way to Facebook where at least one user lashed out at Musk for the non-existent ban.

“Emm. This is one of the many things I was worried about,” the user wrote. “He’s a narcissistic egomanic [sic] he can’t deal with criticism or conflicting Ideologies. So what he can’t control he will block or destroy!!”

Gates was never suspended. And as users argued over the fake screenshot, Gates continued to tweet as normal.

Musk isn’t expected to actually take control of Twitter, assuming the deal goes through, until sometime later this year.

Not a fan of the Amazon Firestick? You’ve got options.

It’s no surprise why Amazon Firestick is the most popular streaming device—but it’s far from the only great option out there. Wondering which one is best for you? We’ve got you covered. These are the best Amazon Firestick alternatives for every situation.

🏀 This Twitter user is attracting a ton of criticism for thinking that three-time NBA champion Dwyane Wade is involved with Roe v. Wade.

💵 A Dollar Tree manager has captured the attention of social media after a user posted a video of her running the entire store by herself.

🏠 “Shaking” is what a man says in a new viral video as he recounts how leasing staff allegedly walked in on him while he was naked in his home.

🥕 A positive review of one of Amazon Fresh’s tech-heavy locations has ignited a fierce debate after the video was posted, with one user arguing: “I wonder how many workers this will displace.”

🍲 Master the art of cooking for one with these kitchen hacks for single living.*

🥝 Maven is on a mission to streamline cohort-based course creation for “knowledge influencers.” Sign up for Passionfruit, the Daily Dot’s weekly creator economy newsletter, for more coverage.

🐶 An Uber driver canceled a blind woman’s ride and drove away after they saw her with her service dog, a TikToker claimed in a viral video.

A viral TikTok exposed a white man—dubbed a male “Karen” by users—for making racist remarks toward an Asian manager at a Korean restaurant. His friend left the restaurant, leaving him with no method of payment besides Apple Pay… which the establishment didn’t accept as payment.