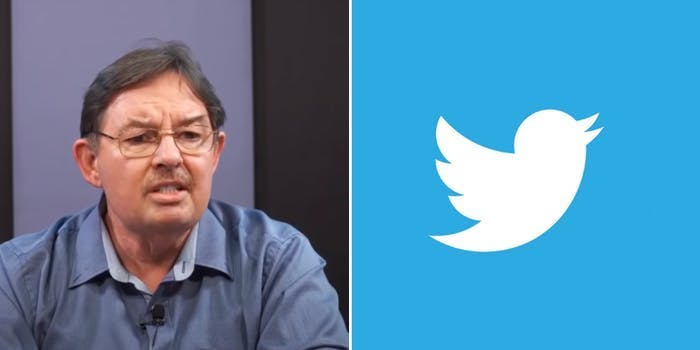 Despite falsely believing Elon Musk will protect them, far-right users are getting booted for ban evasion.

Prominent conspiracy theorists are attempting to return to Twitter in the wake of Tesla CEO Elon Musk’s purchase of the platform earlier this month. But the far-right figures, who were all previously banned from the social media website, are once again losing their accounts.

After Musk offered to purchase Twitter for $44 billion, right-wing users began celebrating what they were certain would be a new golden age of free speech absolutism on the platform. The planned acquisition appeared to lead to an influx of new right-leaning users and an exodus from those identifying as progressive.

And although Twitter explained that the shift in users was the result of organic activity, conspiracy theorists became convinced that Musk had already begun to implement internal changes at the company.

The only problem, however, is that Musk has not taken control of Twitter. Musk’s purchase still requires shareholder and regulatory approval. But that hasn’t stopped numerous banned far-right figures from attempting to set up new accounts under the false belief that they would be protected by Musk.

As noted by the Daily Beast, veteran GOP operative Roger Stone, who was banned from Twitter in 2017, returned to the platform on Thursday under the handle @RogerStoneUSA.

“Well bitches I’m back on Twitter,” Stone said on Telegram. “I’m anxious to see how strong Elon Musk’s commitment to free speech is.”

Despite clearly stating that he would be protected by Musk, Stone later claimed that the new account was merely created to “prove a point” about Twitter censorship.

“I posted a new account to prove a point,” Stone told the Daily Beast. “I look forward to whoever made the decision to suspend my account getting fired. Attn: Elon Musk.”

Stone is far from the only one to falsely believe that Musk’s purchase would protect them from being re-banned. The QAnon conspiracy theorist Jim Watkins, father of fellow QAnon guru and congressional hopeful Ron Watkins, likewise returned to Twitter after his ban in January of 2021.

Just like Stone, the elder Watkins was banned just as quickly for violating Twitter’s rules on ban evasion.

Tracy “Beanz” Diaz, a well-known QAnon promoter who was central in making the conspiracy theory mainstream among conservatives, also attempted a return to Twitter on Thursday.

Just like her cohorts, Diaz was quickly booted from Twitter as well. Her removal led many conspiracy theorists to begin tagging Musk, convinced that the billionaire would reinstate her account.

But not all banned users have been removed. Another QAnon leader known as VincentKennedy has been active since returning to Twitter on Wednesday and has already racked up more than 15,000 followers.

Unlike the other banned users, VincentKennedy appears to realize that he will likely have his account removed at any time.

“This account already has a shelf life unfortunately,” he tweeted.

With the future of Twitter still uncertain, it remains unclear whether banned users will be welcomed back anytime soon if at all. And with former President Donald Trump claiming that he will only be using his social media platform Truth Social, it seems unlikely that Twitter will become the old haven many of his supporters remember it to be.