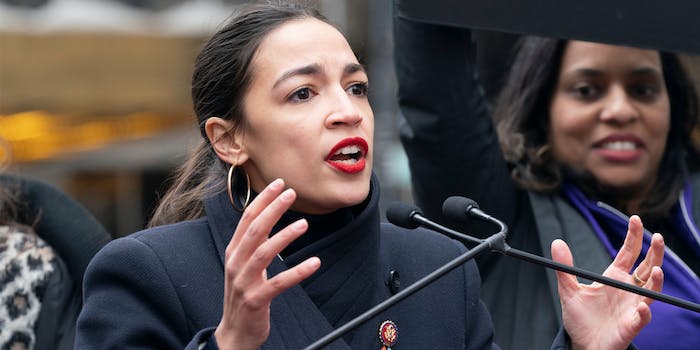 ‘I was talking about Zuckerberg but ok’: AOC claps back after Elon Musk trolled her tweet

When Elon Musk tried to troll Alexandria Ocasio-Cortez on Twitter, he didn’t expect her to clap back with a scathing reply.

Ocasio-Cortez tweeted, “Tired of having to collectively stress about what explosion of hate crimes is happening bc some billionaire with an ego problem unilaterally controls a massive communication platform and skews it because Tucker Carlson or Peter Thiel took him to dinner and made him feel special.”

In a now-deleted tweet, she clapped back: “I was talking about Zuckerberg but ok.”

One commented, “I love this man for his hilarious response.”

Another said, “It was the perfect own – wish she’d left it.”

Musk may have felt personally targeted by the tweet as the billionaire moved to acquire Twitter this week, purchasing the social media platform for $44 billion. Musk, who describes himself as a “free speech absolutist”, has people concerned that his takeover of the platform will offer a haven for trolls and disinformation.

Alexandria Ocasio-Cortez, a Democratic Socialist, is known for her criticism of billionaires. She recently tweeted, “Billionaires be like “the extreme far left is taking over” when the “extreme far left” in the US is “medicine shouldn’t bankrupt you,” “wages should cover rent,” & “maybe it’s bad that Wall St companies profit off mass surveillance, manufactured housing crises, and caging people”.”