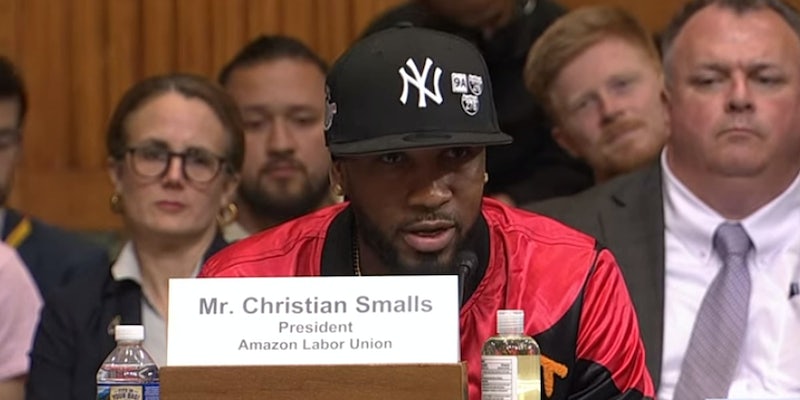 Smalls was invited by Committee Chairman Sen. Bernie Sanders (I-Vt.) to speak at a hearing on taxpayer money going to companies accused of violating labor laws, specifically Amazon. Smalls was asked by Sanders to describe the pressures endured by workers when they want to form a union.

“Let me just describe what the environment is, these buildings are 14 NFL football fields, 1 million square feet, some of them over 1 million square feet,” Smalls said. “Amazon flies in hundreds of union busters from all over the country, pretty much all over the world. They come into the facility, they isolate workers every single day, question them, pretty much gaslighting them, acting like they’re working to improve the conditions. But really, they’re just polling to see who is pro-union and who’s not.”

Smalls said Amazon will bring in “classrooms” to warehouses that can seat “50-60 workers” and use them to spread anti-union sentiment for over an hour, four days a week.

“Imagine being a new hire at Amazon, your second day, you don’t even know your job assignment, and the first thing they do is march you into an anti-union propaganda class,” Smalls said.

According to Smalls, Amazon also plastered the facility with anti-union notices and flyers, some of which he said were spreading false information about him specifically.

“They pretty much spread rumors and lies about the union members … they demonized myself, saying that I have a vendetta because I was fired two years ago wrongfully,” Smalls said.

Smalls also spoke to the police presence during Amazon union votes or rallies, saying the company used the police to “intimidate workers” and that he was arrested twice at rallies in Staten Island.

At the beginning of the hearing, Sen. Lindsey Graham (R-S.C.) chastised Sanders for holding the hearing in the first place and said Sanders politicized the committee.

Graham also laid out the process of filing a complaint against a corporation for union-busting and claimed the committee hearing was subverting that process.

Smalls responded to Graham in his opening statements, addressing the senator directly.

“The process for when we hold these companies accountable is not working for us, that’s the reason why we’re here today … it’s a workers issue,” Smalls said. “We are the ones suffering.”

The hearing comes on the heels of an Amazon worker-led unionization effort that started at the JFK8 facility last month. Last week, however, the union hit a snag after a separate Staten Island facility voted against unionization. Amazon is challenging the JFK8 union vote, saying the National Labor Review Board was biased towards the union, and that organizers were harassing people for voting against the union.

Amazon did not immediately respond to a request for comment about Smalls’ claims in his testimony.