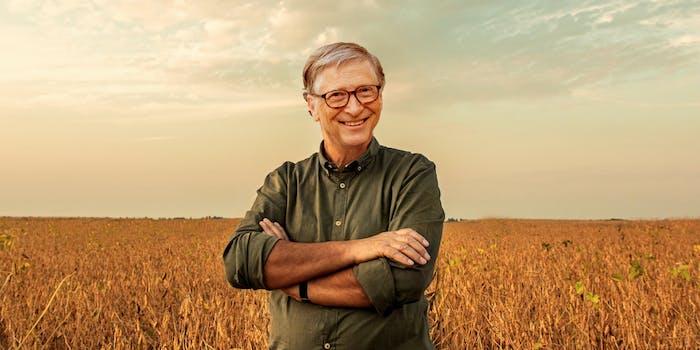 Bill Gates now owns more farmland than anyone in the U.S.—conspiracy theorists want to know why

On April 15, the Guardian solicited questions for a crowd-sourced interview with Bill Gates. Given the conspiracy theory community’s vision of the Microsoft founder as a genocidal maniac hell-bent on killing billions of people when he wasn’t palling around with Jeffrey Epstein, the responses, sent over Twitter, were predictable.

The call got thousands of interactions wanting Gates to be questioned about his relationship with Epstein, his role in COVID-19 vaccination, and whether he truly wants to “reduce the world’s population.” And it spawned a popular thread on the Reddit forum r/conspiracy, mostly about his links to Epstein. Others were even more trollish, asking what he’d like to eat in prison, where he got a medical degree (he has never claimed to have one), how much he likes the taste of human blood, and how long he’s been a servant of Satan.

But another line of questioning wanted answers to something that even the most seasoned Gates-alarmists might not know much about—Gates recently buying up a huge amount of U.S. farmland as a personal investment, with some sources estimating it to be as much as a quarter-million acres over 19 states.

It’s an amount big enough to make him the largest private farmland holder in the country, which didn’t seem like a good thing to the people who already believe Gates wants to drastically reduce the planet’s population. Is the farmland buying part of his evil scheme to become some type of “food czar” and control what people eat and how much? Why is nobody talking about it?

It’s not clear exactly how much land Gates privately owns, but it’s a lot. Most sources peg the number at around 240,000-245,000 acres based on a report published in early 2021 from the farming blog Land Report, which followed the paper trail to Cascade Investment, a firm founded by Gates. Gates’ farmland purchases, which have mostly been made in the last five years, started in 2017 when he bought $520 million of farmland spread over five dozen properties from the Canada Pension Plan Investment Board. Land Report found that Gates also appears to own about 24,000 acres of “transitional” land, usable for building new residential areas.

Much of the discourse about Gates is impossible to separate from conspiracy theories. But like almost everything with him, the truth about what he’s doing is much closer to a boring and sensible answer than a dark and salacious one. While his links to Epstein remain murky (but may have been a factor in the ending of his marriage), there’s no compelling evidence he was ever on Epstein’s mysterious private island, as internet hoaxes claim.

Gates himself has downplayed his links to Epstein, calling a potential philanthropic partnership “a mistake in judgment.” And the conspiracy theories about Gates engineering vaccines to cull the population are either invented or based on out-of-context quotes from a TED Talk in 2010 where Gates talked about the need to slow population growth in the developing world.

But the idea that Gates is buying up huge swaths of American farmland, possibly for nefarious purposes, is less-well know—and does have some truth to it. And many commenters, given the chance to actually pose a question to Gates, simply wanted to know why Gates was buying so much land and what he intended to do with it. Past tweets questioning the purchases have gotten tens of thousands of retweets, and the subject has spurred articles from a number of major outlets, including the Guardian itself, which wrote about it in 2021.

Many internet reports about the purchase are more conspiratorial, claiming his percentage of American farmland owned is “80%” or “all the farmland” and declare it to be an existential threat to the freedom of Americans to eat natural food. Such a “massive” purchase would put Gates personally in charge of the food supply, conspiracy theorists claim, which he will poison or give to his Chinese allies while Americans starve. All told, these people believe Gates has a plan to “change the way America farms”—a phrase also used in mainstream reporting about the purchases—and that can’t be good for anyone who isn’t part of his globalist cabal.

And it’s true that he’s now the top private farmland holder in the country. While it sounds alarming that one person could own nearly a quarter of a million acres of farmland, whatever acreage Gates holds is a fraction of the 911 million acres of farmland in the lower 48 states. Even as the country’s largest landowner, this means Gates owns less than .03% of all the farmland in the U.S. That’s hardly an amount that can dominate agriculture, send millions of Americans to their deaths, or stop growing grain to wean people off beef.

But, concerned citizens ask, isn’t Gates rich enough to buy as much land as he wants? Not quite. Even if Gates were to sink his entire personal fortune—estimated by Forbes to be $134 billion—into farmland at the 2020 average acre price of $4,442, Gates could only buy 34.6 million acres, about 22%.

But why own a quarter of a million acres in the first place? Even if his intentions with the land aren’t the stuff of cartoonish world domination schemes, they still matter.

Gates’ first acknowledgment of his farmland purchases came in a Reddit AMA in March 2021. When asked why he was buying so much farmland, Gates claimed that it wasn’t connected to climate change or philanthropy (these aims are handled by a nonprofit called Gates Ag One, founded in 2020), but an investment in emerging food and fuel technologies.

“The agriculture sector is important,” Gates wrote. “With more productive seeds we can avoid deforestation and help Africa deal with the climate difficulty they already face. It is unclear how cheap biofuels can be but if they are cheap it can solve the aviation and truck emissions.”

Gates has been a major proponent of biofuel technology, seeing it as one of the keys to a greener and more sustainable future. So buying land to test growing crops to power biofuels tracks with his overall priorities to both reduce the effect of gasoline emissions and get in early on a potentially lucrative technology

Other reports have Gates’ land growing a number of staple crops beyond those intended for biofuel, such as potatoes, onions, and corn—all some of the most commonly grown food in the U.S. He’s also apparently taking in income by renting at least some of the land out to tenant farmers for growing food—an arrangement that encompasses almost 40% of the available farmland in the country, according to the USDA.

Ultimately, Gates’ land purchases represent a solid way to grow his private holdings, as multiple investment experts told Yahoo in 2021. Farmland returns a higher profit than the S&P 500, and there’s currently a huge opportunity to get it cheaply: as much as 370 million acres might come up for sale in the next two decades, with older farmers wanting to get out of the business and their children not interested in staying in the business.

Food will always be a basic need, and taking away the sinister connotations that always seem to follow Gates around, the purchases can be looked at simply as a good investment being bought when it’s less expensive. And Cascade isn’t the only private firm to buy up farmland. It’s just the only one connected to Gates.

Ultimately, for Gates to be seen as “controlling America’s food supply,” he’d have to buy millions of acres and hope nobody else realizes what he’s doing or does anything to stop him.

That’s not to say he might not buy more at some point, but so far, his buying has remained steady and he’s purchased only a tiny fraction of America’s farmland. It makes for a tempting conspiracy theory to slot Gates’ farmland purchases next to vaccines and Epstein, but right now, it’s more a good investment and less of a conspiracy.

The answers to the Guardian’s questions for Gates are slated to run next month.