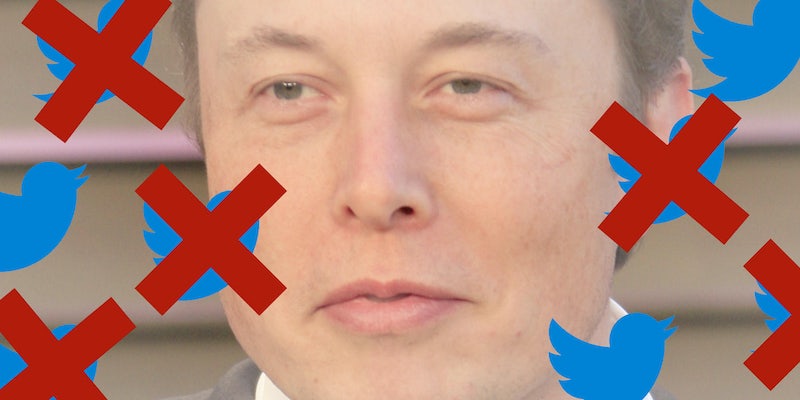 Some banned accounts have already re-joined.

On Monday, Twitter announced that Elon Musk is buying the company for $44 billion and plans to take it private. The news sparked a firestorm of reactions. Many fear that under Musk’s leadership Twitter will become a cesspool of hate speech, disinformation, and harassment.

Conversely, people who’ve been permanently suspended from Twitter are celebrating. They believe that Musk will unban them.

Musk’s comments about buying Twitter lends credibility to this assumption. “Free speech is the bedrock of a functioning democracy, and Twitter is the digital town square where matters vital to the future of humanity are debated,” Musk said in a statement announcing the deal. Musk also said that he intends to make the algorithm public, defeat spam bots, and authenticate “all humans.”

Most conspiracy theorists and far-right figures who’ve been booted for violating Twitter’s terms of service only absorbed one portion of Musk’s statement: Free speech.

Rep. Marjorie Taylor Greene (R-Ga.), whose personal account was suspended earlier this year, began taunting her haters even before the news of Musk’s purchase was official. “Prepare for blue check mark full scale meltdown after @elonmusk seals the deal and I should get my personal Twitter account restored,” she tweeted from her congressional account.

Islamophobe Laura Loomer, who was banned four years ago for violating Twitter’s rules against hate speech, seems also to be contemplating her return. “Good luck to Elon!” Loomer wrote on Telegram. “I hope he means it when he says he’s a ‘free speech absolutist.'”

Ron Watkins, who was ousted during Twitter’s 2021 purge of the QAnon accounts, predicts that “banned accounts will be restored.” Other far-right figures and QAnon conspiracy theorists who believe in a powerful international cabal of child-eating pedophiles who worship Satan are similarly optimistic that the platform that ousted them will welcome them back with open arms.

One of the trucker convoy Telegram channels posted that it’s back on Twitter, which suspended it earlier this year.

Some users on other platforms like Gab, Parler, and Gettr said that, while they’re glad Musk is buying Twitter, they have no plans to abandon the fringe platforms at present.

To the disappointment of many, the most prominent person permanently suspended from Twitter, former President Donald Trump, is also unwilling to leave their new social media home. On Monday, Trump told Fox News that he will not rejoin Twitter. Instead, he said he’ll start posting on his own platform, Truth Social.

A smaller contingent of people are skeptical that Musk will change Twitter for the better.

They point to Musk’s statement that he intends to authenticate “all humans” as essentially a requirement for them to reveal their true identities. “‘Free speech but only if you dox yourself’ doesn’t sound like a very good deal to me,” one person wrote on Telegram.

Only time will tell precisely how Twitter changes now that Musk owns it, and if it changes at all.