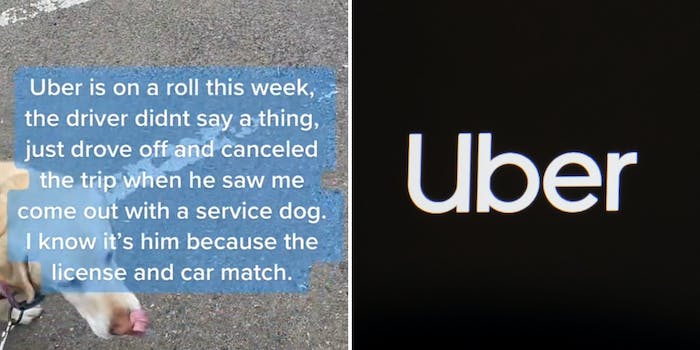 'They can't deny service dogs for any reason.'

In a viral TikTok video, a blind woman says her Uber driver canceled her ride and drove away after seeing her service dog.

“Uber is on a roll this week. The driver didn’t say a thing, just drove off and canceled the trip when he saw me come out with a service dog. I know it’s him because the license and car match,” the text overlay reads on the video shared by the woman, Melissa (@melissal.92).

The video, shared April 30, shows Melissa recording a video as she walks toward her Uber, but they drive away before she has a chance to walk up to the car. “Is this him? Did he just drive off? Did he just see my service dog and drive off?” she says.

Melissa noted in the comments that if drivers have an allergy, she is typically willing to negotiate by requesting a new driver. “I usually try to be respectful IF drivers tell me they’re allergic by getting a new driver, but the guy would have had to talk to me first,” she said.

She also commented that she usually texts drivers to let them know she has a service animal beforehand, but they typically don’t see it because they’re driving.

This isn’t the first instance Melissa has experienced of an Uber driver refusing to accept her ride.

A TikTok video she shared just four days earlier shows a driver telling her to request a pet-friendly ride before driving away. In the caption, Melissa said she was going to report the driver to Uber for denying her service.

Her most recent video of an Uber driver refusing her ride received almost 35,000 views and sparked debate among viewers in the comments.

Some suggested the driver was allergic to dogs, despite allergies not being an exception to Uber’s service animal policy. “Shouldn’t automatically assume the worst. It wasn’t proper behavior but the driver could be allergic,” one user said.

Another viewer argued that drivers should not be required to accept service dogs due to the damage they could cause to their car. “Dog hair doesn’t come out and nails scratch leather seats which he should have every right to not deal with that despite ‘ada,’” they said.

One TikToker proposed a solution: waivers on pet-friendly rides for those with service dogs. “I think people with service dogs should have a waiver for the fee and that way they can get pet friendly vehicles. because this isn’t fair for either,” they said.

However, several viewers showed support for Melissa, noting that drivers can be terminated for violating Uber’s service animal policy.

“If I had a car for Uber I would make sure to get all the people with service dogs. That’s just not right,” one user said.

“People are always making excuses for the driver as if it literally isn’t in their contract that they can’t deny service dogs for any reason,” another noted.

The Daily Dot reached out to Melissa via TikTok comment and Uber via email.

Update 4:00pm CT, May 9: Uber responded to the Daily Dot’s request for comment: “Discrimination has no place on the Uber platform or anywhere, and Melissa’s experience is unacceptable. We have a specialized team that investigates these types of cases and have taken appropriate action.”