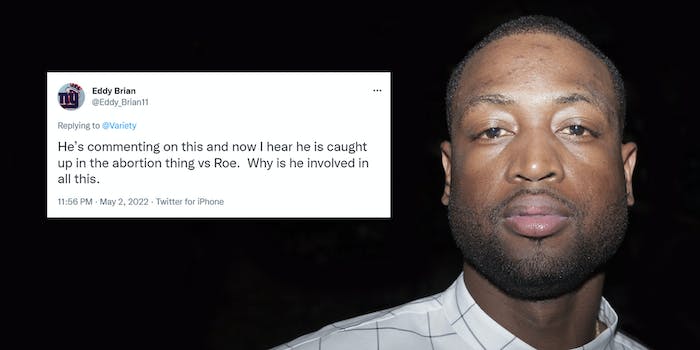 @Eddy_Brian11 replied to a video from Variety that showed Dwayne Wade speaking about being a father to his daughter Zaya, who came out as trans in 2019.

“He’s commenting on this and now I hear he is caught up in the abortion thing vs Roe,” @Eddy_Brian11 wrote. “Why is he involved in all this.”

In a later reply, they said Wade “does not need to have his name on the Supreme Court case.”

@Eddy_Brian11 does not have any original tweets but has many replies to other tweets dating back to 2018.

Whether it was a joke or not, Twitter user @ihatethiskid posted screenshots of the exchange, which has since gone viral with over 10,000 retweets and 83,000 likes.

Users were quick to pile on the absurdity with memes and commentary.

“The Supreme Court should never have started selling the rights to name their cases to celebrities,” one user wrote.

“Everyone knows roe v wade occurs when your canoe hits shallow water and you have to make a decision,” said another.

“He’s not the only athlete involved in a famous Supreme Court case. I remember in school learning about Jim Brown v Topeka Board of Education,” wrote a third.

The Wade in Roe v. Wade was Texas district attorney Henry Wade, who was enforcing the state’s abortion ban.