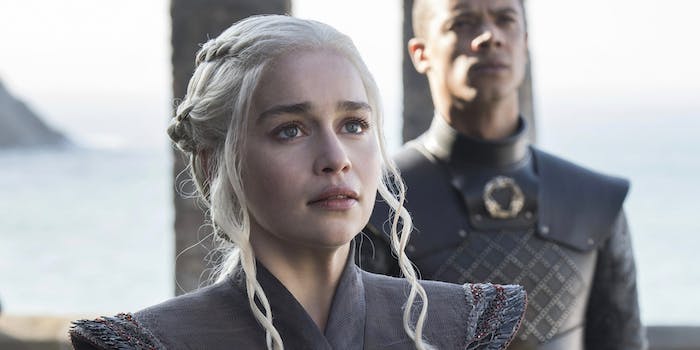 It could be the most vital stronghold in the Seven Kingdoms in the war to come.

Warning: This article contains spoilers for the season 7 premiere of Game of Thrones, “Dragonstone.”

We haven’t seen Dragonstone, the former stronghold of Stannis Baratheon, since he last occupied it during Game of Thrones season 4. But now that we’ve finally returned, it could end up being the most important location of all in Westeros.

Aptly named “Dragonstone,” the closing moments of the episode show Daenerys Targaryen finally returning to her birthplace after a lifetime away. It’s a mostly silent homecoming except for the emotional beats of Ramin Djawadi’s score. That is until Daenerys makes her way to the head of Stannis’ war map, saying, “Shall we begin?”

But unknown to Daenerys, it’s already begun. While King’s Landing is very interested in Dragonstone because of Daenerys’ arrival, others are looking to it for very different reasons. Its ground contains a substance could help Westeros, above all else, survive the Long Night.

While Daenerys’ ancestor, Aegon the Conqueror, took control of the Seven Kingdoms (except for Dorne) with fire and blood, Dragonstone—a volcanic island just off the coast of Westeros—has been in the hands of the Targaryens and their family for far longer.

In A Song of Ice and Fire, Dragonstone started off as a western Valyrian colony around 500 years before the start of Game of Thrones. Valyrian magic was essential to forming the look and intimidation factor of the castle. The Targaryens moved there 12 years before the Doom of Valyria after one family member had a prophetic dream, and they took their dragons with them. In the show, Samwell Tarly tells Gilly that the Targaryens “built their first stronghold there” when they invaded Westeros.

We mostly know it as Stannis’ main castle in Game of Thrones, and the show touches on that aspect of its history in Daenerys’ return. Dragonstone was abandoned but his banners remained, ready for Daenerys to tear down.

Dragonstone is Daenerys’ first homebase in Westeros, but as “Dragonstone” reminded us, it’s also home to what might be the largest stash of dragonglass in the Seven Kingdoms.

Dragonglass, or obsidian, is a kind of glass shard formed from volcanoes. Both Sam and Meera Reed used dragonglass to kill White Walkers, but it was also used to form the Night King by the Children of the Forest—and stop Benjen Stark from turning.

Stannis told Sam about Dragonstone’s dragonglass supply in season 5 after hearing Sam’s story of how he killed a White Walker with it, but it had largely slipped Sam’s mind—and Sam probably didn’t believe Stannis all that much. That all changes after Sam discovers a map of Dragonstone (and its dragonglass reserve) in an old book he borrowed from the Citadel’s restricted section. 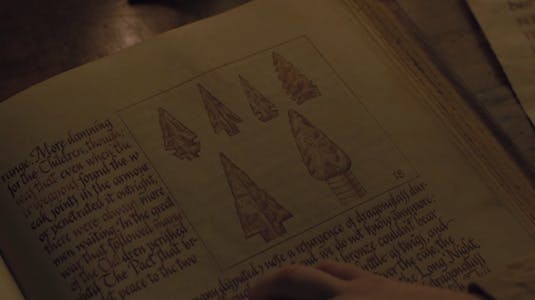 All of the pages have nuggets tucked away, even beyond the introduction of Dragonstone as a be-all for season 7. On one page is the suggestion that dragonglass can be used to cure diseases and that “little harm incures from the ingestion.” With a greyscale-stricken Ser Jorah Mormont tucked away in Oldtown, is it possible that Sam might give him dragonglass to cure his ailments?

While Sam and Gilly’s books don’t explicitly say, “Dragonglass kills White Walkers, so get your hands on all of it,” it does hint at a certain kind of potential. One page states that the ancient Valyrians took dragonglass as well as gold “from their mines beneath the Fourteen Flames” while another revealed that Aegon the Conqueror’s descendants would decorate their weapons with dragonglass.

“The royal fashion for dragonglass ornamentation soon spread throughout the Seven Kingdoms to those wealthy enough to afford it: Hilts and pommels were and are the most common decoration, for dragonglass is too brittle to make a useful crossguard,” the text reads. “Indeed, its very brittleness is what relegates it to the great houses and the most successful merchants.” 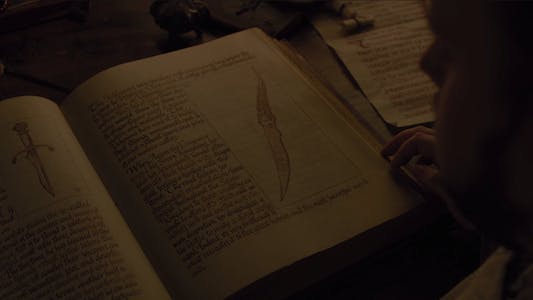 Pictured on another page is an example of one such weapon made with dragonglass—one we’ve seen before.

A familiar blade in an ancient text

A callback from Game of Thrones’ very first season, the dagger pictured in Sam’s old book is made of Valyrian steel (which can also kill White Walkers) and looks to be the same one used in the attempted assassination of Bran Stark. Tyrion Lannister is framed for the assassination attempt, but the dagger, which also has a handle made of dragon bone, was traced back in the books to Robert Baratheon, who won it from Littlefinger; in the show, Littlefinger claims that Tyrion won it. Ned has possession of the blade later in season 1, and while it’s unclear where the dagger is right now, Littlefinger takes it back in the books.

Even before the illustration showed up, we’ve already seen the blade. Maisie Williams, dressed as Arya Stark, appeared to be wearing it in a photoshoot for Entertainment Weekly.

Arya Stark has the Valyrian Steel dagger used the in the attempt on Bran's life in S1 & I have questions #GameofThrones7 pic.twitter.com/JGyjTMbtCa

The question is, how does she get it? And given it’s pictured in a passage about Dragonstone and dragonglass, how much of a role will it play?

Bringing the two dragons together

The most important aspect of the scene is that it inspires Sam to write Jon about it—and possibly drive much of Jon’s season 7 plot.

It’s unclear if Sam knows that Jon’s no longer Lord Commander, so if that’s the case, the letter would reach Dolorous Edd first, who could pass it on to Jon. Or, if Sam does know about Jon taking back Winterfell, he could get it straight there. Either way, whenever Jon receives the letter, his path will be clear: Go to Dragonstone, where Daenerys will be waiting for him.

Jon might not be interested in the war for the Seven Kingdoms—the threat from the north is all that matters—but it’s possible that he might have to care about it enough to get Daenerys on his side. She’s vital not just for her dragons, but what she sits on under her new throne.