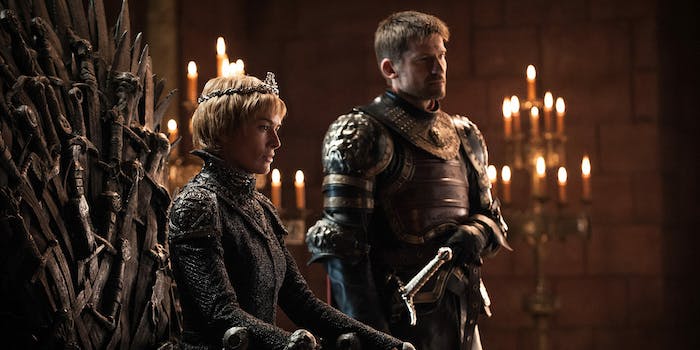 The fate of two characters you barely know whose fate could play out again.

A preview for Game of Thrones episode 3 shows Euron Greyjoy’s triumphant return to King’s Landing, complete with his “gift” in tow, but it could set in motion events that’ll look disturbingly familiar to some in Westeros.

Before the climactic battle at the end of “Stormborn,” which resulted in Euron and his men taking Ellaria Sand, Tyene Sand, and (probably) Yara Greyjoy prisoner, Game of Thrones reminded the audience of a few important things they may have forgotten along the way.

“Have you forgotten what happened to our grandfather?” Sansa asked Jon. “The Mad King invited him to King’s Landing and roasted him alive.”

The execution of Rickard Stark and his eldest son Brandon at the orders of King Aerys II Targaryen happened before either Jon or Sansa were born, but it was an important point in Westerosi history. Apart from Rhaegar Targaryen kidnapping or running away with Lyanna Stark, it’s the single biggest event that led to Robert’s Rebellion and the end of the Targaryen reign.

Rickard and Brandon Stark have been name-dropped a handful of times and alluded to throughout Game of Thrones, but A Song of Ice and Fire reveals more detail from someone who witnessed it.

Brandon Stark, who previously bested Petyr Baelish in a duel for Catelyn Tully after Brandon became betrothed to her, was on his way to Riverrun for his wedding when he heard about his sister Lyanna’s disappearance. Arriving in King’s Landing, Brandon furiously demanded that Rhaegar “come out and die,” but instead Aerys had him arrested and asked Rickard to come to King’s Landing and answer for his son’s crimes.

According to Jaime Lannister in A Clash of Kings, Rickard demanded a trial by combat. Aerys unsportingly chose fire as his champion (instead of an actual person) and suspended Rickard with fire burning beneath him. To make matters worse, as Rickard burned alive, Brandon—who had a noose around his neck—strangled himself attempting to reach a sword that could’ve saved his father. As they both died, Jaime and hundreds others witnessed it without doing a thing. (In their defense, Aerys was pretty unhinged at that point, and likely would have killed any detractors.)

Jaime relayed part of this story to Ned in season 1, calling both Brandon and Rickard brave and that “they didn’t deserve to die like that.” Jaime also noted that when he eventually killed Aerys his mind went back to the day he saw Brandon and Rickard die. (Ser Barristan Selmy, who alluded to the event in season 5, may have also been present.)

“Five hundred men just stood there and watched,” Jaime said. “All the great knights of the Seven Kingdoms. You think anyone said a word, lifted a finger? No, Lord Stark. Five hundred men and this room was silent as a crypt. Except for the screams, of course, and the Mad King laughing.”

While those men didn’t do anything to save the Starks at the time, the whole event did play a significant role in convincing the lords of Westeros to overthrow Aerys. It never made it to television, but Game of Thrones filmed Rickard and Brandon’s deaths. A brief clip of it is seen in a pre-season 1 Game of Thrones trailer, which Game of Thrones producer and writer Bryan Cogman confirmed was meant to be in the show’s second episode.

While Brandon has yet to appear at all in Game of Thrones, Rickard showed up briefly in season 6’s “The Door” as he said goodbye to Ned before he left for the Vale.

Will the Mad Queen emerge?

There’s little-to-no chance that Ellaria and Tyene Sand are getting out of King’s Landing alive after Euron brings them in, so the question of their fate is more along the lines of, how will they die? And how cruel and painful will it be?

Ellaria is directly responsible for murdering Cersei Lannister’s only daughter, Myrcella. Tyene has committed murder and played a part in the coup of Dorne, but her main crime here is siding with Daenerys Targaryen; to be honest, Cersei probably doesn’t care too much about Bronn being poisoned. Cersei could have one of them killed, both of them killed, or hold one hostage under the threat of death unless the other convinces Dorne to align with King’s Landing. We suspect Cersei will reveal some maniacal plan, given that the episode is called “The Queen’s Justice.”

But how she goes about it could also lead to Cersei’s downfall.

If Cersei’s punishment for the Sands is especially cruel, it could possibly remind Jamie of what he once witnessed in the throne room. Cersei has always had a violent streak. Now that she’s hardened by grief and her reign is under threat, the Sands could feel the full force of her wrath.

One redditor believes the sentence will involve making Ellaria watch Tyene die, while Manu Mishra suggests that Cersei’s torture of both Ellaria and Tyene may be the breaking point. It’s unclear if Jaime knows about Cersei setting the Mountain on Septa Unella last season, but his uneasy look after seeing her being crowned on the Iron Throne speaks volumes.

After all these years, Cersei still remembers the prophecy Maggy the Frog told her: that she would marry the king, that she would have three children who would all die before her, and that a “younger and more beautiful” queen would cast her down. The show doesn’t mention it, but in the books Maggy tells Cersei that she will die at the hands of the valonqar, or “little brother.” That explains part of why she hates Tyrion so much, but Jaime, who’s the younger twin, also fits the bill.

Cersei married the king, and all of her children are dead. She’s now in power trying to stop the other queen from striking her down. What she might not anticipate, though, is the man she loves again making the difficult choice between serving a ruler he swore to protect or killing the ruler to ultimately save the Seven Kingdoms. If Rickard and Brandon’s deaths come back to Jaime’s mind when Cersei deals her “justice” for Ellaria and Tyene, Jaime might be prompted to think, “What won’t she do to stay in power?”