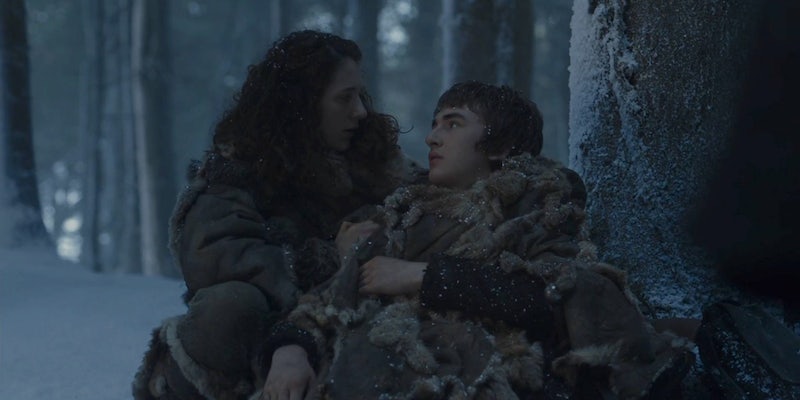 We've waited years for this.

Warning: This article contains spoilers from the most recent Game of Thrones episode, “Blood of My Blood” and minor spoilers from A Song of Ice and Fire.

We’ve seen plenty of returns after multiple seasons on the sidelines and even a few resurrections on Game of Thrones. There was even more so than usual in an episode that also brought back Walder Frey and Edmure Tully and named-checked the Red Wedding and Brendyn “Blackfish” Tully. But “Blood of My Blood” also saw the return of a character we haven’t seen or heard from since season 1.

That’s right. Benjen Stark is back—and he’s changed a lot since the last time he stepped foot on the Wall. (And now we have the second kinda-sorta happy Stark reunion of the season!)

As he explained to his nephew Bran and Meera Reed, he was north of the Wall when he was stabbed in the gut with an ice sword by a White Walker. Left to die, the Children of the Forest saved him and stopped him from turning into a wight by stabbing him with dragonglass, just like we saw them do with the Night’s King last week. Benjen’s affiliated with the Three-Eyed Raven, who sent for him before he died. He has an idea of what Bran needs to do with the Night’s King comes: Bran must be ready for him.

Where do we even start?

An undead rider by another name

There’s no doubt that this is Benjen Stark in the flesh. Joseph Mawle, who played the character in season 1, is back, and he has memories of a much younger Bran in Winterfell. However, book fans will probably know the entrance and mannerisms of this character by something else—even if he’s not riding a giant elk.

“I think it’s much cooler to have him show up now instead of guiding Bran to the cave, because Bran already had Jojen and Meera for that,” Isaac Hempstead Wright told Entertainment Weekly. “Instead he’s there to help pick up the pieces when their safe haven is destroyed and to give Bran to have that family connection again [after Hodor dies].”

Fans may have lost hope of ever seeing Coldhands on Game of Thrones, but given the amount of references to Benjen within the past few episodes—both as a cruel prank to Jon Snow before his death last season and in a few of Bran’s visions this season—some had an inkling that he would soon return.

It’s a fair question, but first some backstory.

Fans have been trying to figure out Coldhands’s identity for more than a decade as they pore over the few clues offered in the books. He calls Samwell “brother,” and according to Leaf (a Child of the Forest), “They killed him long ago.” Even if he’s only been dead for a of couple years, a logical conclusion was that Benjen was Coldhands.

But that no longer appears to be the case. Last year, a page from George R.R. Martin’s original manuscript of A Dance With Dragons surfaced online after a redditor viewed the manuscript at Texas A&M’s Cushing Library and Archive. On one such page, Anne Groell, Martin’s editor, asked if Benjen was Coldhands, and Martin responded with “NO” written in red ink.

If we take Martin at his word, Benjen isn’t Coldhands—at least in the books. For the purposes of the show, it might make more sense to reintroduce Benjen as Coldhands for a couple of reasons. One, it’s probably easier to explain an undead Benjen to a show audience than to bring in a random actor to portray the wight-like creature.

As Martin has said about other adapted plots on Game of Thrones that differed from the books, “The show is the show, the books are the books; two different tellings of the same story.” Benjen can be Coldhands on the show and not be Coldhands in the books. They’re similar but ultimately different stories.

Benjen may have stopped the wights from killing Bran and Meera and will probably continue doing so as long as they’re being hunted, but he’s probably no match for the Night’s King or the other White Walkers. But he can still help him.

He knows what the Three-Eyed Raven had planned for Bran, who has a bit of the Three-Eyed Raven in him. Bran can’t control his visions right now, which show flashes from the past, present, and possibly future, but he needs to be prepared by the time he meets the Night’s King. Benjen might just be the next-best thing for him.

Plus Benjen already has experience mentoring another one of Ned Stark’s sons.

As for what that entails? Bran hasn’t quite figured that one out yet.