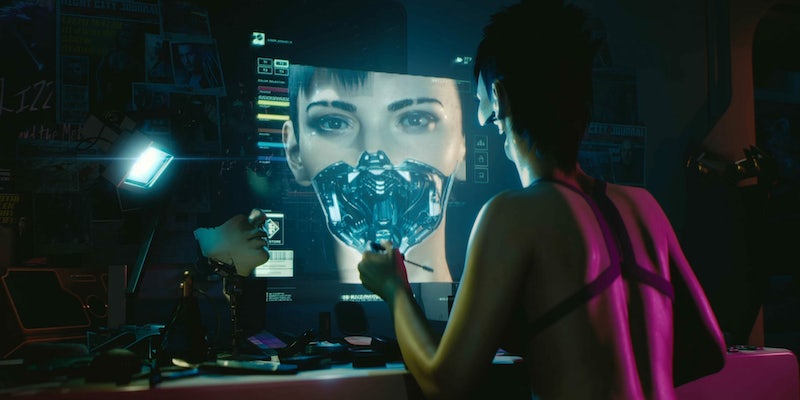 Cyberpunk’s trans roots are being written out of Hollywood.

Cyberpunk is having a resurgence, with several big-budget releases in quick succession: Ghost in the Shell, Blade Runner 2049, Mute, Altered Carbon, and the hotly anticipated video game Cyberpunk 2077. The genre’s 1980s heyday now feels shockingly prescient, predicting the rise of surveillance culture and tech giants like Google. But modern cyberpunk is not living up to the genre’s subversive roots. With a conservative adherence to old tropes like sexy droid girls and noir detectives, there’s a distinct lack of imagination—especially when it comes to gender identity. Considering cyberpunk’s unique popularity among transgender sc-fi fans, this seems like a missed opportunity.

Potter is interested in biohacking, a classic cyberpunk trope that eventually became a reality. The archetypal example is surgically inserting a microchip under your skin, usually to streamline everyday tasks like opening doors or making digital payments. Often seen as a frivolous hobby for tech nerds, biohacking can be a necessity if you’re trans. It’s just described using different terms.

Even at the best of times, medical transition requires people to jump through bureaucratic hoops. As Potter puts it, “The Man, as it were, is in charge of every step of the process, from intake to surgery.” At worst, you may have to take a DIY approach and buy hormones online—just one of the reasons why the internet has been a game-changer for the trans community. “For many of us, the first and only spaces we could be ourselves were online. Many of us built our identities behind avatars and screen names, behind walls of text or games.”

The absence of trans representation comes up a lot in cyberpunk fandom, most recently with regards to Cyberpunk 2077. When the game demoed at E3 this year, the character screen only offered two gender options—something fans had already been wondering about. Asked about the possibility of gender fluidity in the game, one of the designers said, “It’s too early to say, but it’s definitely something that we’ve looked at.” Cyberpunk media loves to ask whether robots can truly be human. It rarely asks why a robot would identify as male or female.

Potter notes that better representation is a long time coming: “To give you a frame of reference, non-binary people have always existed. Genders outside the binary were found in almost every society, dating back thousands of years. I didn’t know that when I was ten, twelve, fifteen, even eighteen. I experienced dysphoria without a word for it, just a deep discomfort with many aspects of my body. It was easier to imagine myself as a cyborg than my birth sex because it was the closest thing to not-male-or-female I had as a concept.”

There’s an urgent need for more diverse gender representation across the board, with cis actors still being cast as trans characters while trans actors are often restricted to token roles. This problem feels especially relevant within cyberpunk. The genre thrives on stories about people upgrading their bodies and downloading their minds into new vessels, popping futuristic drugs to survive in an oppressive capitalist dystopia. Characters fight to have their humanity acknowledged by Kafka-esque governments, forging new identities and dodging surveillance.

Cyberpunk fiction is packed with political allegories, many of which relate to trans experiences. However, these stories are always repackaged before they meet a mainstream audience. That means casting someone like Scarlett Johansson or Ryan Gosling as a straight, cis hero, and focusing on neon-hued style over substance.

Where are the trans people in modern cyberpunk?

“I think as trans people we already see the world as relatively dystopian,” explains writer and film critic Ruksana Faraon. “Legal and medical systems are constantly calling our personhood into question. We have to fight for recognition and legal victories. There’s something inherently punk about being trans. Just by existing, we’re throwing a wrench into established ideas about gender, bodies, and identity.”

Cyberpunk’s fascination with physical augmentation always resonated with trans people and people with disabilities, yet there’s a persistent trend for cisgender, able-bodied protagonists. (Or in the case of Cyberpunk 2077, a bizarrely offensive attitude to people who use prostheses to improve their quality of life.) Even the recent Ghost in the Shell reboot failed to engage with these ideas in a meaningful way, despite being a story about the mind and body divide.

It’s easy to see why people are frustrated about the lack of trans characters in recent cyberpunk hits. Netflix’s Altered Carbon is practically begging for a storyline about gender identity, for example. The show centers around a piece of technology that lets people transfer their memories into a new body, widening the gap between rich and poor. (Rich people can afford replacement bodies ad infinitum, while regular folk either put their memories in cold storage or stay dead forever.) There’s no mention of the blindingly obvious fact that trans people would be a target audience for this tech—or that most people would experience dysphoria when forced by circumstance to use a different body.

Altered Carbon and Blade Runner 2049 both seem like they’re trying to have their cake and eat it, too. They want to depict sexual exploitation, but only through the conventional lens of straight men preying on photogenic young women. They want to tell dystopian stories about oppression, but only if they can cast white male actors as the hero. Blade Runner 2049 starred Ryan Gosling as a victim of anti-android prejudice, while Altered Carbon’s protagonist is an Asian man who spends most of the story in a white body, with no acknowledgment of how this plays into whitewashing tropes. Both are noir-inspired detective antiheroes.

As Faraon points out, this fixation with law enforcement clashes with cyberpunk’s anti-establishment themes. “You have these cisgendered white male protagonists who are brooding and sulking their way through worlds where women and minorities are abused and subjugated… They’re just movies about cops, and queer people as a population are not generally well-served by cops, nor is a movie about cops all that ‘punk.'”

This may come as a surprise to some fans, but several classic cyberpunk stories are widely interpreted as trans narratives. Take The Matrix, which was written and directed by two trans women. As illustrated in this fan comic by Ashanti Fortson, The Matrix sees Neo (Keanu Reeves) abandon his old name and adopt a new appearance, escaping to be reborn in a place of freedom. His nemesis, the authoritarian Agent Smith, persistently refers to him by his deadname, Mr. Anderson (meaning “son of man,” as opposed to the more androgynous “Neo”), and wants to eliminate his newfound non-conformity.

“Ghost in the Shell is a great example of an accidental trans narrative,” cyberpunk RPG writer and zine editor Kira Magrann told the Daily Dot. Best known from the 1995 anime movie, Ghost in the Shell stars Major Motoko Kusanagi, a cyborg with a human brain inside a cybernetic body. Depicted as a beautiful, doll-like woman, the film’s iconic title sequence shows her “shell” being assembled from its component parts. The franchise explicitly illustrates the separation between mind and body, the latter of which was designed and built by outside forces.

“She questions her identity as related to her body, and if memories or thoughts do in fact make up a person,” says Magrann. “Ghost in the Shell was my nonbinary fantasy as a teenager… I can’t help but imagine how many other trans kids could be positively affected by more trans narratives in cyberpunk.”

Speaking to trans cyberpunk fans, you hear a lot about the contrast between mainstream cyberpunk and the stories being told by indie artists and game designers. While Hollywood clumsily explores oppression through the eyes of cis white cops, a handful of more interesting creators are breaking through elsewhere. For better-known examples, Faraon highlights the cyberpunk-influenced Black Mirror episode “San Junipero,” and Janelle Monae’s visual album Dirty Computer. Then at the genuinely punk end of the scale, she namechecks indie game designers like Porpentine and Aether Interactive.

Given that Hollywood still makes blatant mistakes like casting Scarlett Johansson as a Japanese person, it’s hard to be optimistic about seeing nuanced depictions of trans identity. Hence the need for some punk DIY. There are plenty of trans creators working on lower-budget cyberpunk media at the moment, telling new stories and correcting issues that were overlooked by cis creators in the past. As RPG designer Ash McAllan explains, vintage games “often mechanically label us less human.” While Cyberpunk 2020 (Cyberpunk 2077′s tabletop predecessor) allowed characters to transition, the process deducts points from their overall “humanity” score. Transphobia is baked into the game mechanics. By comparison, McAllan’s new cyberpunk RPG, In Which We Live and Breathe, “specifically allows players to create characters of whose appearance and presentation are their own, and rewards the acknowledgment of those bodies through play.”

There’s a clear divide between media like Altered Carbon and the ideas being discussed by trans cyberpunk fans online. Netflix and AAA game developers have the budget to create gorgeous futuristic landscapes, but they’re telling formulaic stories from conservative viewpoints. In the words of Neuromancer author William Gibson—perhaps the defining voice of the genre—Cyberpunk 2077 looks like Grand Theft Auto “skinned over with a generic ’80s retro-future.” It’s all about the aesthetic. It’s also an obvious example of how diversifying the creative team can only improve the final product.

Cyberpunk goes deeper than neon lighting and allegorical robot oppression, and if studios want to tell interesting new stories instead of unimaginative retreads, they should start by hiring the genre’s transgender fans.