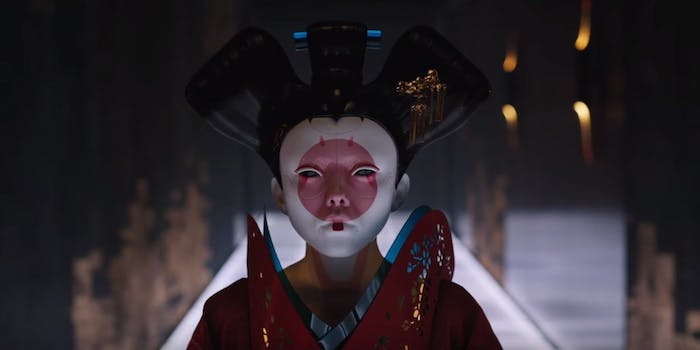 Review: ‘Ghost in the Shell’ remake is beautiful but hollow

It's a shallow remake of a classic film, hampered by troubling racist undertones.

The original Ghost in the Shell influenced 20 years of cyberpunk cinema. This presented some problems for the U.S remake, because a direct adaptation would seem hopelessly outdated compared to The Matrix or Ex Machina. So the American screenwriters (Jamie Moss, William Wheeler, Ehren Kruger) borrowed the anime’s plot structure, making some key changes to its exploration of artificial intelligence and identity. Unfortunately, they didn’t come up with any decent new ideas.

The remake obsessively recreates visual moments from the anime, while making detrimental changes to the story. In a similar vein to the disappointing Alien prequel Prometheus, it offers a clumsy explanation for something that doesn’t need explaining.

Scarlett Johansson stars as the Major, typecast as an expressionless cyborg cop. She’s a human brain inside a cybernetic body, an amnesiac Frankenstein’s Monster created by scientist Juliette Binoche. Tasked with finding the terrorist hacker Kuze (Michael Pitt), she begins to remember snapshots of her human life, kickstarting a desire to learn more about her past.

Unlike the slow, philosophical tone of the anime, this is a straightforward sci-fi action movie. The Major and her partner, Batou (Pilou Asbæk), annihilate their enemies in a typical Hollywood example of heedless police brutality. The main villain, cybernetics mogul Mr. Cutter (Peter Ferdinando) is underdeveloped and forgettable. With such a generic cast of characters exchanging bad expository dialogue, the real star is the art direction.

Production designer Jan Roelfs created a vibrant cyberpunk landscape that calls back to Blade Runner without feeling like a ripoff. Costumes by Kurt and Bart (The Hunger Games: Mockingjay) add personality and vitality to every character, combining contemporary street styles with subtle references to the 1995 movie. It’s gorgeous to look at, although the film’s most arresting setpieces were lifted wholesale from the anime.

Judged on its own terms, Ghost in the Shell is stylish but unoriginal; an acceptable sci-fi blockbuster. As a remake of an iconic film, it’s startlingly unnecessary. Instead of propelling its inhuman protagonist toward a new realm of consciousness, it’s obsessed with her origin story. This involves a troubling detail that plays into the controversy over casting white actors in Japanese roles.

Ghost in the Shell‘s racism goes beyond casting choices

Ghost in the Shell faced backlash for casting Johansson as the Major, known as Motoko Kusanagi in the anime. Detractors argued this was a perfect opportunity to cast a Japanese actress, counteracting Hollywood’s habit of prioritizing white actors. Johansson responded by saying she would “never presume to play another race,” describing the Major as “identity-less.” But the Major’s role is more complex and problematic than a white actress playing a robot with no cultural background.

In her past life, the Major was a Japanese girl named Motoko. Her former identity exists as a “ghost” within the Major’s artificial caucasian body. This trans-racial body swap concept is so politically fraught, it formed the basis for the acclaimed horror movie/social satire Get Out. But Ghost in the Shell never acknowledges the creepy subtext of white scientists transplanting a Japanese woman into a white body and erasing her identity. Instead, the Major’s backstory is presented as a simple tale of self-discovery and empowerment.

Despite being set in Japan, the film focuses on its white leads. Takeshi Kitano is the only Japanese actor with a significant role, with Japanese extras as set-dressing for the glossy aesthetic of Tokyo as a futuristic metropolis. It even includes a bastardized interpretation of a geisha, a popular theme in Hollywood depictions of Japan. Actually, her role invites questions about what was kept and discarded from the original film. Director Rupert Sanders faithfully recreated its opening scene, down to the “invisible” catsuit that conveniently makes Scarlett Johansson look naked. But he added a robotic geisha, who turns into a dehumanized, crab-like monster before Johansson shoots her in the face.

It’s hard to understand why these changes were deemed necessary or acceptable. Why not just watch the original movie instead? The remake feels clunky and shallow by comparison, failing to provide a convincing argument for its own existence.