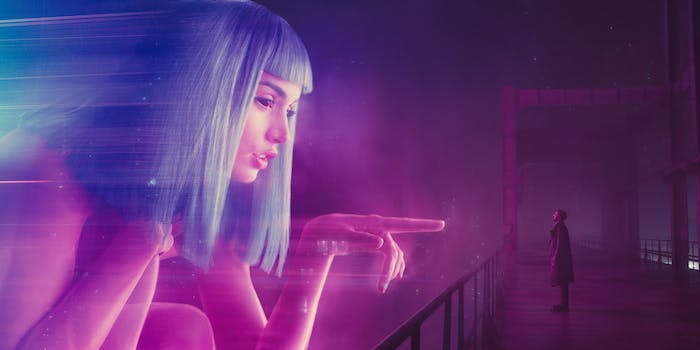 It pays tribute to the original with stunning visual design, but there's one glaring flaw underneath.

Like Casablanca and The Matrix, Blade Runner doesn’t need a sequel. But the Hollywood gods saw fit to give us one, and fortunately, they put Denis Villeneuve in charge. Blade Runner 2049 is gorgeous, and it’s well worth the luxurious 163-minute runtime, even if there are underlying issues.

Ryan Gosling stars as K, one of the new generation of android Blade Runners. Programmed to combine reliable obedience with human ingenuity, he hunts and “retires” older Replicants who escaped the system. As an allegory for slavery, it’s even more explicit than the original movie. Replicants like K are loathed by their human neighbors, yet the government employs him to dispose of his own kind. The economy relies on Replicant labor, masterminded by scientist and business tycoon Niander Wallace (Jared Leto).

Leto gets surprisingly little screentime, appearing briefly to deliver self-indulgent monologues about the future of humankind. The real antagonist is actually Wallace’s assistant, a Replicant named Luv (Sylvia Hoeks). As K investigates a case that leads him to Rick Deckard (Harrison Ford) and a potentially world-changing revelation, Luv stalks him every step of the way.

While Gosling balances the sensitivity and violence we saw in Drive, Luv is intimidatingly controlled. You can always tell she’s a machine, contrasting with the human mannerisms of Replicants like K. Yet that doesn’t make her a mindless robot—she’s just a different kind of person. She and K share a relentless drive to perform duties that undermine their own personhood, obeying their human employers. In Luv’s case, that means an obsessive loyalty to Wallace’s objectives, even though she’s visibly petrified by his cruelty. He forces her to watch him brutalize a nude, newborn Replicant woman, yet in the next scene, she’s determined to follow his orders.

This brings us to Blade Runner 2049′s key problem, because while Luv is interestingly complex, the film is still riddled with thoughtless sexism.

Raunchy holograms and sex workers (all female, of course) act as set-dressing—a textbook example of objectification. K’s holographic girlfriend Joi (Ana de Armas) is a more intentional example, but her role is mishandled. After a hard day’s work, the beautiful Joi waits at home to give K emotional support. She projects unconditional love as a receptacle for his emotional problems—and he can conveniently switch her off when she’s not needed. The film acknowledges the complicated hypocrisy of K loving a “fake” woman while struggling with his own Replicant identity, but it’s still a dire role for a female lead. It’s especially tiresome to see it after Ex Machina, a film that dissected the female sexbot trope.

On a similar note, Blade Runner 2049 is yet another dystopia that explores discrimination through the eyes of white men. It may actually be whiter than the widely-derided Ghost in the Shell, although 2049 will avoid such intense criticism. When a filmmaker delivers a visual masterpiece with strong performances from the lead actors, it’s awkward to mention the accompanying hints of Hollywood racism.

These issues feel particularly relevant in a world like Blade Runner’s, because we’re meant to think deeply about personhood and persecution. K’s job is literally police brutality. He’s a government-sanctioned killer who knows he’ll be executed in turn if he softens. Even in the earliest scenes, you can see him hiding part of himself when speaking to his authoritarian boss (Robin Wright). This kind of allegory borrows the impact of discrimination and transposes it onto someone who looks like Ryan Gosling.

When Blade Runner 2049 was announced, it was hard to feel optimistic. The original is a perfectly self-contained noir story, and it influenced the visual design of every cyberpunk movie since. Blade Runner is an aesthetic unto itself, and it’s nothing short of a miracle that Blade Runner 2049 looks so good without feeling like a ripoff. Production designer Dennis Gassner seamlessly blends those familiar, grimy cityscapes with new locations and an ambitious use of color. It’s a masterpiece of undetectable CGI and real-world set design, plus Star Wars levels of detail for technology like K’s flying car. And after 13 nominations but zero wins, cinematographer Roger Deakins must be a shoo-in for this year’s Oscar.

Far from being a cynical cash-in, Blade Runner 2049 pays tribute to the original while forging ahead with fresh ideas. Deckard’s role enriches his backstory, pulling ahead of Harrison Ford’s return in the recent Star Wars and Indiana Jones movies. So, fans will be satisfied. It’s just too bad that Villeneuve and his screenwriters (Hampton Fancher and Michael Green) had such a blind spot for the female characters, failing to update the sexism of Ridley Scott’s vision.