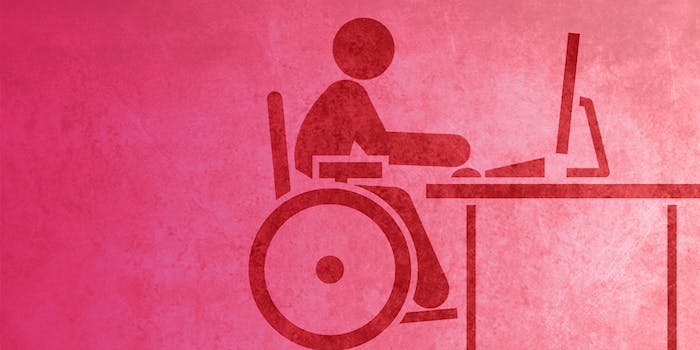 How to talk about disability issues on the Internet

It's more complicated than you think.

In January 2016, the Daily Dot nearly failed its own Web accessibility audit.

An issue of our Sunday magazine, the Kernel, explored the myriad civil rights issues Americans are faced with today, with an emphasis on women in tech, hashtag activism, racism, transgender issues, and disability. As part of the issue, I conducted an accessibility audit of 10 popular websites—including our own. In addition to evaluating physical access, I took a look at the extent of disability coverage on each of the sites we selected for review.

What I found was sobering and distressing. As a disability rights activist and commentator, I was already aware that the coverage of disability topics was fairly scant, but I didn’t realize how bad it was. The problem extended to our site, where only a handful of articles were sprinkled across various sections.

We’ve resolved to do better. The disability community is highly active online, and with 20 percent of the population identifying with one or more disabilities, we know we have disabled readers among our audience. We’re striving now to publish multiple stories a week examining the challenges and breakthroughs those readers are experiencing with tech.

Almost immediately, however, we were confronted with a serious editorial discussion: How do we describe the people at the center of these stories? Are they disabled people, or are they people with disabilities? This issue isn’t just one of linguistic caution: It speaks to a fundamental divide in the way people conceptualize and talk about disability. This divide influences the language people use, how people self-identify, and how nations like the United States and the United Kingdom develop disability policy.

When you’re a publication trying to develop a coherent style guide, of course, it presents an additional problem. Consistency is important, but what happens when it crosses paths with identity politics?

This issue isn’t just one of linguistic caution: It speaks to a fundamental divide in the way people conceptualize and talk about disability.

There are numerous models for talking about disability, but the two most widely known and popular are the medical model and the social model. The first, sometimes referred to as the medicalized model, is a person-first view of disability, positioning impairments as personal medical problems. This model is widely endorsed in the United States. Under this model, the language “people with disabilities” is used, with supporters arguing that labeling people with their disabilities first is stigmatizing. By contrast, the social or identity-first model distinguishes between impairments and disability as a social construct—people are disabled by society, not their impairments—and the terminology preferred is “disabled people.”

In an example of how the medical model works, an individual with a mid-level spinal cord injury might experience paraplegia in the trunk and limbs and some mobility issues. Our hypothetical person probably uses a wheelchair, which makes navigating the world challenging. Society could potentially provide accommodations, such as ramps to get into buildings, wide doorways to accommodate her wheelchair, and bathroom stalls with grab bars so she can comfortably transfer to and use the toilet when she’s out on the town. Those in favor of the medical model argue that her disability remains a personal medical issue that interferes with her quality of life, not the social barriers that lie in her way.

This has huge implications for disability policy at home and abroad. In the United States, the medical model’s focus on treating disability as an individual problem ignores larger structural issues. Socially, it contributes to the attitude that people would presumably want to be cured if they had a choice. It came from a place of very good intentions, but some activists are beginning to move away from it.

Consistency is important, but what happens when it crosses paths with identity politics?

Disability activists in the United States fought long and hard for a person-first model throughout the 20th century, working to change social perceptions about disability; historically, it had been tragedized, and disability was the subject of paternalism. Not for nothing did the Supreme Court infamously rule that “idiots” shouldn’t be allowed to reproduce, with Margaret Sanger advocating for similar restrictions on reproductive freedoms. Members of the disability community marched (and wheeled) alongside suffragettes, played a key role in the civil rights movement, and were courageous activists during the height of the HIV/AIDS epidemic. One of the crowning achievements of the American disability rights movement was the Americans with Disabilities Act, which extended significant protections to the disability community and, it should be noted, is named using the medical model.

The U.S. disability community continues to work to break down ableism—disability discrimination, called disablism in the social model—and stigma. It is striving to create a world in which disability doesn’t interfere with the ability to participate fully in society and live an independent life, and along the way, its members have worked hard to remove stigmatized language and attitudes. The push against “retard” and “retarded,” for example, represents years of work by groups like the Arc, which advocates for Americans who have intellectual and developmental disabilities. Thanks to their work, politicians think twice before using the R-word, numerous states and Congress have stricken it from the books, and social attitudes about what people with conditions like Down syndrome can do are changing.

Proponents argue that the social model positions disability as a social problem that must be collectively addressed. It doesn’t erase the reality of impairments or the potential issues people may face, but it attempts to identify disability as a social construct, and by nature, something that can be mitigated. For example, a patient with chronic pain won’t be magically happier if the world is more accessible, but accommodations like time off from work, better understanding of pain management, and a reduction of stigma will make her life easier. This model remains neutral on the subject of cures—something one person might want to pursue while another does not—but argues that society should be unilaterally accessible to everyone.

Under this model, our hypothetical woman with a spinal cord injury has an impairment—her spinal cord injury—but she’s disabled by society. The reason she has trouble navigating in her community isn’t her impairment, but because her built environment is constructed without consideration for people like her. She uses identity-first language to reflect the fact that she feels disabled by society. In another example, a person on the autism spectrum could love being autistic and consider it an integral part of her identity but still be angry that society prefers allistic (non-autistic or neurotypical) people.

In the United Kingdom, disability activists have also worked hard on changing social attitudes and policy. Their approach to disability has resulted in very different policy decisions. Until very recently, for example, the U.K. offered much better social support to the disability community, something that is eroding with attacks on funding. Similarly, government agencies have been forced to consider disability issues more intensively.

In the end, we decided to respect the individual decisions made by our diverse writers and editors, which is why you’ll see both terms on the Daily Dot.

Writers who discuss disability issues—whether or not they have impairments—tend to endorse a particular model, and they believe in it quite strongly. These models are akin to social ideologies, creating a framework for understanding and talking about disability. In the face of this, we couldn’t force all our writers to use “people with disabilities,” although it is the term preferred in the AP Stylebook and by groups like the National Center on Disability and Journalism, which heavily influences our style guide, along with those at many other publications.

Conversely, we couldn’t require writers to turn to “disabled people,” as not everyone endorses the social model. Depending on personal views, one term or the other may be highly offensive, and writers shouldn’t be put in the position of being forced to use terminology they consider outdated or offensive in their work—especially when the term ties directly into their discussion about a social issue.

In the end, we decided to respect the individual decisions made by our diverse writers and editors, which is why you’ll see both terms on the Daily Dot. We’re also building a comprehensive in-house wiki to better inform our contributors about common issues of importance to the disability community. Regardless of the language used, we hope our coverage will help serve the cause of creating a world in which those individuals feel as included in society as anyone else.

You’ll also be seeing a wider spectrum of disability content in the coming months as we invest in covering political and social issues that involve the disability community, along with the wide world of disability tech, entertainment, and just plain fun. We’re excited—and we hope you are too.